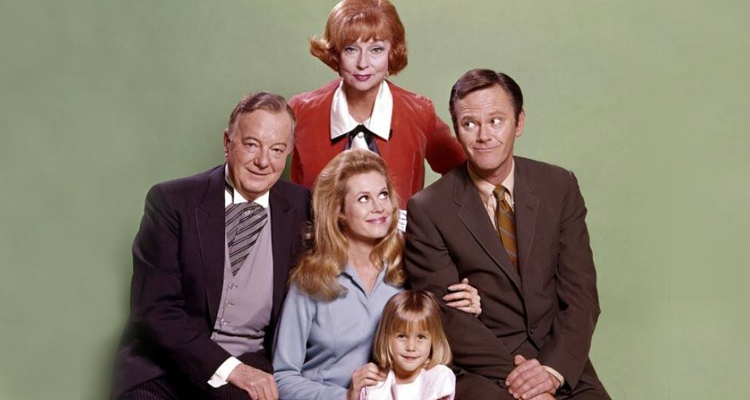 ‘Bewitched’ and Be Gay!

When I was a kid, we watched a TV sitcom called “Bewitched.” Running from 1964 to 1972, it featured Samantha and Darrin — a young, shiny, white, middle-class, suburban couple — everything you should aspire toward.

As in all marriages, marrying a witch means marrying your spouse’s whole nutty family. But Sam’s relations have one central thing in common: they’re all witches.

Allegory? About queerness? Hell yeah! “Bewitched” was loaded with some of the gayest stuff around, just brimming under the surface.

Good and beautiful witch Samantha (played by Elizabeth Montgomery, who was the loveliest, most supportive queer friend imaginable) marries the mortal Darrin Stephens (who, after a recasting, was portrayed by gay actor Dick Sargent). Sam’s mother, Endora, was played by a scenery-chewing Agnes Moorehead, one of the (allegedly) more prominent ladies in “Hollywood’s Sewing Circle” — you know, those women who, erm, socialized closely together, so to speak. Reliable source Paul Lynde said this of Ms. Big Red Head: “The whole world knows Agnes was a lesbian — I mean classy as hell, but one of the all-time Hollywood dykes.”

As Endora, this fabulous character actress goes all out as a bitchy drag queen godmother with a helmet of flaming red hair, eye makeup that flows on and on, the largest chunky jewelry around, and the brightest prints in the pre-Carnaby Street days.

Sam’s father is Maurice (played by actor Maurice Evans). He’s also Endora’s mostly absent husband. He exists in what looks to be a continually partying, mostly open relationship with Her Royal Redness.

Esmeralda (rendered by lesbian actress Alice Ghostley) is the Stephens’ housekeeper/nanny. Of course, she’s also a witch, as you can’t have a prying mortal in such a fundamentally witchy familial position. And don’t forget their long-suffering neighbor Abner Kravitz (personified by George Tobias).

Finally, there is the irrepressible Uncle Arthur (played by the equally irrepressible Paul Lynde of “Hollywood Squares” fame, known widely as “Liberace without the piano”).

“Bewitched” was the #1 rated sitcom for four of its eight years. Yet clearly, the witch-hunting days of the mid-1960s inform some of the episodes’ scripts. Even measured doses of coming out carry risk; the witch hunters can pull you down, tarring and feathering included.

Wishful queer viewer supposition? Nay nay! The show’s producer, Danny Arnold, actually underscored this in a 1965(!) interview: “I saw a great opportunity to accomplish something … (we) pointed the finger at bigotry. (People are) prejudiced about witches — who are definitely a minority group … It is a direct parallel to some of our social problems of today.”

There are even episodes where Samantha fights for the rights of witches! But first, she must win over her own parents. Endora laments: “I must say I can’t see where I went wrong. I brought you up as a proper witch, taught you the best incantations … and here you are, married to a mortal!”

Mom does manage a truculent truce when Sam tells her father she’s married a mortal. The tuxedoed Maurice cannot believe it. His daughter, with one of those creatures? The horror! Objects in the room explode, and more blow apart as his anger increases.

Endora attempts to intervene: “Times have changed, Maurice. This happens in the best of families.”

Sam interjects: “Well, it has. I’m married. It’s over and done with.”

Maurice thunders back: “I can’t understand it! A girl of your background, your breeding … It shows a complete lack of respect!”

Her father was the ultra-conservative actor, Robert Montgomery. She hewed to the most liberal of lines. She hated oppression in every form and fought tirelessly for the rights of all. That included working for global peace. She particularly supported the disabled, as well as Black and Indigenous peoples.

But her time, money, publicity and fundraising especially went to queers and AIDS. She was among the first to advocate for people with AIDS, AIDS research and AIDS charities.

Even closer to home, she best friended HIV-positive Dick Sargent when he was outed by Star magazine in 1991. She urged him to publicly come out and provided support. Her love and all of her efforts did not go unnoticed: in 1992, they reigned as co-Grand Marshals in Los Angles’ Pride Parade.