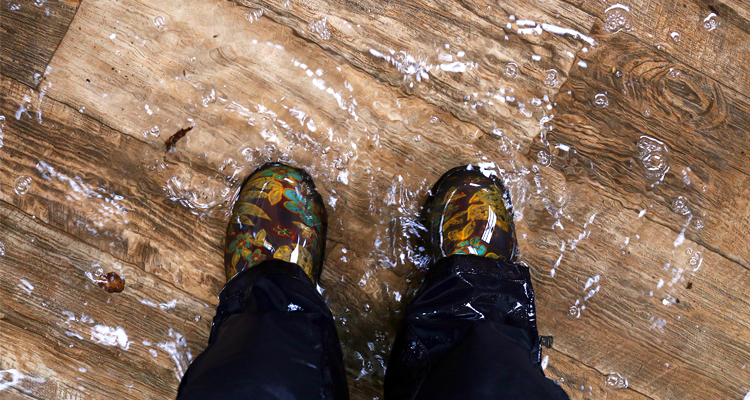 I’m so glad I went to the pool that day. During the pandemic, my community didn’t open it to residents, so this year I’ve tried to make the most of being in the water. Upon walking out of my garage with my gear in hand, I noticed the wet pavement behind our building and wondered if it had rained. As I realized we hadn’t had any cloudy weather in several days, some neighborhood kids rolled by on their bikes and pointed for me to look up. That’s when I realized where the water was coming from.

I live in a townhome adjacent to several others, and my neighbor’s balcony directly beside mine was overflowing with water — which means the water was coming from inside her home. As the kids and I discussed our next move to notify the absent neighbor of what was happening, several insurance agents on foot rounded the corner to witness the flooding and told us the neighbor was on her way. At the time I didn’t think about anything but how awful a call that was for her and hoped it would quickly be taken care of.

It was my son who first noticed the smell in his basement playroom. It was carpeted, so I didn’t notice it had been wet until I walked in the room to investigate where the odor was coming from. I inherited that carpet from the previous owner, so whatever it contained was now wet and emitting that smell. And it was overwhelming.

Knowing it had to be runoff from my neighbor’s flooding, I called my insurance agent, who put the wheels in motion. The carpet and padding were extracted, yet the smell remained. It’s hard to describe the smell, since I had never quite encountered it before, but upon further assessments and cuts into the drywall it was determined that wet insulation was the cause. It was explained to me that not only the insulation, but also the leavings of any small creatures who had burrowed and defecated in the material, were now soaked and evidently rancid. Good to know.

I wish I could say that the process for repairing water damage was as fast as reading this column. As I write, my basement is still not repaired a month or so after the initial incident. With the help of dehumidifiers and fans, however, I’m happy to report the smell has subsided. Unfortunately, my neighbor has been unable to live in her home, as furniture and damaged flooring had to be removed. And I’ve witnessed the glaring difference between laborers who care about their craft and others who want to argue and justify their lack of effort.

Had I not taken a break and gone to the pool that day, I might not have known what had happened to my neighbor’s home or been able to recoup the damages to mine. I also learned not to take for granted the things you don’t see in your home, like the plumbing or electricity, that really make a home function efficiently. Much like life, if you don’t consider the health of your internal structure, eventually the ornamental outside will get ruined — and that damage will definitely affect the people around you.