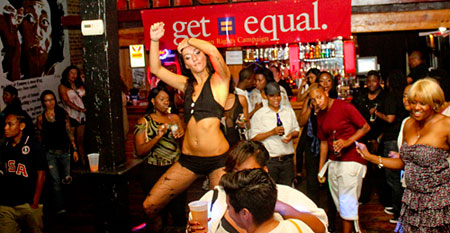 DJ M, My Sister's Room and Twee threw down Aug. 16 with its "We Love Biggie" edition of Dance Fever at the lesbian bar in East Atlanta. Women (and some guys) packed the dance floor to the beats of the 80s, 90s, disco Top 40 as well as hip hop.

The GA Voice arrived too late on Aug. 17 to witness any action, but word was from party organizers and witnesses that "Bad Girls Club" filmed a scene at MSR. And a fight broke out. Apparently the reality TV show that takes a bunch of bad girls, puts them in a house and records the hilarity and violence and, well, embarrassing situations arise is now filming in the ATL and will also be filming at the Pure Heat festival in Piedmont Park on Sept. 2 during Black Pride over Labor Day weekend.