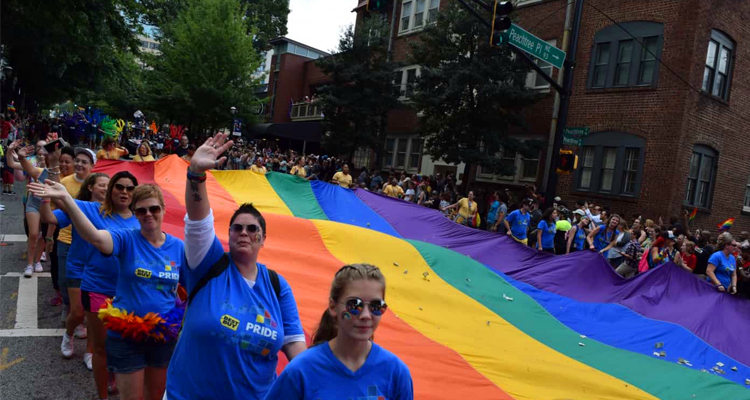 This October, Atlanta Pride makes its long-awaited return to an in-person festival after two years of cancellations due to COVID-19. From October 7 through 9, thousands of people from around the country will gather in Piedmont Park to enjoy this year’s diverse lineup of entertainment, vendors, marches, the annual parade, and so much more.

While Atlanta Pride is making its return, that doesn’t mean COVID-19 is no longer a concern. The Atlanta Pride Committee (APC) is being mindful of the pandemic, as well as the recent monkeypox epidemic, and urges guests to do the same.

We are aware of the high stakes right now given that this is the first festival back in person after two years on hold because of COVID,” Shentoria Cobbs, APC’s Communications and Development Strategist, told Georgia Voice. “The world just looks different right now, so we’re definitely being cognizant of that, encouraging folks to get vaccinated if they’re able to. At the event, masks will be provided, and we will be encouraging folks to wear masks [and] wash their hands. If folks are feeling sick, we encourage people to get tested and stay home. That’s the same for monkeypox as well, just because the events will obviously be a lot of people close to each other. We want to prevent anything from happening if we can.”

Health safety might not be the only concern on people’s minds. Music Midtown, a popular music festival hosted in Piedmont Park every September, was canceled this year — not due to COVID-19, the culprit behind the 2021 cancellation, but because of a new gun ruling that contradicted their policies. An expansion to the Carry Safe Protection Act made it illegal for businesses with shorter-term leases, like Music Midtown, to enforce a gun ban.

However, Atlanta Pride attendees should not fear. While they cannot ban guns from the event, APC is strongly encouraging “bring glitter, not guns,” and there will be ample security throughout the park to keep everyone safe. Police will be present, but only officers who specifically volunteered to work Pride.

“We will have security throughout the park for the entire festival, as well as a police presence,” Cobbs said. “We’ll have officers present that want to be there; we specifically send out requests for them to volunteer because they want to be there and want people to be safe. There will also be outsourced security. Security will have very obvious T-shirts on, so they will be very visible.”

“Obviously, it’s very scary to think someone would want to harm folks in a public place,” she continued. “… As per Georgia law, if you’re in a public place you have your Second Amendment right, but we just encourage folks to leave them at home. They’re not needed at the festival.”

After a two-year hiatus, Atlanta Pride is coming back with a bang.

The weekend kicks off on Thursday, October 6 with the Official Kick Off Party at 7:30pm at the Atlanta Contemporary (535 Means St NW). Featured guests including Silky Nutmeg Ganache from RuPaul’s Drag Race, Dotte Com, Drew Friday and DJ Abby Dear, and DJ Esme provide the beats.

As usual, over 300 vendors will be selling goods, food, and drinks as well as sharing information and education. There will also be the annual trans, bi and pan, and dyke marches on Saturday, the first of which starts at 1:15pm.

Sections of the AIDS Memorial Quilt connected to Atlanta will also be on display in the park.

“I think that’s a beautiful way to remember folks that were devastated by that disease and encourage folks to raise awareness of that issue,” Cobbs said. “It’ll be a great physical installation in the park for folks to be able to participate and educate themselves.”

The annual parade closes out the festival. Cobbs said more than 300 entries have been submitted to participate in the parade, and Grand Marshals Gerald Bostock, Valeria Cantos, Gabrielle Claiborne, Paul Conroy, the Policing Alternatives and Diversion Initiative, Renee Montgomery, and Rhea Wunsch will be honored.

In Cobbs’ words, this year’s Pride promises to have “something for everyone.”