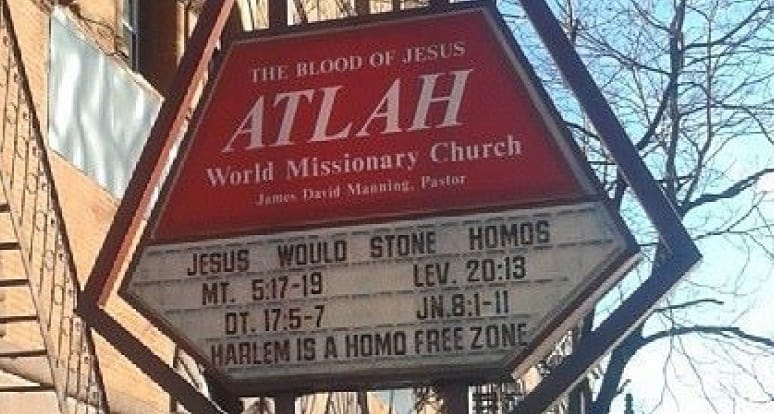 1. “‘Homosexual’ has the ring of ‘colored’ now, in the way your grandmother might have used that term, except that it hasn’t been recuperated in the same way.” The New York Times with a report on “The decline and fall of the ‘H’ word.”

2. “We are determined to find unity in our diversity.” The American branch of World Vision, one of the the country’s largest Christian charities with more than 1,100 employees, announced Monday that they will now permit gay Christians that are legally married to remain employed there.

3. “The homosexual activists are flat-out lying about what Jesus would do regarding the detestable, abominable, diseased practice and act of homosexuality. They have been lying and saying that Jesus would simply love.” The Harlem pastor who posted several anti-gay messages on his church’s sign, and who got a surprise visit from a bold lesbian that you might have read about in yesterday’s 5 LGBT Things, responds to the criticism.

4. “If I wanted to be good at football, there’s no way I could be gay.” A gay former college football player talks to Outsports about being closeted at Vanderbilt and Navy.

5. HuffPo with a breakdown on Hobby Lobby v. Sebelius, the Supreme Court case being heard today which is ostensibly about President Obama’s health care law and the requirement that employers provide health insurance that includes coverage for birth control, but which the writer (and many others) are calling “the future of gay rights.”