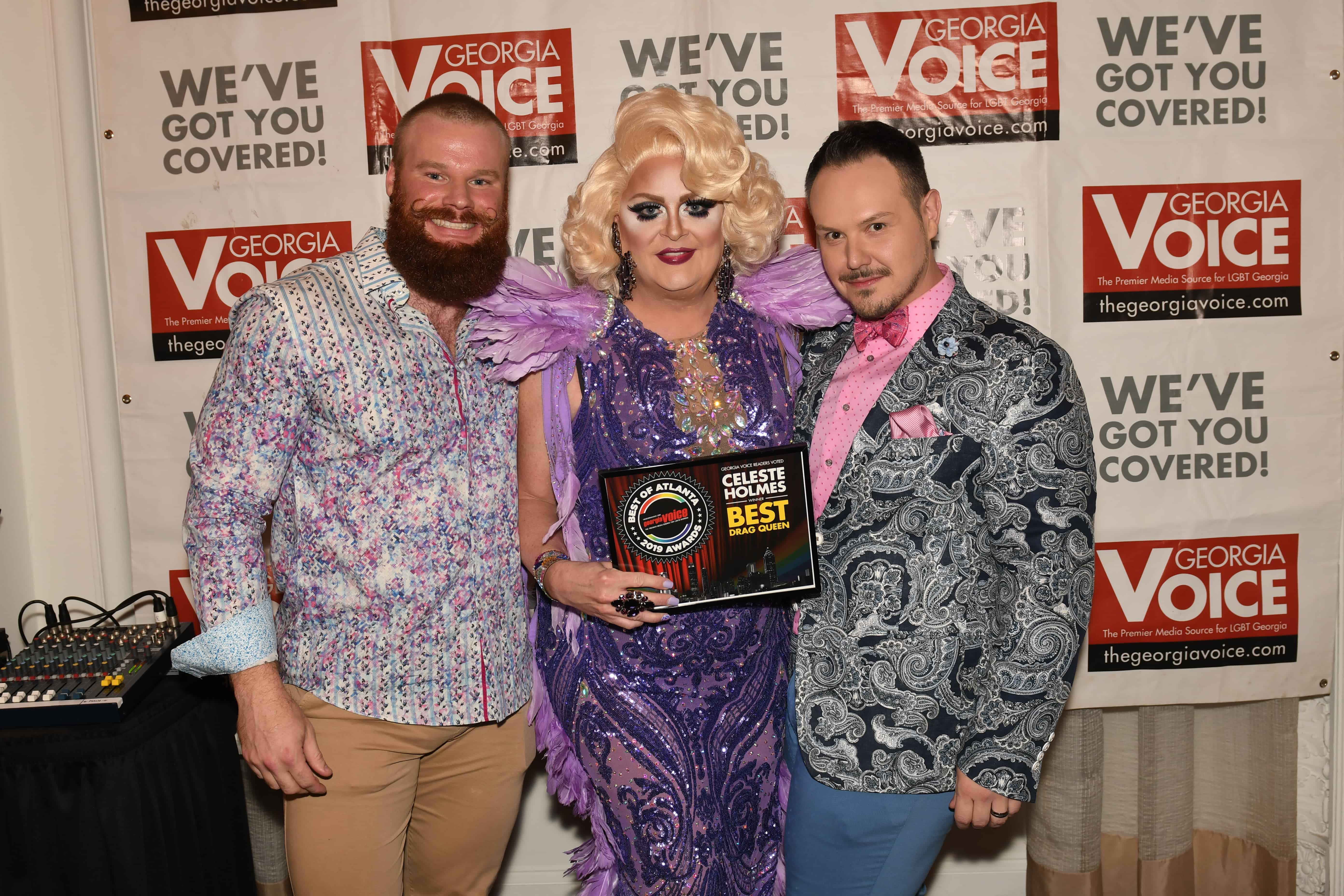 Abrams made waves nationwide in 2018 during her campaign for governor of Georgia as the first black woman in the country to be a gubernatorial candidate for a major party. However, she’s made history countless times; in 2010, she became the first woman to lead either party in the Georgia General Assembly and the first African American to lead in the House of Representatives. Before her run for governor, she served as the Georgia House Minority Leader from 2011 to 2017. Don’t expect her to stay quiet in the future, as she’s one of the democratic party’s future hopefuls for a possible presidential run.

He’s a household name when it comes to LGBTQ advocacy and activism in Atlanta. Rick is the founder and former Executive Director of Lost-n-Found Youth, a non-profit to end homelessness among LGBTQ youth, as well as the Executive Director and CEO/Founder of Rainbow House Coalition, this year’s winner for Best LGBTQ Non-Profit. 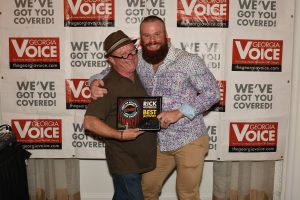 Winner of 2018’s BEST OF actor award, this experienced professional piano player, Broadway veteran, and concert producers is winning his way through Atlanta. His production credits include the Fox Theatre 75th Anniversary Show, Lenox Square 4th of July, and the Underground Atlanta Peach Drop, but you may best recognize him from his famous piano sing-along at Campagnolo Restaurant and Bar! 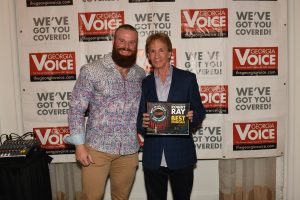 You’ll find Jimmy Cox serving up drinks of all kinds at the new Woof’s location in the Armour District of Midtown Atlanta. It’s the city’s only gay sports bar, and with dozens of big screen TVs, the best bar food, and bartenders like Cox, it’s the perfect place for sports of all kinds. Customers say Jimmy is always friendly, genuine, and attentive. With a huge bar, Jimmy is sure to be able to serve you up exactly what you want. No matter your choice of drink — a classic mixed drink or one of the delicious beers Woofs has on tap — the drink Jimmy serves you will be delicious. 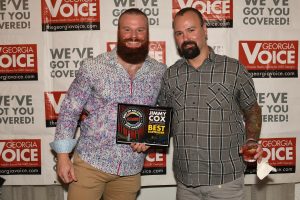 There’s no beat too big for this seasoned DJ and one of Atlanta’s newest residents! Having played almost every major circuit event worldwide — including the Winter Party Festival and White Party Miami — Gauthreaux serves up high-intensity circuit music to crowds of thousands! Most recently, Joe is part of the DJ lineup for the 2019 Joining Hearts Opening Party at the Heretic. His production career features numerous official remixes of mainstream artists like Troye Sivan, Rita Ora, Blondie, and more. 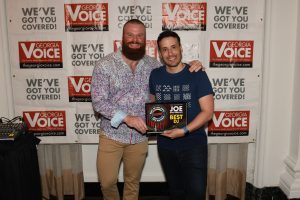 Runners-up are Neon the GloGoBear and Mike Pope

A transgender FTM drag king who brings his Dark Prince aesthetic, plus a barrel of laughs, to each of his curated performances. Hayden recently participated in the Glitz Glam Show at Mary’s, a monthly competition to be crowned Mx. Glitz, and performed in Asheville, NC at Scandals Nightclub. 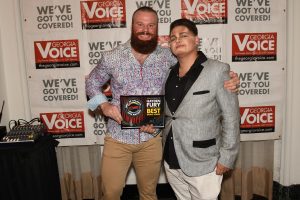 Runners-up are Mystery Meat and Perk A $exxx

This LGBTQ-inclusive filmmaker directed and produced the award-winning film Breaking Through, a full-length documentary that follows several openly LGBTQ elected officials as they share their stories of self-doubt and triumph. She also directed, produced, and wrote Surviving the Silence, which tells the story of Colonel Patsy Thompson who presided over the board that dismissed Colonel Grethe Cammermeyer from the military for being a lesbian. 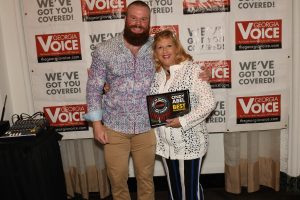 America’s Sweetheart from Blake’s on the Park, Celeste touts a number of pageant titles: she’s a former titleholder of Miss 50 States and received the title of Miss Renaissance in 2013. This year, Celeste was crowned Miss Joining Hearts 32. You can see this pageant superstar every Friday night at 11pm at Blake’s in her show Celestial Fridays. 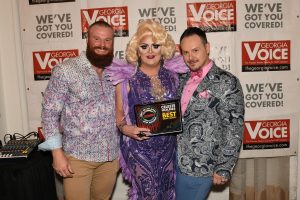 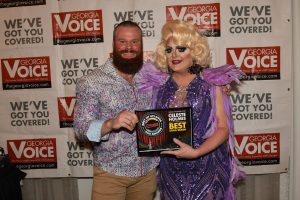 This seasoned talent has a diverse work history in the Arts, Music, and Creative Industry, with experience in both illustration and design. He has designed a number of logos for local businesses, events, and organizations. Brad is also the “Supreme Overlord” of Neon Horror, where he parodies pop culture into twisted pinup-inspired designs, which you can buy and wear in the form of stylish and unique T-shirts. 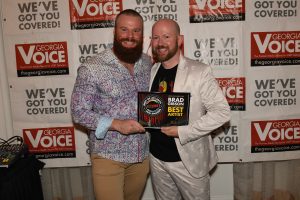 Chef Gillespie prepares both refined and rustic dishes at his restaurant Gunshow in East Atlanta, where he offers a bold, interactive take on the traditional dining experience. Kevin’s dishes are presented on rolling carts and trays where diners can choose what they want to order a la carte. Along with his restaurant, Kevin has written a cookbook called Fire in My Belly, which includes more than 120 recipes that celebrate quality ingredients made specifically for home cooks.

Payne is a playwright-actor-director who has made notable appearances in Enchanted April at the Weird Sisters Theatre in 2018 and onscreen in the 2013 film Identity Thief. You may best know Topher for his LGBTQ-themed plays Perfect Arrangement, which snagged him a nomination for the 2017 Lambda Literary Award, and Angry Fags.

Not only a comedian, but also a host/emcee, drag artist, actor, and superhero for all folks, Brent has been a long-time Atlanta favorite, winning Best Comedian for the seventh year in a row! Brent serves up a unique brand of queer comedy, as his performances combine stand-up with drag. You can regularly see Brent at the famous Laughing Skull Comedy Club in Midtown.

He’s the mogul behind Atlanta’s favorite, ROXX Tavern. Dean both owns and operates the gay hotspot, as well as the surrounding land. His restaurant takes home two awards for best patio/deck and best Sunday brunch!

A 2019 new category all about covering the news that matters to our community! You may recognize Blankenship from Channel 2 Action News where he anchors every morning and noon. The Los Angeles native came to Atlanta and joined the WSB-TV family in 2007, where he’s covered a number of stories important to Georgians. Fred begins his and your morning with a smile, positive energy, and the local news you need to know.

He’s synonymous with what’s hot in the ATL. Bill utilizes his nightclub experience, expert skills in marketing, and an eye for upcoming trends to be the mind behind the hottest parties in Atlanta, including most recently a Poolside Fashion Party hosted by Mr. Turk and Doggies on the Catwalk Foundation. 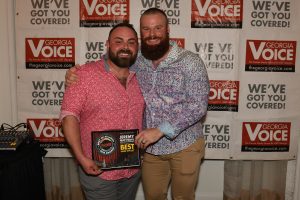 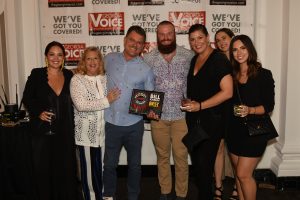 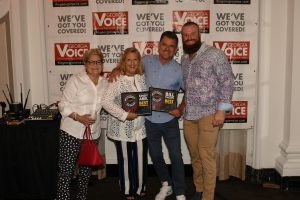 Experience is on Jeremy Matthews’ side as a senior stylist and educator at Helmet Hairworx. He harnessed his styling skills at Paul Mitchell Beauty School and now takes pride in spreading his knowledge to Helmet’s junior team while also helping customers make the best choices for their style and hair.

Need to relax while a professional works a few kinks out? Frank Santore has been providing body work and massage therapy to the metro Atlanta community since 1996. He provides personalized therapy, in a safe, clinical, yet personal environment, to specially cater to each client’s personal needs.

Broussard practices with Carlton Fields, representing clients in a wide range of business disputes. Barret is also very active in the community, particularly in the LGBTQ legal community. He is the vice president/president-elect of the Stonewall Bar Association and serves as the Georgia representative to the National LGBT Bar Association. 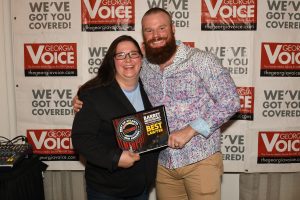 He’s spent 14 years as a licensed realtor and is a specialist in Atlanta Beltline properties. William, who is a member of the Atlanta Gay and Lesbian Chamber of Commerce, supports his clients by employing successful negotiation skills on their behalf and applying proven strategies to get their offer accepted. 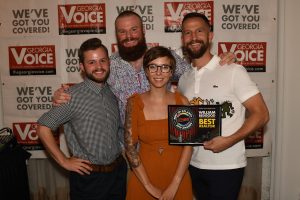 Jeremy uses his 16 years of experience to provide professional advice and personalized guidance that fits his clients’ unique life goals and investment challenges. 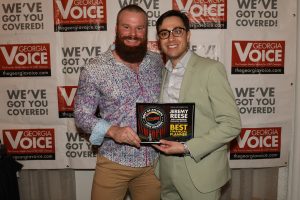 An Adult Nurse Practitioner at AbsoluteCARE, Hackworth diagnoses and manages acute and chronic illness. Terry is certified by the American Academy of Nurse Practitioners and works both independently and in collaboration with other healthcare professionals at AbsoluteCARE. In his spare time, he works throughout the community volunteering and even is a local favorite drag queen in area LGBTQ bars! 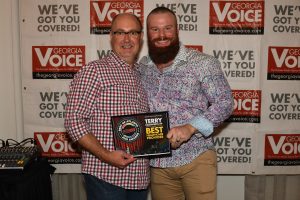 Dr. Chip Hill has taken home Atlanta’s best dentist award since 2015 and continues to provide exceptional service to the LGBTQ community. He provides everything from cosmetic dentistry, dental implants, veneers, and teeth whitening to bonding, dental care, and general dentistry to Atlanta. Chip has been practicing for over 18 years and keeps up with the latest in dental education and technology. 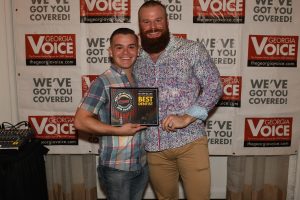 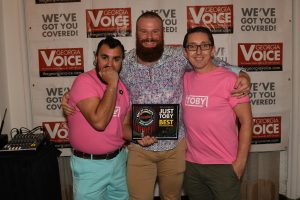 She was last year’s runner-up and this year’s winner! This experienced, effective chiropractor serves the Decatur and Metro Atlanta areas. Loretta specializes in treating sports and repetitive stress injuries and has completed a post-graduate certification in extremity adjusting. 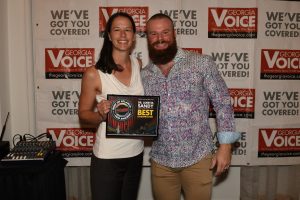 Both the owner and tattooer at Kingdom Tattoo, Ryan has been a professional tattooer since 1999 and a constant in the Atlanta tattoo scene for the last 15 years. Ryan offers customers a wide range of tattoo services from custom back pieces to small designs, all created with top-notch quality and exceptional customer service. 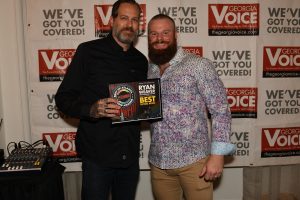 Lim is a non-binary educator, community leader, and activist. They are a member of the Atlanta Pride leadership and the founder of Pridefull Pedagogy, an LGBTQ education consulting firm that helps educators develop inclusive classrooms, curriculum, policy, and student programming. 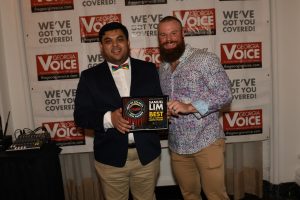 She began practicing dermatology in Atlanta since 2010 and became part of Georgia Skin Specialists in 2012. Holly treats patients of all ages for any skin-related concern medical, surgical, or cosmetic. She is board-certified, a fellow of the American Academy of Dermatology, and a member of the Atlanta Dermatological Association.

Find the rest of this year’s winners here!