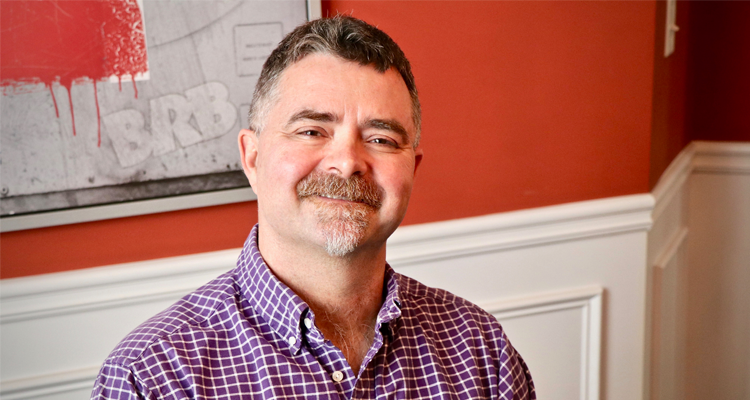 Ever since he was a boy, Jim Farmer has been obsessed with movies. What early cinema classic did the future Out On Film festival director consider one of his favorites? John Carpenter’s “Halloween.” “It was just so well constructed … it was just so pure and simple.” Jim’s cinematic tastes have evolved since then, but his love for great cinematic storytelling only grew.

In his younger days, Jim knew that film had to be part of his life. “I was always enamored with film. Ever since I was old enough to go to the campus theater, I thought, ‘I want to do something like this’”. The city of Atlanta itself has seen a sharp influx in business from the film and television sector. From big budget superhero films to reality TV shows, the city is awash with film crews, production companies and entertainment creatives. Atlanta is becoming a major hub for film, complete with Atlanta branches of well-known film schools, but back when Jim was thinking of pursuing his passion for filmmaking, the opportunities were few and far between. “Nowadays, everywhere you go in Atlanta … you can learn to become a filmmaker or learn to get in the business. Back then, opportunities were very, very limited. Especially in this area.” Of course, there were schools that catered to cinema-craft, but nowhere near Georgia. So, while attending The University of Georgia, he tried to cherry-pick the classes that had anything to do with film and television, helped with finding programming for the local campus station and began his love affair with writing about film. After graduation, he bounced from vocation to vocation but ultimately moved to Atlanta and returned to his life’s passion.

LGBTQ film festivals can be found all over the world, with some of the oldest ones popping-up in London, San Francisco, New York, Copenhagen and right here in Atlanta, Georgia. Out On Film is a well-established festival that was created to, according to its mission statement, “inform, entertain, educate, and enrich the LGBTQ culture by showcasing films by, for and about the LGBT community and its allies,” and they’ve been doing just that for the past 33 years. Out On Film started out as a segment of the larger Atlanta Film Festival and branched off on its own in 2008, and that year Jim took over as Festival Director. Since then, the festival has grown by leaps and bounds. Just over the past six months alone, the festival has been awarded various accolades, like its first grant from the National Endowment of the Arts, a place on the Top 20 Film Festivals in North America reader’s poll conducted by USA Today, and designation as an Oscar® qualifying film festival, meaning that a Best Drama Short entry that wins at Out On Film is eligible for consideration for the Best Live Action Short Academy Award®. Jim feels that all of this recognition will ultimately not only help the festival, but the city as well. “It’s good for us, but it’s also good for Atlanta.”

A major key to the success of Out On Film has to be Jim’s personal goal of making the festival more inclusive. “If I had to program a film festival just for gay white men, I would be bored silly because that’s not who our community is … I want to try to find films that speak to everybody.” Whether it’s an Asian film about a Vietnamese Opera singer or documentary about LGBTQ refugees, the festival is sure to have something for everyone. “When you come to Out On Film, you get to watch it with your community. You get to experience it … really celebrate that moment together.” The festival also likes to spotlight works from local filmmakers by choosing features that help focus on issues that the local LGBTQ community may be facing. “With the festival we want to showcase film from around the world, but also want to showcase film from our backyard as well. It’s very important to highlight what is happening in Atlanta, in Georgia.”

But Jim is still expanding the scope of the festival. Just last year, he helped launch the Atlanta Queer Arts Alliance. “It’s a way to really cross-promote each other and just remind people of what a rich tapestry of queer arts there are in Atlanta.” Besides the yearly festival, Out On Film started collaborating with different LGBTQ organizations to hold screenings all year round as well as teaming up with Atlanta Pride to offer insights into the LGBTQ entertainment community. At the moment, they are planning a panel dealing with lesbian, transgender, African-American and non-gender conforming filmmakers to showcase at the upcoming Atlanta Pride festival.

This self-described “Georgia peach” has really dedicated his life to putting queer cinema on the map. The passion for LGBTQ film just radiates off of Farmer, which has helped him create a unique atmosphere in which if you walk into his festival feeling alone, unheard, or invisible you will walk out feeling like a member of the Out On Film family forever.