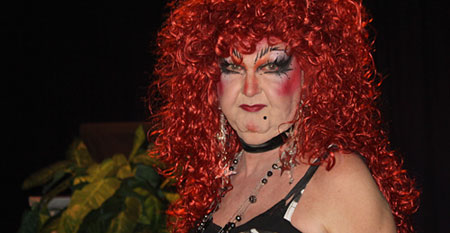 Lily White (pictured above), who has gone through tough times recently including the loss of his mother, his house burning down and also suffering a heart attack, thanked Brown in a raunchy and sincere way, recalling the late-night partying of Backstreet days to the present day of Brown holding fundraisers to help White through difficult financial and emotional struggles.

“After these past few months that have been so hard on me, Charlie did an amazing thing. She she got all of my friends together, all of the bars in Atlanta together…she got everyone together in Atlanta that was gay and/or straight and gay-friendly and for one purpose and for one purpose only, to help her best friend get back on her feet. I am that best friend, i am getting on my feet. And I am moving back to Atlanta soon,” White said to applause. 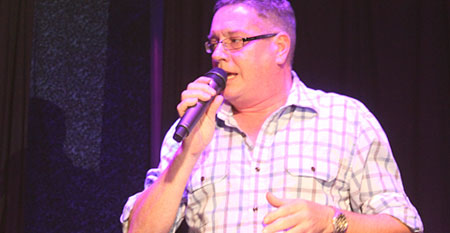 Johnathan Murphy (pictured above), owner of LeBuzz and founder of the Marietta Rainbow Fest, thanked Brown for paving the way for so many drag queens as well the contribution to forming Atlanta’s gay history, saying without Brown’s contributions, there would be no Pride in Atlanta or elsewhere.

When Brown, 62, took the stage to speak, he thanked his husband of 36 years for all his success. He also said he has been performing and holding fundraiser for more than 41 years to give back to the LGBT community.

“We’re screwed every way we turn as being gay folks. If we can’t make it easier on each other, don’t fucking come out,” Brown said.

“So come out, party and have a good time. And one toast i’ve always done, ‘No matter who you or where you are, if you’re black, white, straight or gay, if you finding happiness along the way, please don’t let no motherfuckers get in your way,'” Brown said.

To view more photos from the Roast of Charlie Brown, click here.

Top photo: Mr. Charlie Brown laughs with the crowd at some of the raunch humor of Wednesday night’s roast of the drag legend held at LeBuzz to kick off Marietta Rainbow Pride weekend. (by Dyana Bagby)