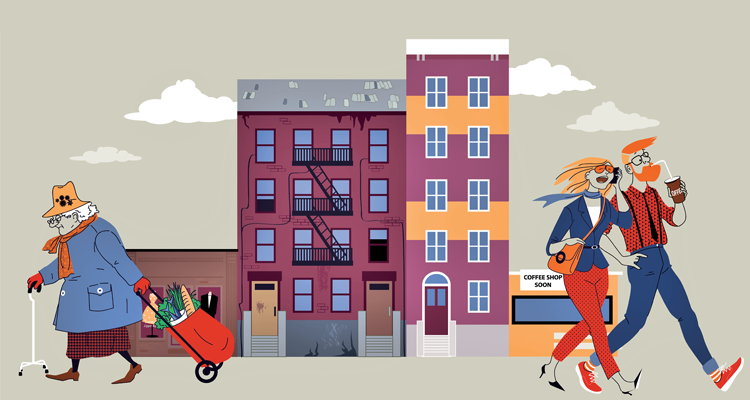 Atlanta is not the city it was 20 years ago. In the past two decades, Atlanta has boomed in development and commercial expansion, but it has come at a cost. From 2000 to 2014, Atlanta was the fourth fastest gentrifying city in the U.S., according to a federal study released in 2019.

Gentrification is the displacement of people living in an area due to an influx of wealth and property development driving up the cost of living. While rising property values may seem like a positive sign of growth for the city, it’s only so for those who can afford to keep up. Atlanta’s poorer residents — some of whom who have lived here for decades — are being forced out of their homes, and people of color are disproportionately bearing the brunt, according to a Stanford study. Black people in particular — who make up about half of Atlanta’s population — are seeing the impacts of gentrification, and several of them are organizing against it.

The History of Gentrification in Atlanta

When the city hosted the Olympics in 1996, Atlanta had an intentional focus “cleaning up” the city — or, more specifically, the city’s public image — by literally removing residents and unhoused individuals. According to Burnett, this was done through the closure of housing projects.

“Folks were given vouchers to move out of housing projects under the misguided and just false description that concentrating poor people, and particularly poor Black people, in one location leads to all these negative impacts on communities and cycles of intergenerational poverty when, in truth, the state disinvested from these housing projects, so folks were living in really poor conditions,” she said. “… Then there’s the narrative that a lot of people are familiar with unhoused folks being given bus tickets to get out of the city for the Olympics so that publicity around the city was positive.”

Flash forward a decade to the recession and housing crash of 2008, and property investors took advantage of the devaluation of homes by buying up and sitting on properties.

“[The housing crash] facilitated investors, largely from outside of Atlanta, [to come] in and buy those properties for really low amounts and just sit on them and hold them until property values rose again so they could make a profit,” Burnett said.

In the years since, property values have spiked near projects like the BeltLine, the proximity of which to Black communities spiked property values by more than 100 percent over the course of less than a year, resulting in the foreclosure of the homes of those who could not afford the property taxes.

Today, many investors aren’t even sinking their money into flipping homes for family residences, but are opting for short-term rentals like Airbnbs.

“There are entire blocks in Southwest Atlanta where there are just Airbnbs,” Burnett said. “We’re in this predicament where there are very few housing units in general, so that strain on supply increases demand and allows folks to charge exorbitant prices for oftentimes very substandard housing.”

The Work of Community Movement Builders

Gentrification is a hard beast to control, especially when there are millions of dollars backing investors up. So, instead of attempting to “end” gentrification – if even such a thing is possible within our current economic framework – Community Movement Builders are more invested in a preventative approach.

“A lot of our work is simply to keep folks in place,” Burnett said. “We have a stabilization fund where we pay up to $750 in rent, mortgage, utility, and home repair assistance for Black residents. We give away free grocery, hygiene, and cleaning supplies to Black residents in Pittsburgh and also throughout South Atlanta…. We do a lot of food sustainability work with our community garden.”

They also engage in other organizing efforts, including demonstrations at open houses, attendance at neighborhood association meetings, and push backs when developers ask for permits. While their work is largely focused on uplifting the community so that they won’t be forced to leave, Community Movement Builders are also interested in fostering a narrative that’s honest about the reality of gentrification.

“Everyone deserves a nice community, but we can’t do it at the expense of one another,” Burnett said. “How can we [begin thinking] about creating systems where you’re not relying on the value of your home to go up for your family to have wealth? We want to think of housing as a human right and not a commodity.”

Black Atlantans who are interested in supporting Community Movement Builders are encouraged to join the organization. You can do so, as well as donate and learn more, through their website, communitymovementbuilders.org.