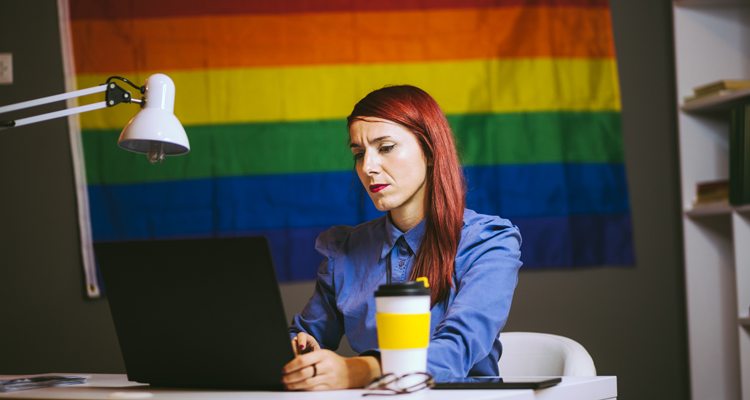 LGBTQ in the Workplace

In a state with no LGBTQ discrimination protections, finding a safe and validating workplace can be difficult for LGBTQ Georgians. The value of a diverse and inclusive work environment is tenfold, both for LGBTQ employees and the company itself. According to GLAAD, working in an LGBTQ-friendly workplace can increase LGBTQ employees’ job satisfaction and work commitment, lead to better mental and physical health, and allow for stronger relationships between co-workers. LGBTQ inclusion can lead to lower legal costs for the company regarding lack of discrimination lawsuits, more work done because of increased productivity, and lower health insurance costs due to increased employee wellness. In fewer words, LGBTQ inclusion in the workplace benefits everyone. Whether you’re an LGBTQ Atlantan looking for a new job or an employer looking to make your company more inclusive, here are six things that constitute a positive, LGBTQ-friendly work environment.

This is the most obvious way a company can protect and support its LGBTQ employees. With only five municipalities in Georgia touting protections from discrimination on the basis of sexual orientation or gender identity — Atlanta, Chamblee, Clarkston, Doraville, and Dunwoody — being LGBTQ can easily mean termination. When the company has explicitly stated they prohibit anti-LGBTQ discrimination, you can rest assured that you won’t lose your job for being gay, trans, etc., and you’re protected if you happen to have a nasty homophobic co-worker.

This ties closely into number one. However, coming out at work can be a difficult barrier to cross even with anti-discrimination protections. LGBTQ employees who don’t feel comfortable embracing their full identity at work can experience higher levels of stress and anxiety, according to the Williams Institute, affecting their mental health, work performance, and physical health. Feeling safe not only from explicit discrimination and harassment but microaggressions as well — being treated as the token gay person, receiving inappropriate and prying questions, etc. — can improve both the job experience and your job performance.

BONUS: You’re not the only LGBTQ employee. Of course, with only about 4 percent of the American population identifying as LGBTQ, you may be the only one because of sheer probability. But still, it’s nice to have someone you can relate to. Solidarity and whatnot.

DOUBLE BONUS: The company has LGBTQ people in positions of power. There is no better assurance that a company is pro-LGBTQ or you’re safe being out than your boss being an out lesbian or the CEO identifying as trans.

When a company doesn’t only protect you from discrimination but offers you benefits specific to your identity or orientation, not only does the company want to keep you safe, but they want to keep you happy, too. These kinds of benefits can include domestic partnership benefits, which allows unmarried couples who share a household to reap the same benefits as married couples, and transgender healthcare coverage, with employee health insurance covering transitional surgery or hormone therapy.

Now, with the popularization of “rainbow capitalism,” this really isn’t a surefire way to tell if a company will really support and protect you as an LGBTQ employee (they may only be interested in the profit). However, if they make the effort to say, “We support all of you,” by taking part in their local Pride parade or proudly putting rainbows up around the office during June, chances are they’ll support you, too.

BONUS: The company’s charitable arm, if they have one, donates to pro-LGBTQ causes, candidates, or organizations. Lookin’ at you, Chick-fil-A.

ERGs can be a source of information for all employees, while creating contact with other employees who share your viewpoint or experience. If you’re at a smaller business, you probably don’t have access to one of these. However, if you’re working at a huge company with numerous other LGBTQ employees and don’t have access to a group, consider talking to the company’s leadership about creating one.

Chances are, the place you work doesn’t perfectly meet all of these standards. However, as long as you’re respected and your opinions are listened to, you can create a more inclusive environment in your workplace. If you can talk to HR about anti-discrimination policies, speak to leadership about creating an ERG, or rise the ranks and institute change yourself, your place of work can become even more inclusive.