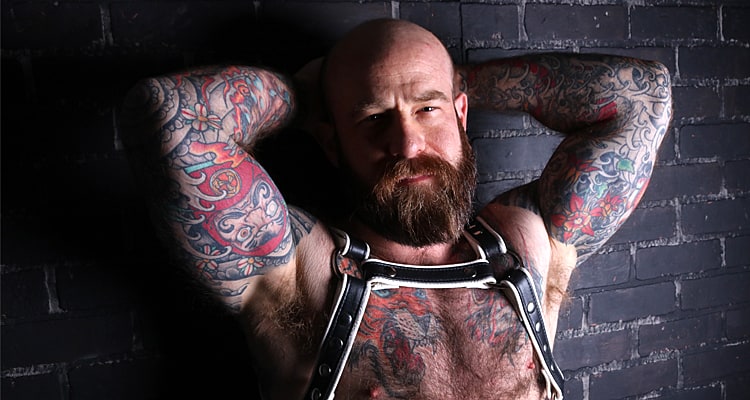 In today’s society, the adult entertainment business is still considered a taboo filled playground with artificial orgasms, overzealous “stars” looking for the next big scene, and in some cases, those scenes that many would deem completely unacceptable to mention over a glass of wine. If you ask Jack Dixon, an adult entertainer born outside of Seattle and raised in Florida, there’s a lot of stereotypes that follow his line of work.

Dixon moved to Atlanta in 2002 where he worked through several careers, most recently as a chef, and the owner of a local bakery up until 2017. He then moved away to San Francisco where life evolved rather quickly. So how did he fall into the lap of the adult film industry, and why is his line of work considered so taboo to many here in the Southeast? We caught up with Dixon and he opened up about his life in front of the camera!

First off, it’s obvious you love tattoos! How many do you have, and do you have any piercings? “If you count each sleeve as one and my entire back as one it would be 17. I have a Prince Albert piercing, and my ears were pierced as a kid but they have grown in since.”

Why do you think people consider porn such a taboo subject, especially in the South? “I think there is a lot of religious influence telling people at a very young age sex is bad, being gay is bad, your genitalia should only be used for reproduction, so on and so forth. If you step out into the world, sex is viewed very differently depending on the country you’re in. Humans are sexual beings and sex is a natural human function. Just because you have a certain kink doesn’t mean you’re a bad person (with the obvious exception of injuring others, children or animals without consent), you’re just different, not bad.”

Why did you choose Jack Dixon for your stage name? “I was sitting at my computer and was like I need a name for this escorting ad. I just thought of Jack Dixon like Jack dick. It was kind of bad humor in my brain. I found out three months later there is another guy by the same name in the industry. He’s cool with sharing the name so that was a good thing because it would have been confusing to change.”

What do you like most about your career as an adult entertainer? “I like the flexibility and being able to have a personal life, which I didn’t have when I owned my bakery. I am well compensated for what I do and I’m very grateful that this has worked out so well for me thus far. I am also able to travel a lot which can be good and bad.”

What do you hate the most about your career as an adult entertainer? “It can be lonely because I travel a lot. Sometimes I’ll have friends meet me on trips which is nice, but I’m usually traveling up to 50% of the time. The social media upkeep and aspect can be a lot too. I know I’m putting out an image of a sex object but that can also wear on me too. Additionally, I can be a bit of a hard sell for someone looking to date; there can be a jealousy component of some sort to it all. People love a porn star, not as many people want to actually date one.”

Why do you think people consider escorting a taboo subject? “It’s an annoying American double standard. They think escort and think street hooker. They think you’re doing it against your own will. They have been told by the government that it’s illegal therefore it must be bad. Prostitution is God’s work. If I can provide someone with a connection they are craving, then that’s a great gift to give someone. Plus, we all know how hard it is to find a well-hung man who knows what he’s doing, right?”

Is there a dark side to escorting that maybe makes it a more taboo than other forms of sex work? “I think there is a lot of drugs associated with the industry because a lot of the industry is young and want to have fun, or people are escorting for other reasons than to make an income. Drugs have been in any industry I’ve ever worked in. There are good sober people in the sex industry who have a lot of knowledge and a lot to offer other than just sex. Chances are everyone knows someone who has had sex for money, been a cam model, a stripper or some other sex worker at some point. I’d just say not to judge someone’s character by their profession.”