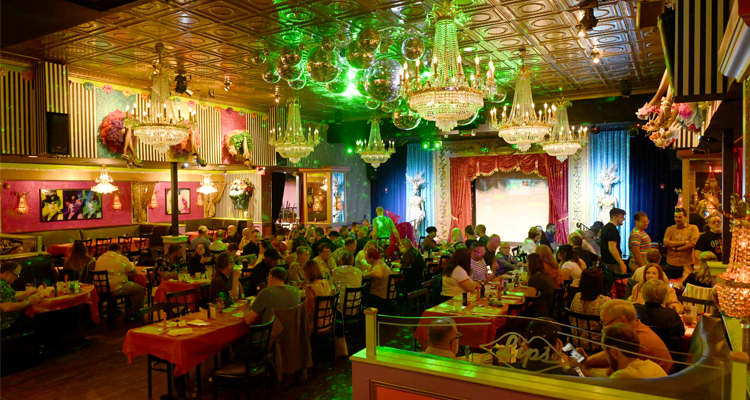 Picture this: you’re out to dinner, celebrating a special occasion. The food is delicious and the company is even better, but something’s missing. If you said “drag queens,” then Lips is the place for you.

Lips is the premier establishment for drag dining in Atlanta. The business was founded in New York City by Yvonne Lamé. The idea was to create a dining experience that rivaled New York’s beloved gay nightlife.

“I thought, ‘Wouldn’t it be fun to go to a restaurant that was like going to a club?’ Like you would hear good music, there would be a good atmosphere, drag queens and fun,” Lamé told Georgia Voice. “Lips is a place to have a good time, to let your hair down — or, as a drag queen would say, put your hair up!”

What started as a simple weeknight drag open mic eventually transformed into a national empire.

“My partner had a bar that was successful called Rome,” Lamé said. “I started a night there called Pop Tarts; it was sort of like an open mic for drag. I gave the newbies a stage. The night really took off. One of our original partners had a restaurant that was floundering, so they had the space, so we pitched the idea of Lips. They thought it was a good idea, so we built it out. We brought a lot of the drag queens that were working at Rome over, and we put it all together, [and] added some glitter to give it a more drag atmosphere. There was a magazine called New York Magazine. They wrote a blurb and took a picture, and after that article came out the phones never stopped ringing.”

Since its inception, Lips has expanded and now has locations in San Diego, Fort Lauderdale, Chicago, and Atlanta.

The Lips experience begins when you walk through the door, when you’re met with a glam palace fit for a queen.

“Atlanta is definitely one of the grander Lips,” Lamé said. “The experience starts the moment you open the door — you’ve arrived into another world. The decor is way over the top, it’s definitely something a drag queen would do. The chandeliers on the main floor are 15 feet tall. It’s ornate and very drag, it’s not like your typical restaurant.”

Lips differs from other drag venues by not limiting the drag to the stage. The party starts the moment you sit down.

“The difference that makes us stand out is our waitresses; they’re drag queens,” Lamé said. “That was the concept: let’s bring the party to the table. They’re coming over, they’re dressed up, they’re campy. If you go to other drag brunches, they’re really just doing a show and you’re not getting that interaction before the show.”

The queens will serve you up a delicious dinner and cocktails (or brunch and bottomless bloody marys and mimosas if you’re there on Sunday afternoon!), and the show begins! Lips Atlanta currently has seven different shows happening five days a week, each as fabulous as the last.

On Wednesdays at 7pm is Twisted Broadway, hosted by Brigitte Bidet. Catch the biggest and best of Broadway as the queens perform hits from every decade with a demented twist. On Thursdays at 7pm is The Divas, the night when all the stars come out — also hosted by Brigitte Bidet. On Fridays at 7 and 9:45pm and Saturdays at 6 and 8:45pm is Glitz and Glam, a show filled with over-the-top glamour hosted by Christian Valentino. Then on Saturday nights at 11:30 is the newest 21+ show, Taboo: The Dirty Show, hosted by the Mistress of Seduction, Taejah Thomas. On Sunday, catch the Dragalicious Brunch at 11:30am and 2pm, hosted by Taejah Thomas, and then Showstoppers at 6:30, hosted by Ms. Blush.

If you’re looking to party, celebrate, and have fun, Lips Atlanta is sure to deliver.

“Most of our guests leave with a smile on their face. If not, we did something wrong,” Lamé concluded. “At the end of the day, if you want to have a good time, you want to have fun, then Lips is the place for you!”