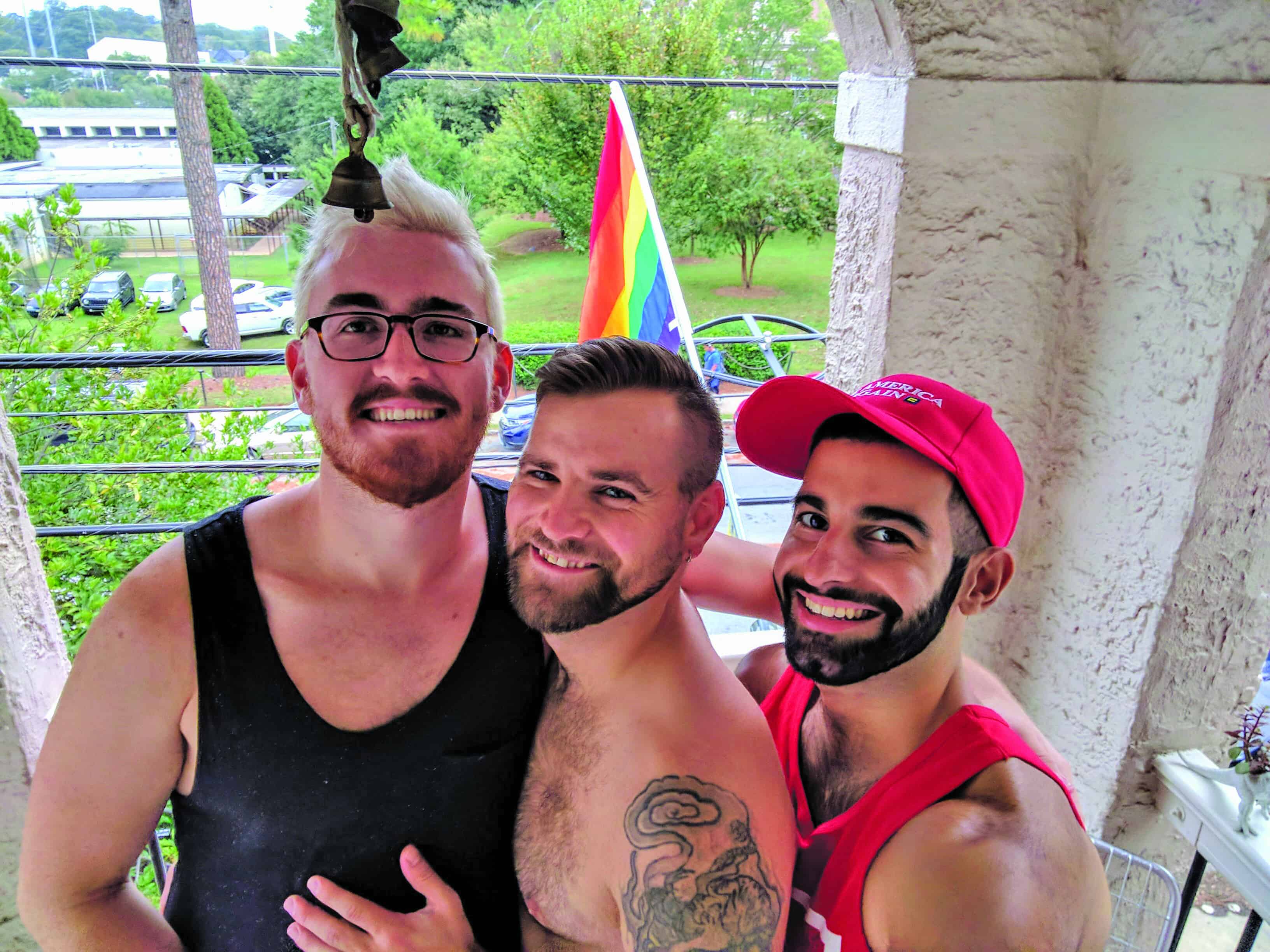 There are very few things Spencer and Tamer will not try. In a sense, it shows just how dynamic and fluid their relationship really is. Fluidity is key here, opening up to new experiences and encounters that normally wouldn’t cross either of their radars on the most opportune of days.

“I didn’t think I had the capability to emotionally care about more than one person,” explained Tamer. “A month before we met Daniel, if you asked me if that was a possibility, 99 percent no and one percent maybe.” It’s quite a taboo subject in the deep red South where he, Spencer, and their third partner, Daniel, live. But they’re in a city that welcomes diversity and has a keen eye for all things unique. So how did their three-way relationship, otherwise known as a thruple or triad, come to be?

Spencer and Tamer have been together for more than seven years and engaged for the past two. They met back in Chicago while the two were in college. Spencer, a year ahead of Tamer in school, soon graduated and moved out to San Francisco for work. Tamer followed shortly after graduating, landing a job in the tech industry, but their careers both led them here to Atlanta. They got engaged and thought, “What’s next?” Both were working, following their career dreams and living life in Atlanta as a gay couple in an open relationship. That’s when they met Daniel.

“We met him at Blakes and started seeing him every once in a while. One of the rules in our relationship at the time was that we didn’t spend the night anywhere, but in spending time with Daniel, he started spending the night with us a couple times,” said Tamer. “So it already became different than our other encounters. The more time he spent with us, we started naturally developing an emotional connection with him in a way that we wouldn’t with regular hookups.”

About three months in, the three acknowledged they were something more than just fuck buddies. Boyfriends, if you will. Daniel had reservations but the excitement of a new adventure in love and sex was the overpowering factor. “It seemed like convenience in a way. They have each other, but I don’t have to always be there and be available, emotionally available because they have their own relationship,” he said. “There were some nerves going into something that was so established and me trying to figure out where I was going to fit into it.”

For Spencer and Tamer, the uncertainty fell not at what could happen at the beginning but in the end. Would one of them develop a stronger connection with Daniel or would their seven-year relationship crumble under the new circumstances? “I think it was scary in the sense that it was easy for us to say that no matter what happens we still have each other and if this goes south, we should default to each other as the foundation,” said Spencer. Tamer responded right after, “Just as we never thought this was a possibility, you never know how things are going to end up.”

They didn’t have a framework to do their research before diving in head first. There were no other thruple relationships they could ping their curiosity off of. They simply played it by ear and allowed their new relationship to exist without any qualms. Two years later, the three are enjoying life in a different perspective. Spencer explained that it wasn’t just one big relationship, but four different ones between the three. He describes each one as having its own unique character. Daniel agrees.

“We’ve created our own relationships within this larger one. I have a different relationship with Tamer than I do with Spencer. There are things that I expect from him that I don’t expect from the other. They expect me to be trash!” Daniel said, laughing alongside Tamer and Spencer. “They have very much maintained their status as a couple. This is their primary residence. They’re each other’s primary partner, and I fit in there somewhere.”

When they’re out in public, they own their unique way of love, although they do get questions from skeptical acquaintances on just how their relationship seems to work or even still function. It’s more so centered around the idea of being completely open, said Tamer.

”I did get shit every once in a while for being in an open relationship. A subset of the LGBTQ community is very judgmental of open couples just because they think it wouldn’t work for them, so they’re also judgmental of others doing it,” he said. “But I haven’t seen any thruple-specific discrimination.”

It gives them good hope for their future together as a triad. But how will their relationships with each other change, if at all? For the duration of this new adventure, Daniel has been in nursing school. His thoughts on his future aren’t quite planned out. “Who knows, once that’s over and I have all of this free time, what expectations am I going to want out of the relationship that I don’t currently have?” he said. Spencer’s response coincided with Daniel’s rather seamlessly: “This is nice for him because he can enter and exit as he pleases. Once he has time to be a full-time boyfriend, will he want something dedicated one-on-one with somebody?”

Spencer and Tamer have put their wedding plans on the back burner to focus on careers and simply just living life with their “third.” They’re ok with taking it slow. They’re ok with the dynamic that has defined the past years of their three lives. And in their opinion, there’s plenty, if not unlimited, love to go around. “Love comes from a lot of different places. You don’t take some from one place and put it somewhere else, but there’s not a limited supply,” Spencer said.