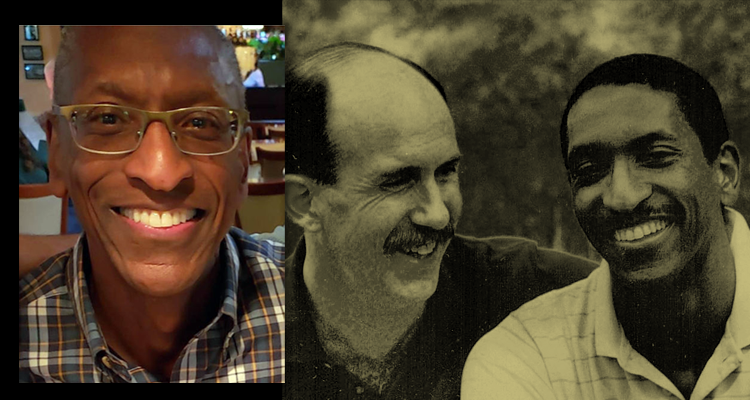 This is the fourth article from “Reclaiming Our Time: A History of Atlanta’s Black LGBTQIA Life”, a series of editorials that chronicles one of the city’s most definitive communities.

At a time when titles of distinction are too freely given or self-proclaimed, it should be soundly understood that Dr. John Peterson was a true legend. Dr. Peterson, a psychology researcher and professor emeritus at Georgia State University, was one of the first researchers to focus primarily on HIV transmission among Black gay men. He did not limit his inquiry to rates of condomless anal sex or numbers of sexual partners. John sought to uncover the real reasons driving stark HIV health disparities between Black and white gay and bisexual men. Through scores of studies and thousands of interviews, John and his colleagues asked the questions about Black gay men’s realities that white counterparts had neither the interest nor competence to consider. His evaluative work on HIV risk reduction highlighted the value of cultural affirmation as a component of Black gay men’s interventions. John believed that a heightened sense of community, belief in one’s own inherent worth (i.e, a deeper love), as supported by robust infrastructure (daytime spaces and activities beyond the club), could help reduce new infections and sustain the wellbeing of Black gay men of either HIV status.

The Deeper Love Project, an HIV prevention program I developed at AID Atlanta, was based upon a three-session intervention pilot John had co-created. I was one of several Black men who were taught and inspired by him. I never took his class at Georgia State University, but I was nonetheless one of his students. By the time I had started presenting Deeper Love in 1997, many of our “angelic troublemakers” Joseph Beam, Audre Lorde, Essex Hemphill, and Marlon Riggs (a dear friend of John’s) had passed on. John was a surviving genius who outlived friends and contemporaries to guide successive generations in their endeavors to save the lives of Black gay men. Like a doting uncle, he could dole out praise or compassionate criticism about my work. He cared enough about me and the community to which we were both committed to not let me falter in deed or in spirit.

One of the palpable marks of greatness John bore was his fertile and fervent generosity. He gave far beyond the requirements of his field. He supported Neena Smith-Bankhead, the first Black woman to lead AID Atlanta’s HIV prevention department. His mid-’90s collaboration with Smith-Bankhead secured major funding and heightened the agency’s investment to address the most heavily burdened population. Through the Y.A.M.S. (Young African American Men’s Study) Project, John convened key Black gay men’s organizations and programs (Second Sunday, Deeper Love Project, Brothers Back-To-Back, NAESM) to acquire critical knowledge about younger men’s social networks and norms. The forceful brilliance of John’s leadership opened his collaborators’ eyes to recognize the full measure of their obligations to community.

By 1997, Second Sunday had become Atlanta’s largest Black gay men’s organization. John gave Second Sunday a kind of support they could not have gotten from any other individual. When Second Sunday organized its Freedom Retreat in the autumn of 1997, John volunteered time and labor to facilitate breakout sessions about HIV stigma for sero-segregated groups. He authorized Adodi Muse, a gay Negro ensemble, to incorporate quotes from his research for “Burning From Your Touch,” a staged dramatization of Black gay men’s beliefs and practices performed for a Second Sunday audience.

The last time I worked with John was for the Tony Daniels Leadership Institute. Charles Stephens, Amistad Arromand, John, and I co-organized a forum for select Black queer men to identify urgent needs, resources, and strategies. Our team ranged in age from mid-sixties to early thirties. Again, I was privileged to work shoulder-to-shoulder with brothers of different generations toward a common goal. My brother Maurice Cook joined me to tell participants about our late friend Tony and his contributions. And when I heard of John’s passing in June 2021, I first thought of this our last joint effort. This conjured a second memory, one of John and Tony Daniels at the 1997 Atlanta Black Pride (less than one year later, Tony would be killed in a car accident en route to the 1998 D.C. Black Pride). Second Sunday was holding its Pride event “Where The Boys Are” in downtown Atlanta. At the peak of festivities, that enduring ritual, the dance floor circle formed around the most spirited dancers. In the center were John and Tony strutting about without restraint. And long-legged John, who on occasion referred to himself as “Leontyne,” goose-stepped in full regal abandon. He looked utterly joyful, as if this was his moment. He looked as if he felt at home, as he was among his brothers, those to whom he had given so much of himself.

If you are an HIV prevention specialist working with Black gay men, your work has been influenced by the contributions of Dr. Peterson, as well as those he worked with and/or mentored. Dr. Peterson helped mold other illustrious Black men in HIV prevention and research (Dr. David Malebranche, Gregorio Millet) who themselves have made history. If you are a Black gay man (or however else you may or may not identify), you should know that Dr. Peterson helped enable your individual survival and the survival of your tribe.

Two weeks before the 40th anniversary of that first public notice about AIDS, this titan who endured the worst of it and remained HIV-negative succumbed. Less than one month before Black gay men launched a 2021 remembrance of Second Sunday, an event at which he might have shared precious narratives, he was suddenly gone. As before in life, and now in death, John has very few peers, and virtually none within the area of HIV prevention research for Black gay men. It is imperative that we hold him in our highest esteem for he has certainly earned no less than the superlative. By the force of his unshakable faith in Black gay men and his good works, the most enduring manifestation of that faith, he ascends. He holds a reserved chair in the upper room of our history.