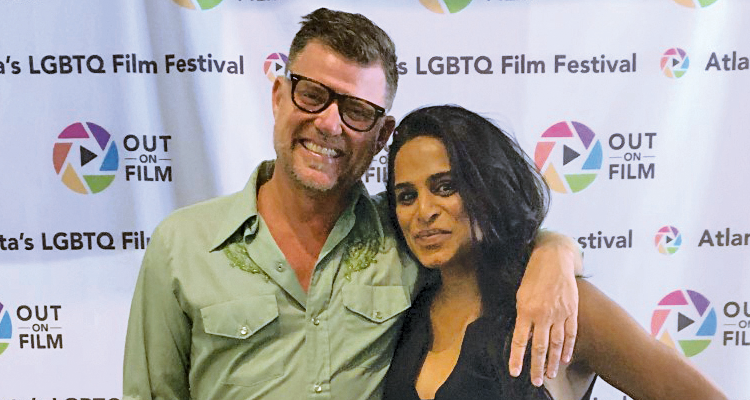 One on One with Feroza Syed

For the past year I was honored to write a monthly column for Georgia Voice with the condition that it would be focused on politics. The daily nightmare of #45 has been exhausting. Thankfully, the election is over, Joe Biden is now our President and already, within just four weeks, America is more drama-free than ever. The majority of us have finally released one gigantic sigh of relief. I am calmer than ever, feel more positive than I have in years, and as a result I want to shift my column to focus on people in our community who are making a difference every day and helping to make our city and the entire world a much better place. For my first “One on One” piece, I caught up with trans and political activist Feroza Syed to see how she is faring after the election.

Bill: Miss Thing, OMG it is so nice to see you — virtually, at least!

Feroza: Girl, it so good to see you as well. I’ve been alone mostly for 12 months quarantining, and I am ready to get this vaccine. I’m the health provider for my parents, so I got the vaccine finally coming. When I get it, I’ll probably proposition the National Guard if they’re providing it ‘cuz it’s been 12 months without any action.

B: I hear ya. I’m so over the mask, but I’m curious if we’ll ever really get rid of them for good. Influenza is at the lowest ever, and I just wonder if the day will come when we can go to a sold out Beyonce show without a mask.

F: Unfortunately, this entire COVID situation was handled so improperly that I fear we will be wearing masks for a while.

B: Ugh. I am so over it. I am not going to lie: I have pandemic exhaustion. Honestly, I have political exhaustion as well. I had to take a step back with getting involved in the Presidential race because I truly had to protect myself just in case #45 won again. I helped in ways that I could but seeing you hitting the streets every day, knocking on doors, really going the extra mile made me so happy. When Dekalb County called the Jon Ossoff race I was literally screaming for you! You really played a huge part in both Warnock’s and Ossoff’s wins; you have to be proud! Are you exhausted?

F: I am definitely tired, but I don’t feel like I did anything different than others did as well. I think my social media presence helped inspire other people to get out and knock on doors, but I couldn’t have done this alone. Im grateful to have worked with the Democratic Party of Georgia, Fair Fight, and the New Georgia Project, orgs who’ve been doing this work for years. I just try to use my voice to help lift up all the amazing work that these organizations were already doing. This election was different for me because every single identity I have was on the ballot. I know when I go hard I will have no regrets. There was not one more door I could have knocked on, so the night before the election I went to sleep with peace. I had done everything I could possibly do.

B: You sure did, you should be so proud of yourself. Right now, I just need a rest. Someone called me this week to see if I would get involved with the upcoming Mayor race, and I was like “Girrrrrrl I need a break, and I think people need a break from my voice as well. Call me back in eight months. Daddy needs to get his beauty rest.”

F: It’s going to be hard for me to rest — thanks to the last administration, it’s going to take years to get back all the trans rights that were taken away from us. Transphobia is such a huge problem thanks to conservatives. Our trans brothers and sisters are getting murdered every day. There are currently 18 anti-trans bills that states are trying to pass as we speak. There is no rest for the weary, unfortunately.

B: The visibility of the trans community seems highlighted more than ever. The amount of people coming out and saying they are gender fluid, gender non-conforming, etc. is stunning. It kind of reminds me when gays and lesbians kind of became hip in the ’90s. It was the birth of metrosexual men. Being gay was becoming fashionable. Do you fear that all the people that are coming out as genderfluid overshadows the importance of the trans movement?

F: No, I think it’s beautiful! I would almost call it an awakening. Society is finally coming to a space where we are allowing the spectrum of the binary to fade in the back, and it’s letting people be comfortable to express themselves anywhere on that spectrum. Breaking down that barrier is helpful for the trans movement. When we don’t focus so hard and obsess over gender, and we allow people to just be who they are, it brings everyone along and ultimately makes it easier for everybody to just be themselves.

B: I think there is a misconception that just because you are gay that you should automatically understand all the new labels and the spectrums of gender and identity. It’s confusing, and I know myself and others in our community need to educate ourselves. You do such a great job explaining it all, you should teach a course! It’s obvious that you love our city so much though: if you could change one thing about it, what would it be?

F: We truly need a proper LGBTQ community center. Every other major city in the country has one. The Rush Center was trying to be that, but there was just too much drama going on within those walls. We need a place where every resource you need is under one roof and it should be a place where everyone is comfortable. Atlanta is great though. I have travelled everywhere, and it’s a misconception that we don’t keep it real in the South. You are always going to get the truth here in the ATL. It may not always be pretty, but people will tell you what they think and serve it to you with a smile.