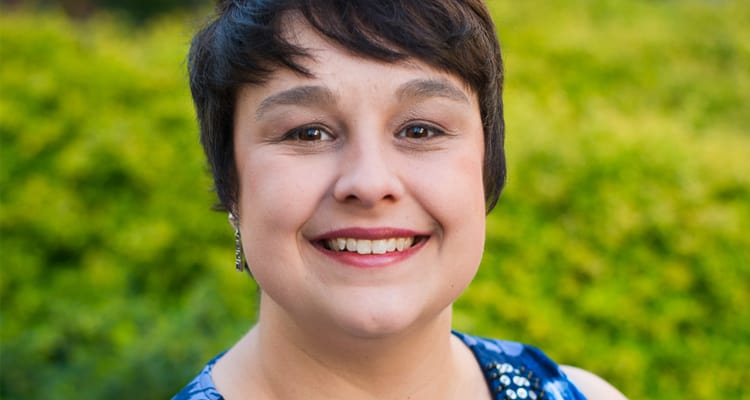 In The Interim: Audrey Krumbach

Two weeks after Rick Westbrook, co-founder and executive director of Lost-n-Found Youth, resigned, an interim was announced. The nonprofit has named Audrey Krumbach as his replacement, serving until a more permanent member is found. We caught up with Audrey to chat about her new appointment and the future of one of our most beloved institutions.

“I feel so honored to get to be part of Lost-n-Found’s mission, and so many people have reached out to express support,” she tells Georgia Voice. “It’s clear how passionate Atlanta is about caring for our young people, and ensuring that LGBTQIA young adults and teens have a place to be safe, healthy, and to access the resources they need!”

Audrey grew up in the faith, the daughter of a Methodist preacher, and attributes her upbringing when she talks about early charity work. “As a young teen, I was part of several work trips — the kind where kids paint houses — and I learned on a few very hot summer afternoons that my faith could inform a way to be useful in the world.”

After college, she attended seminary at Garrett-Evangelical, a United Methodist school. “I did not end up pursuing ordination, but mostly because I am more passionate about working in the community.” After grad school, Audrey worked for several years with Chicago-based Reconciling Ministries Network. “It’s the LGBTQ advocacy organization working to help the United Methodist Church be more inclusive of everyone,” she says.

She then worked with women’s leadership initiatives, spending the last three years at Living Room. “Living Room is an awesome organization too few people know about.” Living Room provides housing resources for people with HIV and serves more than 1,700 clients annually with seven programs that creatively help connect people living with HIV with the stability they need to get healthy. “It’s also where I learned about Atlanta’s housing situation, the lack of affordable housing … and so much about the amazing community of people in Atlanta working in so many ways to make our community better.”

So why the interim?

“Actually, the board leaders and myself had a very serious discussion about why an interim. I recommended it strongly for two reasons. First, Rick Westbrook is such an admirable person and leader. He and his co-founders of Lost-n-Found Youth did something that very, very few people could do.”

She adds, “Anytime an organization has such a strong founder, an interim is a powerful way to follow that leadership. It tells everyone, “We are not simply moving on, but building on the good work which has been done.’”

“The other reason is that Lost-N-Found is working in an area where we want to grow and build sustainably, and to be honest, an interim has the opportunity to help put processes and procedures into place, to build up and honor the professional staff, and maybe make any needed tweaks — small ones — that help the organization grow.”

On her agenda first? Audrey wants to “meet with as many clients, board members, staff, and supporters as [she] can squeeze into [her] days.” She also wants to meet with other partners in her line of work and listen to the stories, passions, and opportunities that drive the community — especially if it calls for getting her hands dirty.

“Whether it’s cleaning the store, meeting with clients, reconciling bank statements, or pounding the pavement, I plan to do everything I can for the time being to fulfill the mission. No LGBTQ young person needs to be homeless and without options.” 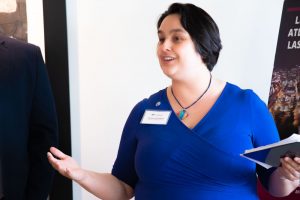 When asked about a dream project for which she’d like to partner up with another nonprofit, Audrey says she doesn’t want to single any organizations out. She does, however, have something in mind for Lost-n-Found, and that’s “working hand in hand with the housing, HIV, LGBTQ advocacy, workforce, education, and other human services organizations throughout the city, to truly connect young people to the resources they know they need.”

She strives to make the organization one that “can be trusted by anyone to do the right thing, and to provide that support in a way which honors the incredible resilience and strength in young people — especially young people who are excluded because of their sexual orientation, because of their gender identity, or their race, or a development question.”

I ask her if she feels the pressure yet.

“It’s my first executive director role — that should scare me, but I am surrounded by a very strong board of directors, and have been tremendously impressed with the staff I’ve met so far,” she responds. “So, pressure? Sure. But this mission matters so much … what better way could I use my life than to be useful to a great organization?” She admits, though, that she’ll miss her team at Living Room.

“Before working at Living Room, I worked for the United Methodist General Commission on Women, the denominational agency which supports women’s leadership initiatives and monitors the UMC for equity questions,” she says, after being asked if womanhood steers her focus or informs her in any way. “To be honest, I’m aware simultaneously of my cis-privilege and the ways in which unintentional and implicit gender bias make leadership a complex issue for every leader. I consider myself extremely lucky to have worked with some incredible people of all genders, who have helped me approach questions of sexism, gender, and transphobia with a gentle but firm approach.”

At home, she’s doing some surface-level housing projects, but when she actually gets a chance to relax, she loves to take walks while listening to audiobooks. “It’s a completely relaxing way to zone out.” She also loves cooking. “Feeding people is probably my most visceral joy in the world.” For the most part, you get the impression that relaxation isn’t what she wants to focus on — she’s already hard at work, making sure to be rid of any dust before it tries to settle around her.

“I’m a nerd, so I will be working to make Lost-n-Found not only great to clients, but one of the most transparent, trustworthy, clean-and-tidy-paperwork kind of nonprofits in the city. It’s already a great organization and we’re going to keep getting better.”