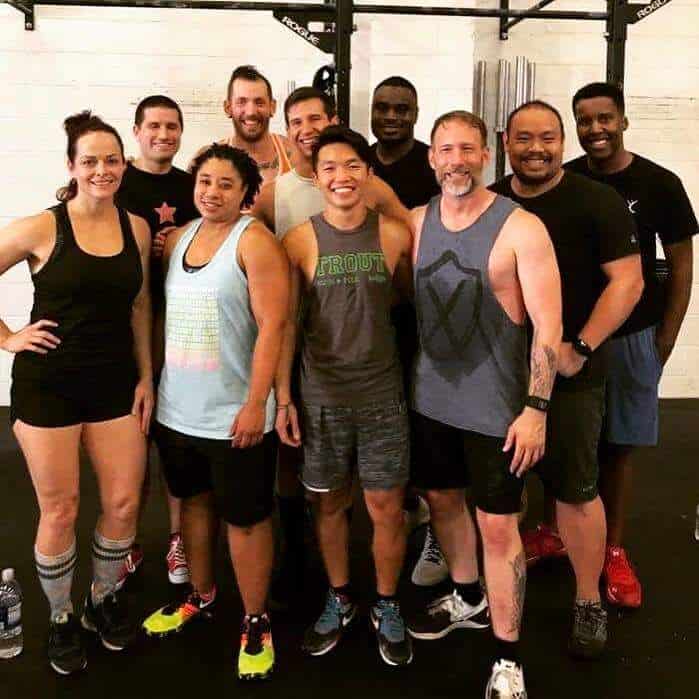 An LGBTQ powerlifting club has been formed to help teach our community to be strong.

The Fantastic Beasts LGBT Powerlifting Club was the idea of two Atlanta friends and lifting partners who realized that while there are a number of LGBTQ sporting clubs in the city, there was not a powerlifting one. Powerlifting is a strength sport that consists of three lifts: squat, bench, and deadlift.

So, David Holland and Reed Gilbert went about starting the powerlifting club last year. Reed says the goal of Fantastic Beasts is to not only teach all levels of powerlifting but to also “promote an atmosphere that is supportive to all lifters.”

As the two mulled over the idea of starting the club, David already had the perfect coach in mind — Lis Saunders, a strength coach and powerlifter, who just happened to be training him.

It was just the opportunity that Saunders, an LGBTQ ally, was looking for at this time in her career. She didn’t hesitate to lend her expertise.

David notes that while there are many paths to fitness, not everyone feels comfortable in gyms, and even those who are may get lost on what to do. For trans athletes, going to a gym may be even more difficult. This is where the Fantastic Beasts club that currently meets two times a month on Sunday at CrossFit Downtown Atlanta or AK CrossFit come in to play — to provide a welcoming place. Both have generously donated their spaces for training sessions and/or other activities.

“We wanted to offer an option for people whose primary aim is to get strong without worrying so much about aesthetics, and we wanted to do it in a group environment that is supportive of all the members regardless of sexual orientation, gender, or gender expression,” David says.

Reed, who has consistently worked out for about three years, has been powerlifting for about a year. For Reed, helping members of the Fantastic Beasts has done more than help him to get physically stronger but also helps with his overall wellbeing.

“Working with the FB allows me to get outside of my own problems and worries by helping people,” Reed says. “When I am at our lifting sessions, and I am helping someone with their lifts, I forget about all the silliness of my problems. Seeing the look on someone’s face after they nail a lift makes me forget about all my troubles and smile.”

Lis recalled that when she began powerlifting six year ago, it was a sport dominated by cisgender, heterosexual males. “I met a lot of people with very conservative beliefs which turned me off right away,” says Lis. “It’s important to me to introduce everyone I can to strength training, to make it more accessible and less intimidating, and to help people feel comfortable in the gym, whether or not they feel like a typical ‘athlete’ or ‘jock.’ I want to change the gym culture, and create more positive environments for people to learn good technique and reap the benefits of strength training.”

For Stan Fong, when he heard about the powerlifting group from friends, he jumped at the chance to join. Stan had done strength training in high school but prior to joining the Fantastic Beasts, his strength training consisted of lifting bears with hugs. “Working out with the FB has improved my technique and ability in lifting heavier weights,” Stan says.

For anyone who may be a little hesitant about strength training or trying out a session with the Fantastic Beasts, he adds, “There is an instant gratification in lifting heavy weight and everyone starts somewhere. The Fantastic Beasts are welcoming of anybody of any strength and skill level, and the sessions are a no-judgment zone.”

Reed agrees. “Along with facing social stigma and discrimination, people who identify as LGBTQIA also are at increased risk to experience depression, anxiety, and mental health instability, and I really think that [powerlifting] could help gay individuals build the strength they need to stand strong in the face of adversity,” Reed notes. “It is my hope that through teaching and promoting the sport of powerlifting among the LGBTQIA community I will be able to instill a new sense of strength and courage for future LGBTQIA individuals to push the envelope and never be afraid to be who they are and love who they love.”

As a coach, Lis says her primary goal is to teach safe lifting and good technique. But, she knows first-hand the benefits of strength training. “I struggle with depression and anxiety and for me, strength training has been a lifesaver,” she says. “It’s important to me to be a part of this community to give back to the sport and help more people enjoy getting stronger.”

The group participated in their first fundraiser Saturday, June 16.

Lis heard about the Women’s Strength Coalition, based in NYC, and the Pull for Pride events they held last year. She felt it would be the perfect event for the club. Atlanta was one of seven cities that hosted the event this year. So far, over $75,000 was raised nationwide to benefit homeless LGBTQ youth. The Atlanta event raised over $7,000.

“We’ll be fundraising through the end of June, and I hope we will end up raising between $8-10,000 for Lost-N-Found Youth,” Lis says.

For anyone who would like more information on the Fantastic Beasts, contact Saunders at teamlissmash@gmail.com or on instagram.com/teamlissmash.