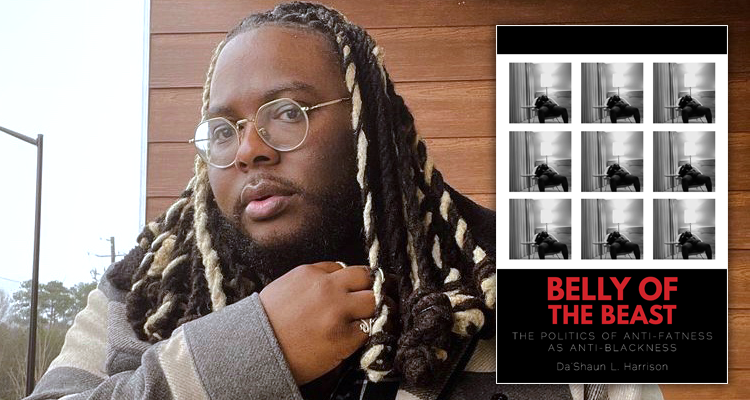 Da'Shaun Harrison, writer of "Belly of the Beast" / Photo via Instagram

“Belly of the Beast” Explores Intersections of Fatness, Blackness, and Queerness

In recent years, the body positivity movement has exploded in popularity. Championed mainly by fat women online, the movement aims to counteract anti-fatness in the mainstream by encouraging others to embrace and love their bodies regardless of size or shape. While the promotion of fat-inclusive self-love is obviously a positive thing, the realities of anti-fatness are nuanced and harmful in a way that self-love can’t fix, as local Black fat trans organizer Da’Shaun Harrison details in their book, “Belly of the Beast: The Politics of Anti-Fatness as Anti-Blackness.” In it, Harrison explores the racist history behind anti-fatness and how anti-fatness intersects with race and gender. While anti-fatness does manifest through fat-shaming, bullying, and discrimination via romantic, sexual, and platonic relationships, anti-fatness extends far beyond the interpersonal. As Harrison argues, anti-fatness is a systemic issue, inherently rooted in anti-Blackness, that threatens the very lives of those labeled “fat.”

One in three Americans falls under the category of obese, but this group is disproportionately made up of Black Americans; despite being only 13 percent of the American population, they make up 51 percent of America’s obese population. This is no coincidence, as the history of anti-fatness and the advent of body mass index (BMI) — the system behind the categorization of obesity — are deeply racist.

Prior to slavery in America, fatness was seen as a signifier of wealth and therefore status. This shifted, however, when race was constructed as a means of justifying slavery, to separate the “slave” from the “human,” as Harrison puts it.

“When Europeans saw Africans for the first time and saw that their bodies looked like them but their skin did not, it was then that anti-fatness was established as a coherent ideology,” they write. “… As the Slave represented capital and forced labor, fatness could no longer be about status and power, so it became about greed and ungodliness.”

BMI was then invented in the 1830s by Lambert Adolphe Jacques Quetelet. Quetelet, who was a mathematician, not a physician, sought to chart the average body type on a bell curve graph. Not only are there many physiological issues with the BMI formula he produced from the data he collected — for instance, there is no allowance for the relative proportions of bone, muscle, and fat — Quetelet placed arbitrary value judgments on the data, labeling the top of the bell curve, which is what’s average or typical, as the “ideal.” Furthermore, he collected data primarily from French and Scottish men, thus making the “ideal” body that of the average white man.

BMI is still used in the medical field today and has serious consequences for those deemed “overweight” or “obese.” In a study examining how the weight of a patient affects physician attitudes and prescribed treatments, doctors reported that seeing patients who were heavier was a greater waste of time, that they would like their jobs less as their patients increased in size, and that they felt less patience the heavier the patient was. Further research shows that doctors may also spend less time with obese patients or fail to refer them for diagnostic tests with the insistence that whatever is wrong with them can be cured by losing weight.

Anti-fatness doesn’t only threaten lives medically; as Harrison points out, when fatness is combined with Blackness in masculine-presenting individuals, it can be used as justification for murder. Eric Garner, Mike Brown, Tamir Rice, Walter Scott, Samuel DuBose, Alton Sterling, and George Floyd were all Black men killed by police. In the aftermath of their murders, each of their bodies was used as justification for why they died; either their preexisting conditions like diabetes or asthma were to blame for their deaths or their large stature was to blame for why the officers felt threatened and forced to defend themselves.

Anti-fatness doesn’t only manifest in extremes. It permeates everyday life.

“Statistics show us that fat people are less likely to be hired for a job,” Harrison writes, “that fat people in America can legally be fired from a job in forty-nine states for being fat, that fat people are more likely to be homeless, [and] that fat women are more likely to be sexually assaulted.” For transgender and nonbinary people, anti-fatness can also exacerbate gender dysphoria. According to Bearboi, a transmasculine person Harrison interviewed for their book, top surgery can cost almost twice as much for bigger people. Jupiter, another nonbinary trans person Harrison interviewed, said it’s also difficult to find binders that work for fat bodies.

The reality of anti-fatness is one that is as systemically interwoven into our society as racism, sexism, and classism and relies on each to survive. Because of this, as Harrison concludes, even the most radical self-love won’t save fat people from the systemic oppression they face — only radical change to or eradication of systems like health care, policing, and housing can.

“Belly of the Beast” cements itself as an apt and necessary piece of cultural criticism that poignantly and concisely deconstructs anti-fatness and requires readers to rethink their own biases and assumptions of how the world is meant to work. You can purchase “Belly of the Beast” at Charis Books in person or online at charisbooksandmore.com.