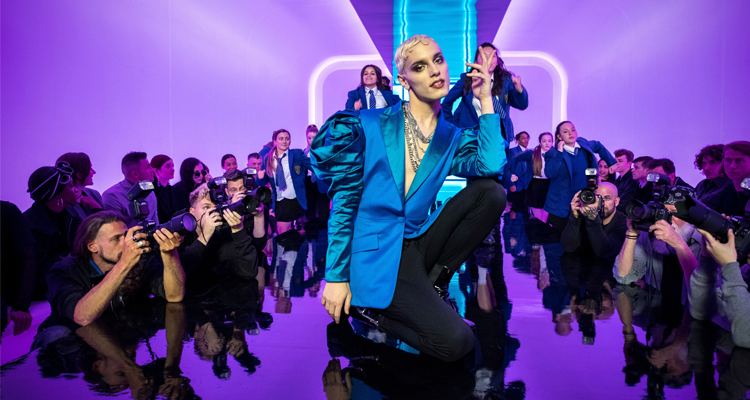 Jim Farmer
Culture
September 10, 2021
Like most 16-year-olds, Jamie New has dreams. His are a little different from his classmates’, however; he fantasizes about becoming a drag queen.
The new film, “Everybody’s Talking About Jamie,” opening September 10 in Atlanta, is based on the celebrated stage musical of the same name with music by Dan Gillespie Sells and book and lyrics by Tom MacRae. It stars Max Harwood as the titular character. Harwood, Lauren Patel (who stars as Jamie’s best friend Pritti Pasha) and director Jonathan Butterell recently visited Atlanta for a screening of the film and a press day.
Butterell, who — like Harwood — is out, originated the 2017 stage musical inspired by the 2011 television documentary “Jamie: Drag Queen at 16.” The director watched the documentary and it changed his life. “I watched this 16-year-old working class kid from a community I knew well say, ‘I want to be a drag queen,’” he recalled. “I watched the support of his mother and how his community shifted and allowed a safe space. I felt I needed to tell this story, and I felt I needed to tell this as a musical. I needed to take it to my home in Sheffield.”
Harwood watched the musical a year before he auditioned and knew and loved the music, so when the opportunity came to audition, he was ready to go. In many ways the actor related to Jamie.
“I grew up not as openly gay, I did not come out until I was about 18, but definitely my head was out of the classroom,” said Harwood. “I was always creative, always wanted to be the star of my own movie.”
Patel was the opposite of Jamie in high school — studious, keeping to herself, and stressing about exams. Harwood jokes that Jamie and Pritti are like chalk and cheese, balancing each other out. “Jamie probably has more strategy and ideas of how he can do things and Pritti is more logical,” said Patel. “They could both use a little more of each other’s sensibility.”
Growing up in a working-class community as a gay kid, Butterell didn’t have the opportunities Jamie did. “I was a queer kid, quite feminine, and I needed to find a way of expressing myself,” he said. “I had supportive and had loving parents, but I felt like I could not have done [what Jamie does] in school. I did not have any aspirations to be a drag queen. I just wanted to be out there telling stories.”
“Everybody’s Talking About Jamie” was originally set for release last October, but was delayed because of COVID-19 before being sold by Disney to Amazon.
It was vital for the director to have an openly queer and effeminate kid at the center of the story. “Very often that character is not portrayed as the hero of the story; they are often portrayed as the sideline comic character,” Butterell said. “They are the comic relief, or they are the victim. I did not want to do either. I wanted to make sure that the character was not a victim and it wasn’t a coming out story. There are some wonderful coming out stories, but I wanted to tell the story of any young person taking their place in the world.”
The director saw very little positive representation when he was growing up, but he is happy to see that has changed over the years.
In the film Jamie meets Hugo Battersby, a former drag performer (played beautifully by Richard E. Grant) who provides him with guidance. Butterell wanted to pay homage to drag queens from another era who risked their lives and did so away from today’s accepting society, one where drag is mainstream. “From Stonewall onwards and before that, I wanted to make sure that story was told,” he said. “I was a young person during that time in the ’80s where there was a law called Section 28, which criminalized the promotion of homosexuality. We had to get on the street to march to say we are valid a part of this society and we had to get out with placards. Drag queens were there and there was such a diversity. I wanted to make sure that story was told too.”
“Everybody’s Talking About Jamie” opens September 10 at the Plaza Atlanta and then streams on Amazon Prime September 17.