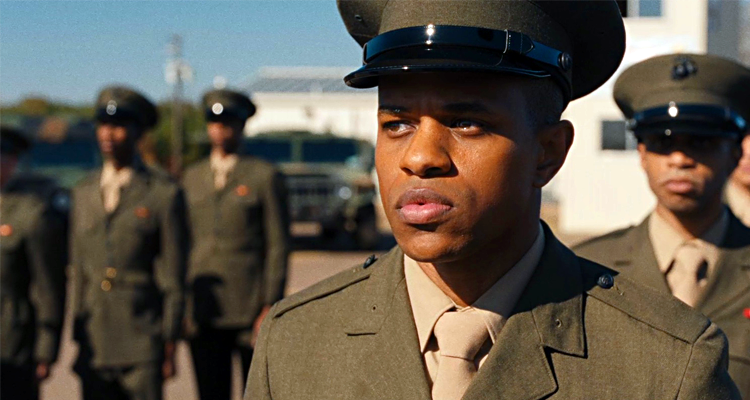 For Elegance Bratton, the writer and director of the new film, “The Inspection,” his newest project is intensely personal. The story of a young gay Black man who decides to join the Marines is, he says, 100 percent autobiographical when it comes to the hopes, fears, and desires of the lead character — even if the situation he finds himself in is not — but the moments between him and his mother are directly ripped from Bratton’s own life. Bratton served in the Marines from 2005 to 2010.

Jeremy Pope plays Ellis, who is nearing the end of a really brutal five-year experience with homelessness.

“He is an out gay man, and he has found community with the Black, queer community, but ultimately he is at a point of no return,” Bratton said. “Many of his friends have met untimely deaths. Ellis is like any other gay Black man. One of out every two will be HIV positive in our lifetime. We are eight times more likely to commit suicide and be homeless. Those statistics are real life for him, and ultimately, he doesn’t want to be that statistic. He wants some dignity and honor.”

Ellis joins the Marines to win back the love of his religious mother (Gabrielle Union). He blames himself for many of the odds that are stacked against him, but eventually, he learns how to respect and love himself.

While in service, Ellis meets drill instructor Rosales (Raul Castillo), who is an immigrant. Rosales can identify with Ellis in having to find a way to assimilate into culture.

“Rosales discovers he is a nurturer,” Bratton said. “These are two men who are learning the contours of male intimacy from two very different locations.”

The scenes between Ellis and his mother were quite intense for Bratton. His own mother was murdered a few days after the film was greenlit.

“I have to say I am grateful to Gabrielle for bringing my mother back to life,” he said. “She gave me a form of closure my mother did not have time to figure out how to give me.”

He cried between takes, because a conversation depicted in the film was the last one he ever had with his mother.

It was important for Bratton to cast an out gay man in the lead role, and Pope delivers one of the best performances of his career here.

Bratton, whose 2019 “Pier Kids” was a huge breakthrough documentary, wrote the first draft of “The Inspection” in 2017 and credits his husband (and the film’s producer) Chester Algernal Gordon, producer Effie Brown and distributor A24 for helping him along the journey.

A night out for a couple changes their lives forever and awakens their sexual identity in the new film “Please Baby Please.” Directed by Amanda Kramer, it’s a stylish, highly theatrical film, now in cinemas and coming soon on VOD.

The characters of Suze (Andrea Riseborough) and Arthur (Harry Melling) are a youngish bohemian couple who have been married a while and are child free, living in New York.

“They are at a crossroads because they are realizing there is something odd going on in their marriage,” Kramer said. “It could potentially be a sexual awakening in Arthur or a gender awakening in Suze. They are feeling it at the same time and are attempting to get through the muck in an era where people were not thinking of that and just living their lives, suppressing everything. This is about the cracks in the façade of that.”

According to Kramer, the film is about coming to accept yourself and express yourself in a way that you do not feel shame.

“The most important thing for both [Suze and Arthur] is to get past shame and explore what it could look like to follow certain desires,” she said. “They both represent for each other a lot of mutual understanding and a lot of go-find-what-you’re missing and let’s meet back here and discuss. They love each other.”

“Everything you see in the movie is everything I love,” Kramer said. “It’s a love letter, an ode to films of a certain era, to photographers, to fetish, to a community I have always looked up to, to be honest, and a song in your heart.”

“Please Baby Please” is now playing at the Plaza Atlanta