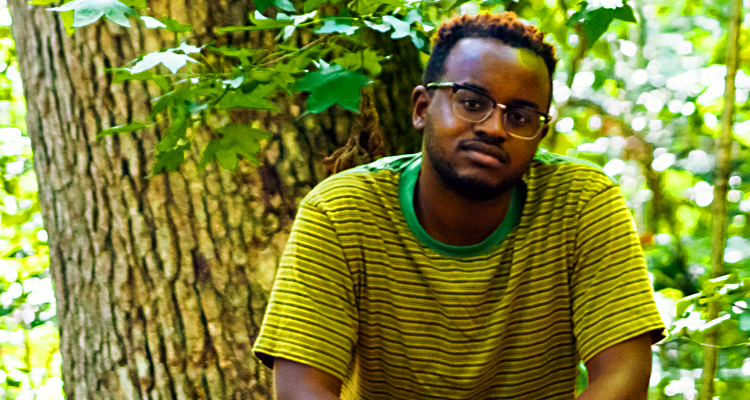 Jay Americana (he/they) is an Atlanta-based rapper and recording artist originally from Valdosta. He started writing song lyrics when he was 13 years old, but didn’t begin to take it more seriously until high school, with the release of his first project at 19 years old. Topically, their music recounts hyper-stylized personal events that have happened in their life. Some influences that you may be able to hear in their music are Stevie Wonder, Missy Elliot and Radiohead, along with fellow Black queer artists like Frank Ocean, Kevin Abstract and Lil Nas X.

“If you had told me years ago that I would be able to hear these songs [from queer artists like Kevin Abstract and Lil Nas X] on the radio, I wouldn’t believe you,” Americana told Georgia Voice. “The fact that people across generations can connect with [Lil Nas X,] this gay Black boy from Atlanta … is very inspiring.”

Americana’s older music could be described as somber, pensive, and dramatic, but their music as a whole is “genre bending pop, rap, indie, dance, whatever I feel like.” Basically, if their music were a meal, they said it would be a fusion dish like a Korean street taco, something that wouldn’t make sense on paper, but with the right execution, blends different kinds of flavors seamlessly. For Americana, music serves as a different language to communicate to people with —hence, why the feelings of connection and relatability are what he wants to portray through his music.

“As a queer person who grew up in south Georgia, I’m very used to being an outsider of sorts, so I kind of take that approach to my music as well,” they said. “It doesn’t fit neatly into any kind of normative box and I relate to that personally. I think being able to embrace that weirdness, or that queerness, in music is so important. And I think, especially now, it’s a lot easier as a queer artist to be openly expressive and not have to hide behind gender neutral language or anything like that. Because the people who are gonna connect with it, are gonna connect with it.”

Americana approaches each project as if it’s its own self-contained cinematic universe. Filmmakers such as Jordan Peele, Dario Argento and Wes Craven inspire the gaudy, extravagant, campy horror vibe that Americana likes the visuals for their music to exemplify. Some frequent collaborators — what he calls the “Justice League” of his music — are Bickle (@heybickle), Connor Jones (@probablyconnorjones) at Pendulum Studios, and Ezra (@epnds).

They have been working on a new album titled “555” (the time they were born) and plan to release it on their birthday, Halloween. As an angel number, 555 signifies moving forward and entering a new phase in life, which is extremely fitting for the context of this album. They described it as a bit of a diversion from earlier projects. It will be less somber and more of a “positive vibration” dance record with influences from house, garage, and drum and bass. Revisiting these genres as a queer person felt like going home to Americana.

This shift can be compared to the shift from FKA Twigs’ album, “Magdalene,” a manifestation of her breakup, to “Caprisongs,” which serves as a rebirth of Twigs’ confidence and overall happiness. Americana said Caprisongs was one of his inspirations for his upcoming album due to both the content and the tonal change in Twigs’ music.

Americana dealt with emotional issues in their past that forced them to take a step back from making music, but after going to therapy, he found emotional liberation and decided that constant suffering wasn’t necessary to make great art. This shift in philosophy is sure to be reflected in his upcoming record, where he will show us how displays of joy can be just as impactful as displays of despair.

To other queer artists looking to make music, Americana says to just go for it.

“Get together with your friends and make a couple songs,” he said. “They might suck at first, but you’re gonna get there. And most importantly, stay true to yourself. Don’t feel like you have to catch up with anyone else … remember, they’re looking at you for inspiration, not the other way around.”