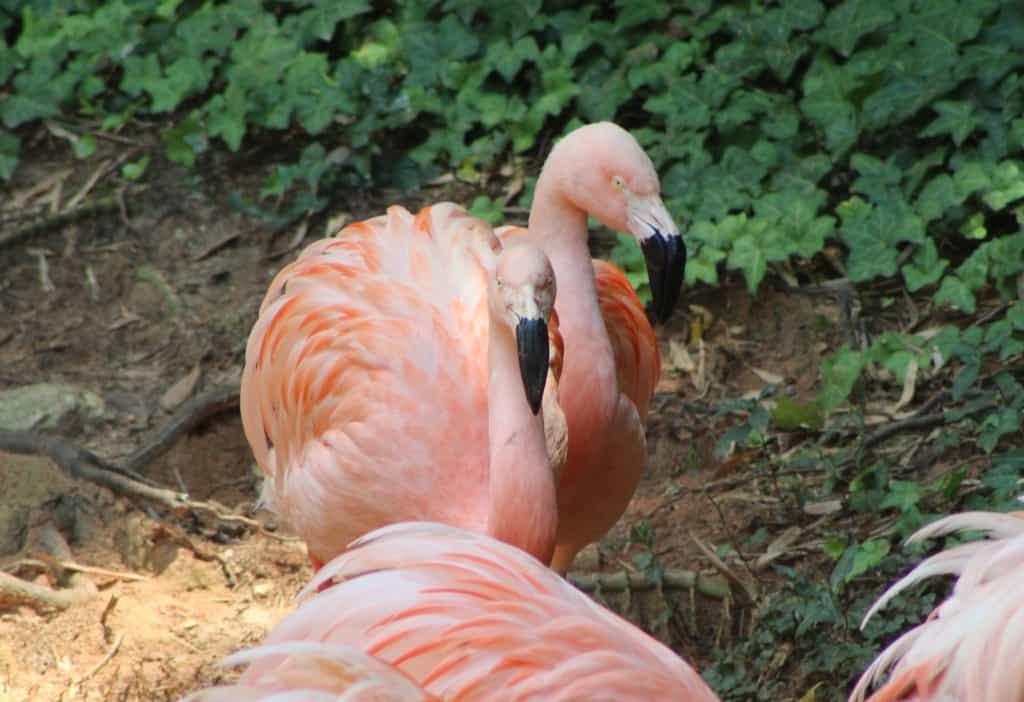 You wouldn’t immediately notice anything different about the 57 different flamingos who call Zoo Atlanta home. They all have similar coloring and they participate in similar habits and rituals. But 15 years ago, bird keepers witnessed something a little unusual about two of the flamingos. They appeared to have paired up, which isn’t that odd considering the typical mating habits of the species.

No, what stood out was that the two were males.

Bird keepers estimate that the two, officially known as 20 and 46 since the flamingos aren’t given standard names, have been together since the early 1990s but that the zoo didn’t start keeping track of it until 2001. That means the pair, who were both born in the mid-1980s, recently celebrated their silver anniversary together.

What stood out even more about them is what they did around that same time—started a family together.

Other than being the same sex, 20 and 46 are like any other flamingo couple at Zoo Atlanta. They’re together constantly, following each other around, eating together, protecting each other. On one recent day, they really almost did everything according to Zoo Atlanta bird keeper Monica Halpin.

“We did see them yesterday kind of doing the pre-copulation thing,” Halpin told Georgia Voice on a recent visit to the zoo. “We didn’t actually see them try and copulate, but yeah they’ll do everything together.”

Experts give varying numbers when it comes to the prevalence of same-sex attraction in animals. The Oslo Natural History Museum in Norway put on an exhibition on the topic in 2006, saying that same-sex attraction had been observed among 1,500 species but that it had been well documented in closer to 500. Zoo Atlanta’s Halpin says the behavior is much more common in large social flock species like penguins, albatross and, yes, flamingos.

And 20, 46 and other gay animals across the world like them are actually playing a role in the larger conversation about LGBT rights. In the landmark 2003 U.S. Supreme Court case Lawrence v. Texas, the American Psychiatric Association and other groups filed a friend-of-the-court brief that cited Canadian biologist Bruce Bagemihl’s book “Biological Exuberance: Animal Homosexuality and Natural Diversity.” This was the case that led to the striking down of sodomy laws in 14 states (including Georgia), therefore making same-sex sexual activity legal in every U.S. state and territory. Bagemihl’s book was also cited in 2000 by LGBT rights groups opposed to Ballot Measure 9, a proposed Oregon statute that prohibited teaching about homosexuality or bisexuality in public schools. The measure failed.

Things get a little dramatic at Zoo Atlanta’s flamingo exhibit when it comes to parenting. Halpin says it’s never 100 percent clear who the biological parents of each chick are because you never actually see the female lay an egg.

“It’s such a soap opera up there with so much constant swapping and fighting that you never know,” she explains.

What they do know is that last year, 20 and 46 got in on the action. After either stealing a nest or an egg, one would sit tight on it while the other defended his mate and the egg from others. It soon became time for the bird keepers to pick the pairs that would raise the chicks. Halpin says sexual orientation never came into the equation.

“I just picked the three [pairs] that I thought showed the best potential for being parents and [the male pair] just happened to be one of them,” she says. “They sat really tight on their egg so I gave them a chick and they raised it.”

Number 50, as their chick is known, is now one year old and, as is usual when the species reach that age, he’s broken off from his two dads to be on his own. Halpin is unequivocal when asked how 20 and 46 did raising 50.

“They were the best parents we had last year,” she says.

And the couple may have some like-minded friends in the flock. Just last week, the bird keepers started noticing a one-year-old and two-year-old male chick (not the chick that came from 20 and 46) spending a lot of time together, following each other around and even sitting on a nest.

“It’s really rare to see chicks that age up there. They’re usually about five or six before they start breeding and these chicks are one and two,” Halpin says. “Then especially to be up at the nest site at all and having one sitting. They didn’t stay on the nest but I’m keeping an eye on them. They’re pretty cute.”