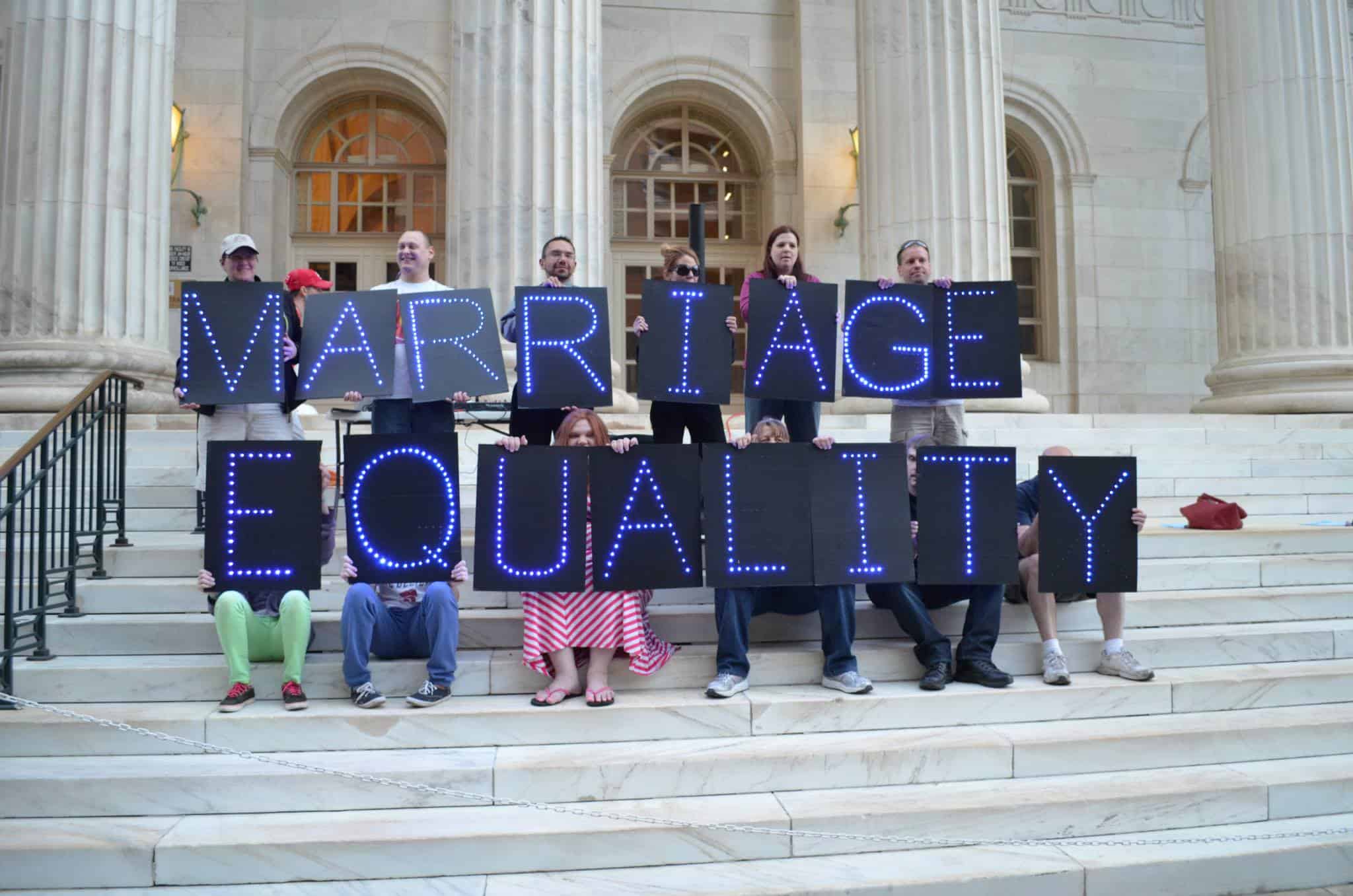 Saying that it “emphatically agrees” with numerous court decisions in the past year that have struck down bans on same-sex couples marrying, a three-judge panel of the Tenth Circuit U.S. Court of Appeals voted 2 to 1 Wednesday to uphold a lower court decision striking down Utah’s ban Wednesday as unconstitutional.

The majority said “it is wholly illogical to believe that state recognition of the love and commitment between same-sex couples will alter the most intimate and personal decisions of opposite-sex couples.”

The decision came in Herbert v. Kitchen included an immediate stay of its enforcement pending the state’s anticipated appeal to the full circuit bench.

It is the first ruling from a federal appeals court and, thus, is the closest to being appealed to the U.S. Supreme Court, where most legal observers expect the validity of statewide bans against marriage licenses for same-sex couples will be decided in about a year.

Utah officials announced they will appeal the decision to the U.S. Supreme Court.

But Lambda Legal’s national legal director Jon Davidson notes that, while Kitchen is likely to be the first same-sex marriage ban case to be filed with the Supreme Court post-Windsor, “the Court does not have to take the first case to reach it.”

“By the time the Court decides whether or not to accept review in Kitchen, it may well also have a petition from a decision” in the Fourth, Sixth, and Ninth circuits. The Fourth Circuit case, led by Ted Olson and David Boies with the American Foundation for Equal Rights, was argued shortly after the Kitchen appeals case was argued. The Sixth Circuit will hear arguments in five cases, including one from Lambda, in August. And the Ninth Circuit will hear arguments in three cases in September.

“I would not be concerned if it were the Kitchen case that is the case the Supreme Court hears,” said Davidson. “It has been well-briefed and argued, with excellent lawyering by Peggy Tomsic, her firm (Magleby & Greenwood), and NCLR.

“What struck me immediately upon reading the opinion was the Tenth Circuit’s decision to avoid dealing with the question whether sexual orientation discrimination requires heightened scrutiny,” said New York Law School Professor Arthur Leonard, editor of Lesbian/Gay Law Notes. “They avoided it entirely by treating this as a fundamental rights case. Fundamental rights cases always get strict scrutiny, whether they arise in a pure due process context or whether they involve an equal protection claim.”

“The Tenth Circuit applied strict scrutiny based on the first two grounds (fundamental right to marry, and unequal denial to same-sex couples of access to that fundamental right). It did not address whether sexual orientation is a suspect classification or whether such discrimination is otherwise entitled to heightened judicial scrutiny,” he said.

Roberta Kaplan, who was Edith Windsor’s primary counsel in the Windsor DOMA challenge, said she was “not at all surprised by the results.”

“I said last summer at an HRC dinner, that Windsor was the functional equivalent of the Battle of Normandy,” said Kaplan, referring to the pivotal battle in which Allied forces fought their way onto the European continent to begin the effort to win back territory seized by the Germans in World War II. “It was, for a whole bunch of reasons. I just didn’t think we’d get through the rest of Europe so quickly.”

Judge Paul Kelly (an appointee of President George H.W. Bush) concurred on a procedural matter (legal standing) but dissented on the key issue. Kelly is the panel’s most conservative member.

The majority opinion
Judge Carlos Lucero wrote the majority’s 65-page opinion. Not surprisingly, he referred frequently to the U.S. Supreme Court’s decision last June to strike a key section of the Defense of Marriage Act (DOMA) in U.S. v. Windsor.

“…The drafters of the Fifth and Fourteenth Amendments ‘knew times can blind us to certain truths and later generations can see that laws once thought necessary and proper in fact serve only to oppress,” wrote Lucero. “As the Constitution endures, persons in every generation can invoke its principles in their own search for greater freedom.’

“…A generation ago, recognition of the fundamental right to marry as applying to persons of the same sex might have been unimaginable. A generation ago, the declaration by gay and lesbian couples of what may have been in their hearts would have had to remain unspoken. Not until contemporary times have laws stigmatizing or even criminalizing gay men and women been felled, allowing their relationships to surface to an open society. As the district court [opinion in Kitchen] eloquently explained, ‘it is not the Constitution that has changed, but the knowledge of what it means to be gay or lesbian.’ Consistent with our constitutional tradition of recognizing the liberty of those previously excluded, we conclude that plaintiffs possess a fundamental right to marry and to have their marriages recognized.”

The majority opinion made frequent references to the impact of the Supreme Court’s decision in Windsor, striking DOMA. For instance, noting that Utah had argued that its laws banning same-sex couples from marrying “merely define marriage within its borders,” the majority said Windsor demonstrated that a provision of a law labeled a “definition” is not immune from constitutional scrutiny.

The majority referenced many other Supreme Court decisions, too, including the 1996 landmark decision in U.S. v. Virginia where the court said it was a violation of equal protection rights to deny women the ability to attend Virginia Military Institute.

“Whether a state has good reason to exclude individuals from the marital relationship based on a specific characteristic certainly comes into play in determining if the classification survives the appropriate level of scrutiny,” wrote Lucero. “…A prime part of the history of our Constitution . . . is the story of the extension of constitutional rights and protections to people once ignored or excluded.”

The majority also cited Bowers v. Hardwick, the 1986 decision that upheld state laws banning intimate relations between consensual same-sex adults and its 2003 decision in Lawrence v. Texas, which said such bans were unconstitutional.

“The Court’s rejection [in Lawrence] of the manner in which Bowers described the liberty interest involved is applicable to the framing of the issue before us,” wrote Lucero. “There was clearly no history of a protected right to ‘homosexual sodomy,’ just as there is no lengthy tradition of same-sex marriage.

“The majority characterized Utah’s proffered reasons for banning same-sex couples from marrying as relying on “a sleight of hand in which same-sex marriage is used as a proxy for a different characteristic shared by both same-sex and some opposite-sex couples,” Lucero added.

“Same-sex marriage must be banned, appellants argue, because same-sex couples are not naturally procreative,” noted Lucero. “But the state permits many other types of non-procreative couples to wed.”

“Only same-sex couples, [Utah officials] claim, need to be excluded to further the state’s interest in communicating the link between unassisted biological procreation and marriage. As between non-procreative opposite-sex couples and same-sex couples, we can discern no meaningful distinction with respect to [Utah officials’] interest in fostering biological reproduction within marriages. The Equal Protection Clause ‘is essentially a direction that all persons similarly situated should be treated alike.’ Extending the benefits and protections of a civil society to some but not all similarly situated families violates this critical guarantee.”

A historic dissent weighs in
In writing a 21-page dissent to the majority opinion, Judge Paul Kelly earned the distinction of becoming the first federal judge post-Windsor to say that a state ban on same-sex couples marrying is constitutionally sound.

Kelly said he would not analyze Utah’s ban as impinging on a fundamental right to marry because “for centuries, ‘marriage’ has been universally understood to require two persons of opposite gender.”

He said he would scrutinize Utah’s ban with simple rational basis. On that basis, he said, he would accept the law as “rationally related to (1) responsible procreation, (20) effective parenting, and (3) the desire to proceed cautiously in this evolving area.”

While the Supreme Court has recognized a fundamental right to marriage, wrote Kelly, “every decision vindicating that right has involved two persons of the opposite gender.”

Kelly said that “requiring every state to recognize same-gender unions—contrary to the views of its electorate and representatives—turns the notion of a limited national government on its head.”