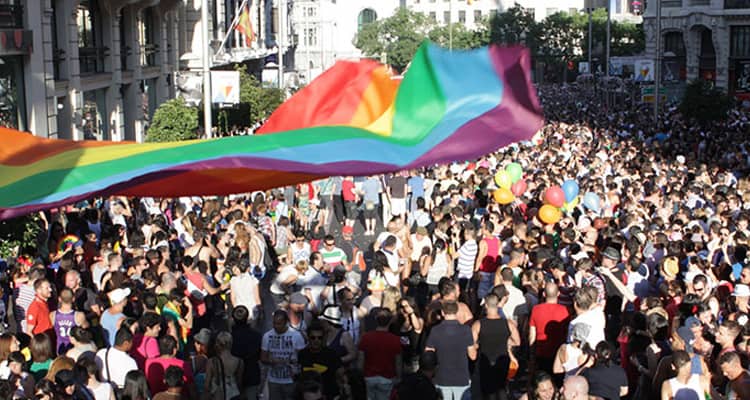 For many of us, celebrating pride in our hometown or nearby metropolitan city can be the best experience of all, but don’t sleep on traveling abroad to show your pride! Some of the most iconic pride festivals happen across the pond in Europe and down under in Australia! It may take a year of planning through booking flights, hotels and itineraries, but trust us, it’s worth every penny! Here are our top picks for international pride festivals!

Noted as the second largest pride celebrations in the world, Madrid brings in an estimated 3.5 million visitors to celebrate the city’s 42nd anniversary. It’s also known as Orgullo Gay de Madrid and is hosted in the Chueca neighborhood in the center of Madrid. 2017 was the first time Madrid celebrated world pride and the continent-wide EuroPride to celebrate its 40th birthday.

The German pride celebration brings in an estimated 700,000 visitors from around the world! While it’s not as large as other pride celebrations, it’s one of the most famous festivals in Europe taking place since 1979. The start day of Berlin Pride in Germany is known as Christopher Street day. Expect live performers, DJ’s, and to celebrate the 50th anniversary of the Stonewall Riots, the Soul of Stonewall Award ceremony will be presented on the main stage of the Pride Village! There’s a large leather community in Berlin which makes this city a perfect for the international Folsom Europe event happening at the beginning of September.

While these pride festival is quickly creeping up and plans to attend may have already passed, this pride celebration in Israel is one to plan for even years in advance! It’s one of the smaller pride celebrations in the world, bringing in about 250,000 visitors, but the location is a big draw! Located on the Mediterranean sea, it’s the biggest pride in the middle east! Tel Aviv has become a refuge for LGBTQ locals and travelers in the region and the city is proud to stand by its diversity. And if you’re looking for some of the hottest men on the planet, Tel Aviv won’t disappoint! There are dozens of parties with some of the top DJs in the world, with chiseled bodies and little clothing!

A quick plane ride or even road trip drive away, Toronto Pride is a popular destination for many LGBTQ Americans with more than a million visitors during the city’s pride celebrations. The festival started in 1981, and since then, has engulfed the city’s gay village comprising much of Church street where bars, clubs, and stores all partake in the pride festivities!

The city will also celebrate the fourth annual Pride month, starting on June 1, with a flag raising ceremony taking place in the city hall. Events throughout the weekend include an exclusive family pride program, Trans pride, the Dyke March and the famous Pride parade which has included Prime Minister Justin Trudeau! If you’re looking to enjoy a little circuit party fun during the weekend, Toronto throws the PRISM Festival with DJs from the US and around the world!

Also known as Marche Des Fiertes, the weekend brings in more than 800,000 visitors to the city. The city’s gayborhood, La Marais, is home to a handful of gay bars with dance parties and special events happening all weekend long. The march will kick off from the Luxembourg Metro and finish at Place de la Republique in central Paris. Aside from its pride celebration, Paris is one of the most romantic cities in the world which makes it a prime spot for couples to celebrate love and pride all in one! If you’re ready to take on Paris nightlife and dance into the early morning hours, Big Paris Pride has you covered with circuit parties full of beautiful French men!

This pride celebration is talked about many years after they attend because it’s just that magical! The pride festival continues to grow with over 500,000 visitors every year. Street parties are not to be missed and the famous Canal Parade through the historic Amsterdam Unesco canals on Saturday is the highlight of the week! Unlike the typical street parade, boats replace car floats and water replaces throwing beads and candy! And if you’re looking to get hot and sweaty at night, there’s no shortage of dance parties and all-male saunas to help you meet and mingle with men from around the world!

It remains the largest pride festival in the whole Scandinavia since 1998 which makes it a must-go-to destination for LGBTQ travelers during pride season! Pride House is the festivals cultural center where you can be part of seminars, debates, workshops, and exhibitions, or enjoy film screenings and plays. This year, Stockholm along with Gothenburg will jointly host the EuroPride event which will make this pride celebration even more packed with visitors from around Europe and the world!

You’ll have plenty of time to prepare for this Pride event and for a good reason! After the country’s legislature approved the first same-sex marriage law earlier this month, it’s safe to say this year’s pride celebration will be one that many across the continent of Asia will never forget! It’s Asia’s largest pride celebrations with about 130,000 visitors to the city, but expect that number to rise significantly! Didn’t know that Taipei was gay-friendly? The city’s liberal-minded Taiwanese capital has a thriving gay scene with it’s Red House district home to more than 25 different gay bars, shops, and restaurants. Kaidagelan Boulevard in Taipei is dubbed “the San Francisco of the East,” which will draw anyone in the LGBTQ community to the bustling Asian city!