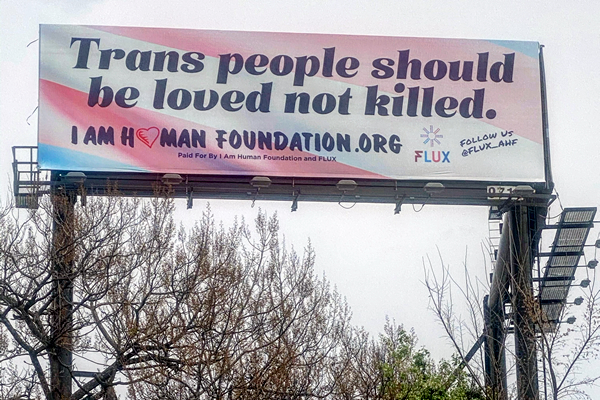 An Atlanta organization dedicated to ending violence against the Black transgender community expanded its billboard campaign along Interstate 75 last week.

The I Am Human Foundation first unveiled the campaign in January which featured supportive phrases such as “Black trans lives matter.” The latest billboards, the seventh in the series, among other things simply state, “Stop killing Black trans women” and “Trans people should be loved not killed.”

“It’s just as simple as that,” said Alex Santiago, the foundation’s executive director.

Santiago told the Washington Blade on March 26 that the purpose of the ongoing billboard series is to make the public as uncomfortable and upset as he felt when he learned of Bianca “Muffin” Bankz’s murder.

Bankz, a Black trans woman, was shot to death in Atlanta on Jan. 17. Santiago learned of the loss on the Human Rights Campaign’s website.

“I knew nothing about it and that scared me,” he said. “We’re called the gay capital of the world and there was no news, no out cry, no anything. That pushed me to get the ball rolling.”

The Transgender Ally Collective in 2020 placed a message on a billboard along Houston’s Interstate 10 that called for the protection of Black trans women. Spectrum South, a Texas-based online queer magazine, reported the move came at a time when Black trans women in the state were “being murdered at alarming rates.”

“I think activists in Texas are doing a good job,” Santiago said. “Monica Roberts was amazing and was definitely a role model.”

Roberts, a Houston-born trans rights advocate who died last year, was known for her groundbreaking coverage of transgender murder victims.

Santiago said one thing he would ask Roberts if she were still alive is “I have their attention, what do I do now?” As he spoke he realized he was already accomplishing one goal with the numerous billboards, he was making people uncomfortable, particularly in Atlanta Mayor Keisha Lance Bottom’s office.

After the first series went up, the mayor’s director of LGBTQ affairs reached out to him to find out what they could do to support his work.

Santiago also hopes the billboards can help save lives.

“If those billboards can touch one person, can save one life, then I feel we’ve done our job,” he said. “And we’re going nationwide. These billboards will be everywhere before I’m done.”