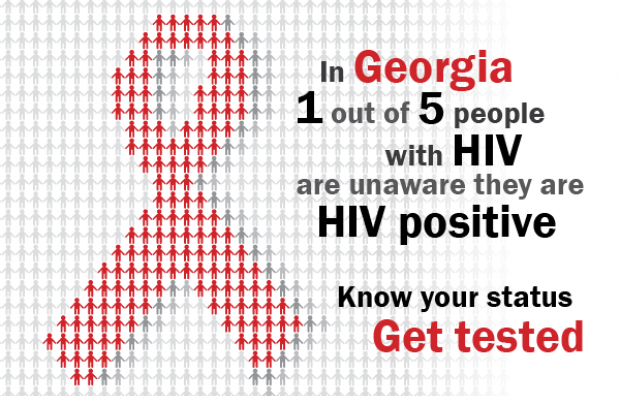 A recent study by the Centers for Disease Control and Prevention shows that Georgia is lagging behind other states when it comes to linking those with HIV to care and retention in care but ranking among the highest for death rates for those with AIDS.

The CDC’s 2014 State HIV Prevention Progress Report looks at each state’s successes and failures in the area of HIV prevention. Released in September, the report paints an abysmal portrait of how Georgia is doing to help those with HIV as well as lowering numbers of new infections.

“The nation’s Ryan White system of HIV care for the uninsured is stretched thin. Patients have lots of hoops to jump through,” said Greg Bautista, an HIV/AIDS community activist. “They can make dozens of trips in one year if their medical exams, quarterly labs, case manager appointments, eligibility, and monthly medication pickups are not in sync. They can get fatigued and drop out.”

And these hoops and traversing a complicated health care system contribute to Georgia’s poor ranking by the CDC, Bautista said.

“It’s sad and alarming, especially to see the death rate for Georgians with HIV is one of the highest in the country,” he said.

The Ryan White HIV/AIDS Program was funded at $2.32 billion for fiscal year 2014. The majority of funds go to support primary medical care for those with no medical insurance. In 2013, Georgia received just under $96 million in Ryan White funding.

Combating the stigma surrounding HIV/ AIDS is a priority for the Department of Public Health when it comes to working to prevent the spread of HIV in Georgia, according to a spokesperson.

“Since becoming a standalone, cabinet- level agency in 2011, and before, we at the Georgia Department of Public Health have been exploring ways to reduce the burden of HIV and AIDS in our state and connect more people with care,” said DPH spokesperson Ryan Deal. “Addressing the stigma associated with HIV and AIDS is the center of our work as stigma alone often prevents individuals from being tested or seeking treatment.”

And a new initiative, dubbed the CAPUS (Care and Prevention in the United States) Care Portal, is underway to try to ensure people with HIV are connected to care as soon as possible, Deal added. The CAPUS project is a three-year cross-agency project led by the

CDC that aims to reduce HIV/AIDS morbidity and mortality among racial and ethnic minorities in the United States.

“Finding sustainable HIV treatment and care is the single, most important connection HIV positive individuals can make. But for many, navigating through different and confusing systems can become so frustrating that a connection to care is never made. Instead, everyday challenges like housing and employment become life’s priority,” he said. “Georgia’s CAPUS Care Portal is positioned to change the landscape of HIV and AIDS care, and knowledge, in Georgia.”

Georgia was one of the eight states to receive CAPUS funding, which directly aligns with the National HIV/AIDS Strategy. The program launched in October.

“The online portal will serve as Georgia’s clearinghouse for HIV/AIDS information and, for the first time, will allow users to securely and privately determine their pre-eligibility for Ryan White services by answering a few simple questions,” he explained.

If eligible, the user’s connection to care begins almost immediately, he added.

But what about PrEP?

“PrEP is not covered by Ryan White. Yet, for negative partners of HIV clients covered by insurance or Medicaid, DPH often prescribes PrEP,” Deal answered.

“Since our legislature funds only a small fraction of Georgia’s HIV budget, much of what happens locally is shaped by the rules set forth by federal funding agencies. For a long time, federal agencies were disjointed in their approach to HIV prevention,” he said.

“With the National HIV/AIDS Strategy, federal funding agencies are now giving states a more unified and cohesive set of expectations. The mandate for prompt linkage to care and viral suppression is part of that. Things have been getting better in Georgia compared to 10 years ago but improvements have been gradual.

Leaders have been working hard to re- form and improve public health in Georgia, starting with making the Department of Public Health a cabinet-level agency, he added, but lots more still needs to be done.

From the CDC report

• 27.4 percent of Georgia residents diagnosed with HIV in 2011 were already at the third stage of infection, known as AIDS, compared to 24.9 percent nationally. This is considered “late-stage HIV diagnosis.” If these patients had been receiving HIV testing on a more frequent basis, such as annually or every six months, their HIV infections could have been detected much sooner. This would have made it possible for them to receive medical care and delay the onset of AIDS.

• Only 71.6 percent of Georgia residents diagnosed with HIV in 2011 were linked to medical care within three months after diagnosis. Furthermore, the report indicates Georgia had the worst statistic for linkage to HIV medical care within three months when ranked among the 19 jurisdictions (18 states plus District of Columbia) that have data for comparison. The top three jurisdictions with the best statistics for prompt linkage to HIV care were North Dakota (100 percent), Wyoming (93.3 percent) and South Carolina (91.9 percent).

• Only 43.6 percent of Georgia residents diagnosed with HIV in 2011 were retained in HIV care, giving it the seventh worst ranking for retention in HIV medical care when ranked among the 19 jurisdictions (18 states plus District of Columbia) that have data for comparison. The top three jurisdictions with the best statistics for reten- tion in HIV care were Iowa (58.8 percent), California (58.3 percent) and New York State (58.3 percent).

• The average death rate among Georgia residents 13 years of age and older liv- ing with HIV in 2010 was 28.4 (per 1,000 Georgians living with HIV), indicating Georgia had the third worst death rate when ranked among the states with a similar burden of HIV disease. The jurisdictions with the lowest death rates were Illinois (15.3 percent), Virginia (18 percent) and California (18.3 percent).

• Metro Atlanta also ranks as the city with the third highest HIV incidence among males age 25- 34.

• Metro Atlanta is home to approximately 60 percent of all Georgians living with HIV. Within Metro Atlanta, the vast majority of HIV cases are concentrated in a cluster of 157 census tracts centralized in downtown Atlanta and the HIV prevalence rate in this cluster meets the World Health Organization’s definition of a generalized epidemic.