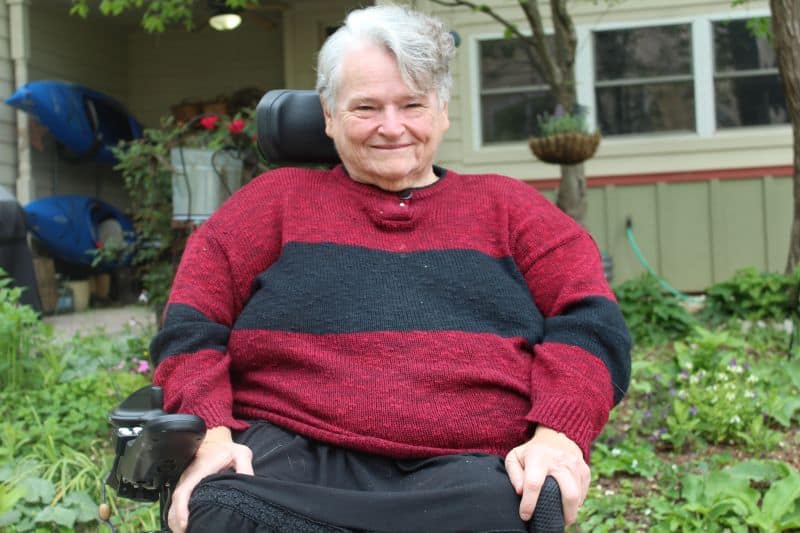 Quite often, you’ll find that LGBT activists have their hands in not just LGBT rights but other movements as well—women’s rights, immigrant rights, Black Lives Matter, Trans Lives Matter, etc. One that doesn’t get talked about often enough is the disability rights movement, and one of the longtime national leaders is a lesbian who has lived in the metro Atlanta area for over 40 years.

Eleanor Smith contracted a severe case of polio when she was just three years old and has been in a wheelchair ever since. The concept of “disability rights” wasn’t around when she was growing up, or even well into her adulthood. But after attending her first disability rights protest in San Francisco in the early ’80s, she was hooked.

She founded Concrete Change, a national disability rights organization, in 1986 and, using the term “visitability,” was able to help make historic changes for those living with disabilities both here in Atlanta and across the country. Smith retired three years ago but the passion for disability rights remains as strong as ever at age 73.

Even though I had a job at the time that was disability-related, my head didn’t turn around to think about disability as an actual oppression as opposed to something that made my life very difficult. At that time the national group [ADAPT] was working on the issue of public transportation because you could not get on the bus if you were in a wheelchair. So the movement chose the issue of getting a lift on every new bus. So I got involved in that movement.

I went to my first disability rights protest in San Francisco. While trying to work legislatively, we also worked at the civil disobedience level like all the great movements work—the gay rights movement, the black rights movement. I was just blown away at the power and the wonder of it.

When I came back to Atlanta, I had my own personal brainstorm which was to have a zero-step entrance on every new house. You can’t go back and fix every old house but you could start building every new house with access, which was a completely revolutionary idea.

The only thing in peoples’ minds was if somebody gets disabled, then you try to scrape up the money to widen their bathroom door and put a ramp on. It really created a system where a lot of [disabled] people couldn’t visit their friends or their close relatives, or couldn’t find a house to live in themselves. I founded Concrete Change in 1986 and that piece I took up to do became our mantra and our work. And that’s what I took on for the next 30 years.

What’s Atlanta’s record been as far as access for the disabled?

Certainly Atlanta has to follow the Americans with Disabilities Act. Whenever a new curb is laid, there’s a new curb cut. A wonderful thing on housing is that because of a lot of work on the part of the disability rights movement, the Fair Housing Act forces every new unit in a new apartment building to have basic access—wide doors and a few other features.

In terms of Atlanta itself being ahead of the curve on housing, in 1989 we were able to get Habitat For Humanity Atlanta to start building every new house with access. Habitat Atlanta was the first Habitat affiliate in the world to build houses deliberately with access for people who had no disability. It was a thrill to drive down Woodruff Avenue and see those first Habitat houses [with access].

Out of that, we were able to make a city law requiring zero step entrances and wide doors in new houses. And the wonderful then-City Councilwoman by the name of Myrtle Davis, who had a daughter who was a quadriplegic, she carried our bill for us. And it covered a lot of houses. Many hundreds of houses went up under that law.

For years it was enforced and then under [Mayor] Bill Campbell, we realized it was not going on anymore. That part fell apart, but what was cool was that it became kind of known throughout the country and others worked on it in other cities. So that Atlanta model, which was passed in 1992, was basically the first law in the country that covered some privately-owned houses and required them to have access.

What’s the next big disability rights challenge to tackle?

The next challenge not just for the organization but for everybody out there is to realize that a new house should be built with basic access, which is one entrance with no steps and wide enough bathroom doors—32 inches minimum. It’s not a question of whether it’s cheap and beautiful—that has been demonstrated through the tens of thousands of houses that have gone up.

Everybody needs to realize that the way houses are going up is discriminatory and it can be different. Every argument against it is false. There’s all types of arguments from people, but you can’t argue with the tens of thousands of houses that have gone up. The disability rights movement is an amazing movement and it’s one that a lot of people don’t even realize is a movement.