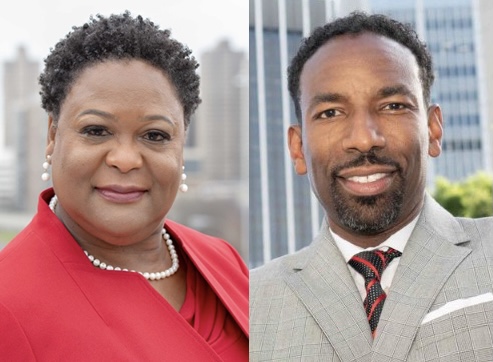 Felicia Moore (left) and Andre Dickens will be on the runoff ballot Nov. 30 / Photos courtesy of respective campaigns

Following the results of the election, Felicia Moore and Andre Dickens are the two candidates going to a runoff, which will be voted on tomorrow (November 30). Before you head to the polls, read up on how these candidates plan on addressing these issues as mayor of Atlanta.

Despite having a large Black trans and queer community, Atlanta has seen its share of fatal violence targeted at queer people and Black trans women are particularly vulnerable. Bianca “Muffin” Bankz, Tee Tee Dangerfield, Sophie Vasquez, Shaneku McCurthy, LaTea Tiger, Nino Fortson, are queer and trans women murdered around Atlanta. What is your plan to elevate the issue of violence against Black, Latinx, trans and queer people beyond enforcing hate crime laws?

Andre Dickens: Hate crime laws are an important addition to our justice system, and I support District Attorney Fani Willis’ use of the hate crimes statute. However, we cannot rely on hate crimes laws to rid us of the violence perpetrated against Black, Latinx, trans, and queer people. We have to work to educate the community and continue to create a culture of welcoming and affirmation both in and out of city hall. That begins by being willing to address and acknowledge the reality of the situation and acknowledging that there is violence targeted against Black, Latinx, trans and queer people.

Also, I believe that the mayor has a responsibility to create the most diverse and inclusive city government possible. That doesn’t just rely upon opening up applications and hoping a diverse group applies. There is untapped talent throughout the city that we have to recruit to come work for the city. That culture shift starts by bringing in more Black, Latinx, trans, and queer people into key leadership roles in the city, and, to be clear, they cannot simply be siloed off in the “diversity” or “inclusion” offices. Our diversity and inclusion should extend to all facets of city government. We need a broad and diverse coalition of ladders present and at the table for policy and decision making.

Beyond this, we have to address the root causes of hate crime against Black, Latinx, trans and queer people. Recognizing and investigating potential hate crimes should be part of our 21st century training for our public safety officials.

Felicia Moore: As our next Mayor, I will invite LGBTQIA community members to sit on and participate in major commissions, advisory councils, and boards inside my administration. I believe representation at the table where decisions are being made is crucial to changing the culture of our city, as well as the culture of policing and prosecuting. I also believe we need more and regular interaction between community members and our DA’s and police departments so that injured members of the community receive the justice they deserve, whether a crime is classified as a hate crime or not. I will be a strong advocate — and accountable to the community as such — to ensure that every crime victim in every neighborhood receives justice.

Trans people of color are not able to rely on the police. According to a 2016 report released by SNaP Co., 82 percent trans and gender non-conforming respondents do not trust the Atlanta Police Department. Transgender Latinas working on obtaining immigration status don’t look to police for help either. This is mainly due to fear of being deported, raped, or killed for being trans. Adding to this issue, many trans Latinx immigrants also experience language barriers as their primary language is either Spanish or a Native language, making it hard for them to advocate for themselves when interacting with police officers.  How do you plan to support LGBTQI+ Black & latinx immigrants who are escaping persecution and violence in their home countries, rather than arresting them?

Andre Dickens: First and foremost, I am committed to continuing the efforts of Mayor Bottoms and refusing to cooperate with ICE or participate in 278(g). We will not allow our public safety officials to become federal immigration agents in the City of Atlanta.

Secondly, we must again create a culture of trust and welcoming. I hope to create a network of organizations including non-profits, faith groups, churches, and individuals who can come together to open their doors for immigrants rather than turn them away. Atlanta has long been called “the city too busy to hate” and that has to extend to welcoming in immigrants who are escaping persecution and violence. They are looking for a safe haven, and simply arresting and prosecuting them does not solve the problem.

Lastly, as it applies to city services, we need to be more intentional about meeting people where they are. We cannot expect immigrants fleeing persecution and violence to come meet us at city hall to get the assistance they need. We must go out into the community and bring help and assistance to them directly. This has been started through the Community Navigator program under the Office of Immigrant Affairs. We must continue these efforts and expand upon them to better assist our communities who cannot or will not come to city hall to get help. We cannot be passive, but we must be intentional in reaching out to the people in need.

Felicia Moore: Atlanta is a welcoming community. I am proud to have been a strong advocate for opening our city to immigrants and refugees in my tenure on the Atlanta City Council. As our next Mayor, I will expand that welcome mat so that we provide translation services and multi-lingual materials (digital and print) are available. I will also task the Mayor’s Office of LGBTQ Affairs to identify gaps in services so that we can swiftly fill those gaps.

Laws that criminalize sex work push the industry into a black market, making it more dangerous and violent for many people, especially trans women. These laws also enable sex trafficking which is rampant in Atlanta and around Georgia. Do you support reclassifying or decriminalizing solicitation and loitering ordinances to remove the penalty of incarceration which disproportionately impacts trans people, youth, and victims of human trafficking?

Andre Dickens: I am open to fully exploring this option with advice on best practices, effective training methods, and an appropriate method for diversion and support. What I know is that there is a disproportionate incarceration rate for trans people, youth (especially LGBTQ youth), and victims of human trafficking. We must require, as part of new training and methods for our public safety officials, that diversion be the first option rather than an arrest. In addition, a large part of my SAFE Streets plan is to develop a system which allows a specialist to respond to these issues rather than an officer with a badge and a gun. This person would be focused on a diversion approach rather than incarcerating.

Our goal should be to reduce the incarceration rate, so I am committed to determining the best solution to meet that goal.

Felicia Moore: Yes, and within my first 100 days as our next Mayor, I’m going to build a 24/7/365, unarmed first responder unit to address the needs of unsheltered people and those experiencing behavioral/mental/emotional health crises. This team — separate from APD — will help those in need navigate to the services and supports to help them out of their crises. My goal is that victims of human trafficking or experiencing personal crises be served and not jailed.