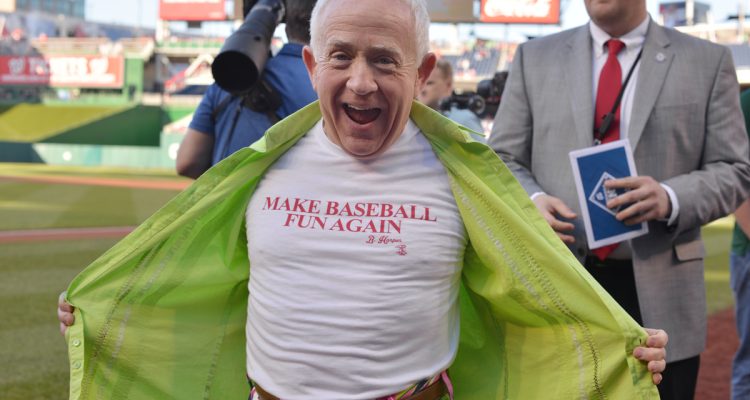 Leslie Jordan attends the Night Out at the Nationals on June 15, 2016. (Washington Blade photo by Michael Key)

Beloved out actor and comedian Leslie Jordan died in a single-car crash Monday morning in Hollywood after suffering an unspecified medical emergency, a Los Angeles Police Department source said. The news of his death was first broken by entertainment gossip news website TMZ.

The 67-year-old saw a resurgence of fame with his viral and hilarious videos on social media during the lengthy coronavirus pandemic. Jordan was best known for his roles as Lonnie Garr in “Hearts Afire” (1993–1995), Beverly Leslie in “Will and Grace” (2001–2006, 2017–2020), and several characters in the American Horror Story franchise (2011–present).

Jordan, an accomplished stage actor and playwright, was also devoted as an advocate for LGBTQ rights. Early in during AIDS crisis, Jordan, a Los Angeles resident, became involved in AIDS Project Los Angeles as a buddy and as a food delivery person for Project Angel Food, a non-profit founded during the HIV/AIDS pandemic which to this day prepares and delivers healthy meals to feed people impacted by serious illness.

“Leslie was more than just a supporter of Project Angel Food, he was family. When Leslie first moved to LA in the 90s he wanted to help people with AIDS so he volunteered as a driver for Project Angel Food. Leslie presented Project Angel Food with the West Hollywood Chamber of Commerce’s Creative Business Award in 2019, and was such a joy to be around. Our hearts ache.”

Two years ago in a lengthy interview with Page Six, Jordan revealed he once hated himself for being gay. The star and social media phenom told Page Six that homophobia and self-loathing were planted deep inside him growing up in a church-going family in 1950s Tennessee.

“If you’re born homosexual, it’s not a choice,” said Jordan, who has released a book of essays called “How Y’All Doing?”

“I think for myself when you know something in your heart and you’re [told] that’s just wrong … I talk to a lot of my gay friends and I say it’s a wonder we’re even alive!”

In a 2018 interview with the Blade, Jordan spoke about his career:

“It feels amazing. I’ve always been the funny guy that came in with a zinger. That was my job from the day I got here in 1982, with $1,200 that my mother pinned into my underpants on a Greyhound bus,” he quipped during a panel at the Television Critics Press Tour.

“I got off at the corner of Vine Street and De Longpre and I realized that was my job … 30 years I did that. ‘Will & Grace’ (which he guest starred in) won an Emmy for it. And I thought, ‘you know what? It’s time.’ Just the way it’s unfolded has been amazing.”