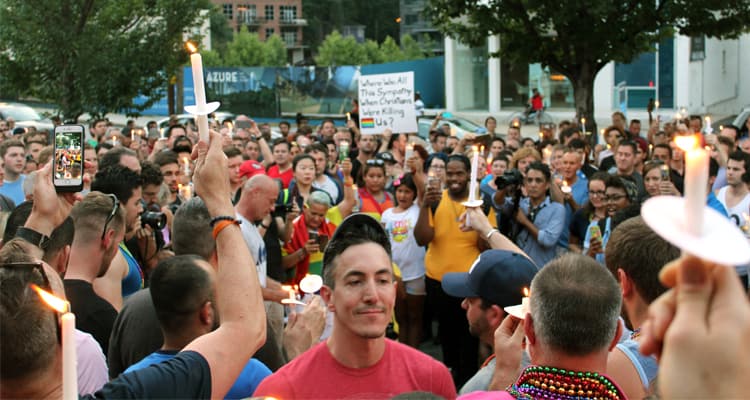 It’s been nearly three years since 49 people were killed when a gunman opened fire inside of the Pulse Nightclub in Orlando, Florida. Hours after the shooting, LGBTQ communities around the country including in Atlanta held memorials for those who were injured and lost their lives.

For Bruce Garner, the chair of the commission of LGBTQ ministries for the Episcopal Diocese of Atlanta, he learned of the shooting minutes before a sermon at a retreat in North Carolina.

“I was about to step into the pulpit to deliver the service. One of the altar servers showed me his cell phone with the message that the massacre had occurred. Let’s just say I changed the way I started the sermon,” said Garner.

When he returned to Atlanta, yet another memorial had been planned at All Saints’ Episcopal Church. This time, according to Garner, allies of the LGBTQ community decided to step forward and lead.

“It was done by straight people. They did not want anyone of us to deal with putting together a service. They wanted the service to be for us and for our comfort and benefit,” he said. “Having allies who are willing to step up to that level, to say we are here for your support, it was very moving.”

As this somber anniversary approaches during Pride month and on the heels of the 50th anniversary of the Stonewall Riots, Garner says the message will be one of inclusion and acceptance.

“As it turns out, the readings for June 12 honor the first indigenous person according to the Episcopal Priest. The reading from the gospel is a passage where Jesus tells his followers, that blessed are you when people revile you, hate you and exclude you on the count of my name and the fact that you’re following me,” he said.

He refers to gay Christians being labeled outcasts by non-gay Christians and those in the LGBTQ community for their beliefs. While this isn’t a specialized memorial service, the anniversary of the shooting does coincide with the church service. The church will remember those lives lost by joining with organizations around the world in tolling the tower bell 49 times to honor the memory of the 49 people killed, demonstrate support for the survivors, and spread compassion and love in the community and beyond.

“People are being persecuted for who they are and it’s still happening now. That’s why we are honoring the 49 people who were murdered,” he said.

The service is planned for Wednesday, June 12 at All Saints’ Atlanta at 634 West Peachtree ST NW, with the tolling of the Bell at 11:50am and Holy Eucharist at 12:05pm. The church also invites volunteers to join at 11:45am in the bell tower to help us toll the bell. For more information, contact Bruce Garner at bruce.garner@att.net.

The service is free and open to all regardless of sexual orientation, gender identity/expression, race, ethnicity, differing ability or any other characteristic.