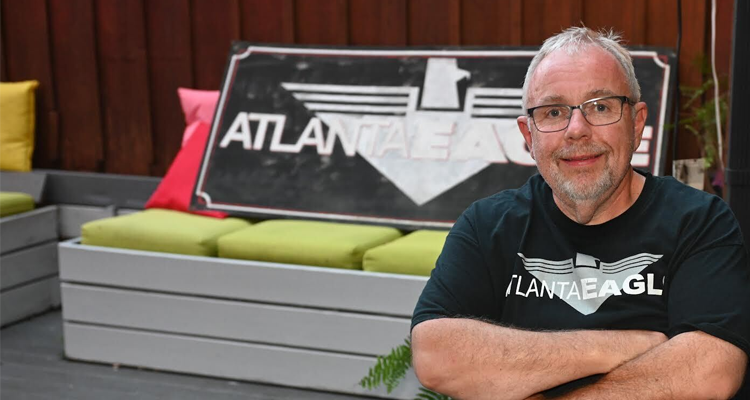 The Eagle Returns in Time for Pride

Richard Ramey was almost ready to call it quits. The owner of the Atlanta Eagle had been trying to find a new home for the nightclub for two years, scouring Midtown looking at location after location with no luck.

“It was taking a toll on me,” he told Georgia Voice. “It was like hitting brick walls.”

Then, at what he deems “the perfect time,” he got an unexpected phone call — while he was on vacation — that led to his new location at 1492 Piedmont Road in Ansley Square, the previous site of Midtown Moon.

The phone call was from the new owners of that establishment, HV Entertainment out of Houston, who were interested in working with Ramey. They had heard he had been looking at the home of the recently closed bar/restaurant The Highlander and met with him before any deal was struck, saying that they were specifically looking for their location at 1492 Piedmont Road to be re-branded. “The location is very intriguing, and I wanted it,” Ramey said. “I jumped on it fast.”

The Atlanta Eagle’s new home will be open October 7 for Atlanta Pride weekend. Ramey announced the news via Facebook Live on September 8.

He says he is ecstatic about the new location, especially for the parking it allows.

“I have always enjoyed the property,” Ramey said. “Here you can walk and leave your car and come to the Eagle. At the [old] location you couldn’t.”

The building where the Atlanta Eagle was located was designated as a historic landmark by former Mayor Keisha Lance Bottoms last year. Ramey and the Atlanta Eagle did not own the property, though, and when the landlord did not invite them back, they had to start looking for a new locale.

“I don’t like change, but it can be a good thing,” Ramey said.

The Atlanta Eagle officially closed at the end of November 2020 after COVID-19 ate into business, but Ramey had known for a while they had to move from 306 Ponce De Leon Avenue. He publicly said that the bar would be opening at a new location in 2021, but had no idea it would take until now to find a new site.

The establishment drew national attention when it was raided back in 2009 and eight employees were arrested. After court cases that followed, the City of Atlanta paid almost two million dollars to the victims. The case also led to retraining within the Atlanta Police Department and LGBTQ liaisons.

While he is glad to have a new home, Ramey is not happy that another Atlanta LGBTQ establishment has shut its doors. Midtown Moon closed September 24 after facing eviction and filing bankruptcy earlier this spring.

“I have been very sensitive about that topic,” Ramey said. “It’s devastating when we lose a space. Some people for three years called Midtown Moon their home. I get it. I have called the Atlanta Eagle my home for 35 years. I was a customer the first 10 years before I bought it. I want those people to know they are welcome and have a home. Luckily, we did not lose the space to someone else. It’s still part of the gay community. I am sad to see any business go under. It’s important to preserve as many of them as we can.”

A lot of people do not know it, but when Ramey bought the Atlanta Eagle alongside Robby Kelly 25 years ago, the estate of original owner Jay Evans declared bankruptcy after he passed away and the bar was set to close in a week. They were able to keep the establishment afloat, though. One of the founding members of Southern Bears, Ramey knew he wanted to be a place that was welcoming.

“Fat and hairy men were looked down on back then,” he said. “It was important for us to have a safe space. That is why it’s so important to me.”

All the organizations that used to call Atlanta Eagle home and host events there, such as Onyx, Panther L/L, and Southern Bears, will be returning.

“It’s all about community for me,” Ramey said.

He and his team are already starting renovations. There will be at least three phases, the first of which is getting the new space open. Phase Two will entail getting the legendary Atlanta Eagle dance floor open upstairs as part of the entertainment level, and the third is connecting to the Beltline.

Expecting huge crowds for the reopening weekend, Ramey will have a block party Pride weekend, with DJs in the parking lot. He’ll also have a presence in the Pride parade.

The new Atlanta Eagle will also welcome drag. Drag legend Charlie Brown will be part of a new Saturday Night Cabaret, starting October 8 and running from 9pm to 11pm.

Ramey promises the new location will look at lot different from Midtown Moon, and he is trying hard to replicate certain elements of the beloved old location.

“It will be a new space you can call home,” he said. “It’s going to be great for the community.”