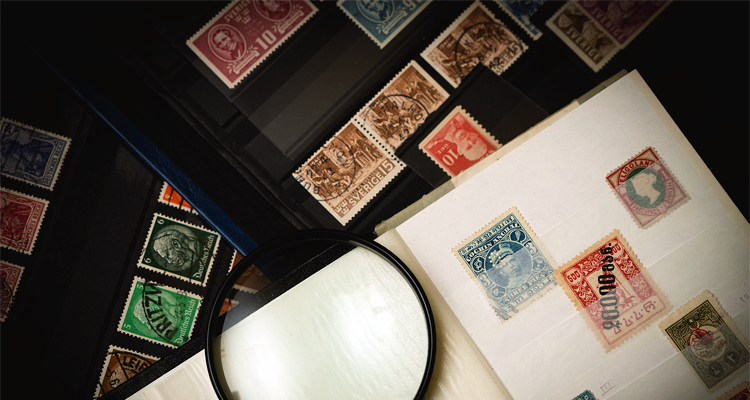 A Love of Philately

There’s no other explanation, really, how I got from there to here.

It all started when I was a little kid, six or seven years old probably. My dad’s father, Grandpa Jones, had a side business selling collectibles — mainly Hummel figurines and imported plates from Denmark. Every few months, I went with him to the various antique shows where he would set up his stand, and while he and my grandmother patiently chatted up other seniors about B & G commemoratives, I would go exploring on my own the other stands in the convention center.

What I was drawn to were old Life magazines from the 1930s to ’50s, with the beautiful full-page color ads and fascinating black and white photos from around the world. My grandpa’s one dollar “tip” he paid me for “helping” him was burning a hole in my J.C. Penney jeans, and I took my time lingering at each stand that had a collection of old magazines. But soon I became curious about something that was usually in a neighboring bin next to the Life, Time, and National Geographic magazines.

Beautifully preserved in clear plastic sleeves were old stamps, neatly organized like the card catalogue at the public library, separating country after country with a tab. My fingers ran across the tabs until I started finding exotic countries like “Romania” or “Mongolia,” places I had vaguely heard of but had no idea where they were on a map. The stamps were sometimes written in a script that was completely different from English, languages that were known to others who weren’t me, with images of castles, palaces and rulers who were equally mysterious to me. It seemed like each of these tiny prints told their own story, their own secrets waiting to be solved.

I found the one or two that captured my imagination the most and paid with my dollar. The rest of the weekend I would examine the stamps with my grandpa’s magnifying glass, wondering who the figure was, what the history of this far-off land entailed, and my imagination took flight as I began piecing together more about each of these foreign lands.

When it became apparent that this was no passing interest, my grandparents gave me a pair of books for my next birthday. The first one was a “Child’s Atlas of the World,” which became my constant companion. The back cover had about a hundred flags of the world emblazoned on it, and the interior had a simple map of each country with a cartoon drawing of the people who lived there along with a brief paragraph about that country’s population, language, and capital.

The other book my grandparents got me was a “Child’s First Stamp Album” (the two books must have been sold as a set, which was good marketing on the part of the publisher). I was enthralled and began leafing through the pages, seeing some of the now-familiar images of commonly circulated stamps from Brazil and France and Israel that I recognized from the antique shows I had gone to. That following Christmas my grandparents got me a subscription to National Geographic, which they continued to give me until I was well into my college years. But it was those first two books that I treasured the most.

Around this same time, I think my dad realized that I was never going to be the kind of son he could bond with by throwing the football together in the backyard — although he did try repeatedly to teach me how to throw a spiral. Thankfully, he decided instead to spend some quality father-son time by taking me to the local philatelist shops in the area. With my weekly allowance in my stiff leather Mount Rushmore wallet, my dad and I would look over the inventory of stamps from around the world and I made my purchases to add to my slowly growing collection.

This fascination with foreign countries and their history and culture might have begun in the dusty bins of the antique conventions of my youth, but it continues to this day and propelled me to finally take the leap by moving permanently to France. My grandparents as well as my parents have since passed, but the love and encouragement they gave me is always with me, and I think of them each time I paste a stamp on a letter.