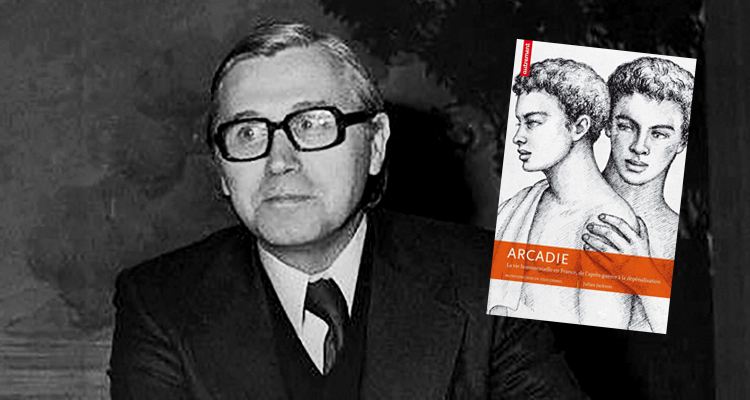 Monsieur Baudry (via Wikicommons) and an issue of "Arcadie Magazine."

French Pride Started on the Radio

During our second COVID-19 lockdown here in Paris this time last year, I began researching for a book I’m writing about the history of gay Paris (and if you are a regular reader of this column, you will probably enjoy the book when it comes out, so follow me at MonsieurBuckJones.Substack.com to find out when it is published). One of the fascinating bits of history I came across pertains to the origin of the modern French gay pride movement. If America’s LGBTQ+ liberation movement can be said to have started with that first act of defiance at Stonewall by Marsha P. Johnson and the other activists enraged by police repression, it can be said to have begun in France at a radio station.

Prior to the cultural and sexual revolution of ’60s France, gays were tolerated, but not overt in society. Paris certainly had its fair share of gay bars and saunas dating back to before World War II, with neighborhoods like Montparnasse and Pigalle attracting not just artists and writers, but gays and lesbians as well. But the police kept a close eye on such establishments, and even though homosexuality had been decriminalized during the French Revolution in 1791, there were still discriminatory laws on the books. For instance, Paris authorities passed a law in 1949 prohibiting two men from dancing together.

But even under the conservative governments of postwar France, gay men were pushing the boundaries of what was possible. One such intrepid figure was André Baudry. In 1955, Monsieur Baudry began the homosexual journal, “Arcadie,” named after the mythic Greek land that was synonymous with pure natural beauty, which immediately drew the attention of the authorities and was prohibited from being sold to minors. His objective was to promote a healthy homosexuality that was assimilationist, advocating that French gays were just like everyone else. Sales of the magazine took off when he included “personal ads” in the back, and soon he realized that there might be an opportunity to further his business.

A couple years later, he opened the first openly gay club in Paris. Baudry wasn’t much of a business marketing guru (he named the social club the “Literary and Scientific Club of the Latin Countries,” which in French has an acronym of Clespala — doesn’t exactly roll off the lips, even for a Francophone), but it had immediate success, nevertheless. The club soon became known as “Arcadie,” since subscribers to the magazine could also gain access to the club. While there, the gay patrons could ostensibly attend lectures, debate issues, socialize, and most importantly, they could dance!

Baudry ran a tight ship and banned anyone under the age of 21 from entering the club (that was the age of consent for homosexuals at the time, even though for heterosexuals the age of consent was only 15), but by 1960 political pressure built up and further repression targeting homosexuals went into effect. Not wanting to risk his little gay empire possibly being shut down by reactionary government decrees, he would expel any radical or dissident voices for causing trouble within Arcadie, whether they were gay youth, gay Catholics, or lesbians wanting more of a voice. Despite the official repression, he managed to keep both the magazine and the club going, earning a reputation within the gay movement as an authoritarian figure.

In 1971, Baudry was part of a panel on a popular radio talk show. Ménie Grégoire hosted a live broadcast on Radio Télé Luxembourg (RTL), and the subject of her March 10th episode was “Homosexuality, that unfortunate problem.” The “unfortunate problem,” or “scourge,” as the reactionary politician Paul Mirguet described it in 1960 when he tightened the official scrutiny on homosexuality, was to be discussed by Catholic priests, psychiatrists, and medical doctors. Word got out to the LGBTQ community about the program’s theme, so the theater where the radio show took place was filled with activists. When Baudry, ever the accommodationist, began explaining how much homosexuals suffered under the current social and political environment, someone yelled from the audience, “Stop talking about our suffering!” Soon, everyone in the auditorium was jeering the panel, and after Madame Grégoire began attacking lesbians by suggesting that all they needed was a man to give them satisfaction, the censors cut the radio broadcast short.

Enraged by the public humiliation of the LGBTQ community, a group of activists emerged from that radio audience and created the very French sounding “Front Homosexuel d’Action Révolutionnaire,” which began agitating for the sexual liberty of everyone. That year also saw the first gay liberation march in Paris, not as part of a separate “Gay Pride” march in June, but as part of the annual May Dawy militant march of the political left.

Today, the Paris “Marche de Fierté LGBT” takes place in June and attracts hundreds of thousands. It is still a highly political occasion, with militants within the LGBTQ+ movement, politicians, and performance artists parading with banners to highlight the continuing battle for full equality.

As for Monsieur Baudry, he and Arcadie slowly faded into obscurity following that fateful radio broadcast, eclipsed by the radicalism of the gay liberation movement. By 1982 he had retired to Naples, Italy, with his life partner Giuseppe.