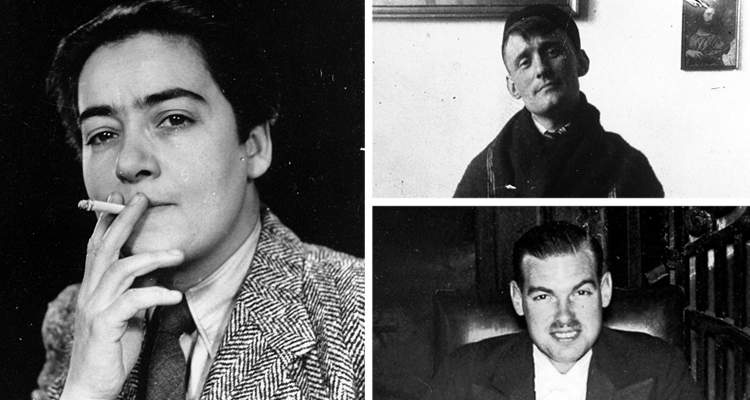 “Let It Be Known that Homosexuals Are Not Cowards”

Your land has been overrun by a rabid pack of voracious uber-jackals, and their slavering jaws are slowly pulling everything and everyone inside out. The border is closed. What do you do?

In May 1940, the Wehrmacht drove tanks into Netherlands — neutral Netherlands, where Queen Wilhelmina had provided the Kaiser with asylum after World War I. Now she fled to London, where she ran the people’s government-in-exile.

On the ground in Netherlands, one of the first Nazi mandates was that all artists in all disciplines must register with the Chamber of Culture (Kulturkammer). If not, buying a tube of paint or selling a sheet of music were forbidden. Why this measure? To prevent the spread of Cultural Bolshevism—Modernist and Progressive and anti-fascist propaganda.

But many Dutch artists refused to join this guild, and we now know of several groups of artists and saboteurs in that country with lesbian and gay male leadership. Netherlands had done away with its sodomy laws a century before. In fact, Netherlands had been an early State member of Magnus Hirschfeld’s Scientific Humanitarian Committee.

But as early as August 1940, German anti-queer laws goose-stepped in, to suppress ‘unworthy and anti-reproductive’ behavior.

“Sodomites” could get ten years in prison or face transport as a pink triangle.

Our artists worked particularly to produce realistic false identity cards. You lived and died by your card. Literally. The J or H stamped across the front meant a much thinner ration card. Detention. Disappearance.

The Amsterdam civil registry office was where all the information on each card was stored, and they began to notice certain mismatches and discrepancies. In March 1943, thinking there would be a huge crackdown on queer talents for creating something out of nothing, we sewed Nazi uniforms undetectable as fake, procured dynamite, had medical students overpower the registry guards with injections of sodium pentothal, and blew up the office — a feat which electrified the entire nation! Unfortunately, only a quarter of the files were damaged, but sympathetic firemen ensured that much of the remaining paper was rendered useless by the hoses directed into the place.

Regrettably, the participants were betrayed, but they inspired more and greater resistance by ordinary citizens. Willem Arondéus gave us these famous last words: “Homosexuals are not cowards.”

Van Klooster was born in Groningen and studied Dutch at the University of Groningen. She went on to study modern American literature at Columbia University in 1921. She obtained her doctorate in Groningen in 1924 with a dissertation on Edith Wharton.

In 1926, Tine and her partner Johanna Jacoba “Koos” Schregardus founded the publishing house De Spieghel in Amsterdam. They published several theses by female Ph.D. students — uncommon at the time. They also published art and history books and nature, games and sports books and magazines.

Van Klooster refused to join the Kultuurkamer, thus inviting suspicion and scrutiny. She and Koos hid the gay male resistance leader Gerrit Jan van der Veen. They were betrayed, and Tine was put on a transport to the Ravensbrück concentration camp for women. While only there for a little over a year, she died from the harsh treatment. Schregardus was not home at the time of the arrest, and so survived.

Born to theater costume-designing parents, Arondeus was encouraged to follow his artistic inclinations, but his parents’ refusal to accept his sexuality made him leave home at 17. He took odd jobs while continuing to paint. He began to get commissions — for a style that was “part Picasso, part Dutch Master.” Life was good until the Nazis came.

As the Nazis began to crack down, Willem turned to making fake identity papers. He also distributed “Brandis Letters” in which he identified cases of cultural collaboration.

He impersonated the Nazi officer in the plot to destroy the registry office, and was arrested a few days later among 13 others. He took full responsibility, but each of the 14 were shot. Defiant to the end, Arondeus’ final message, delivered through his lawyer, was that “homosexuals are not cowards.”

In 2004, the County Government of Noord-Holland organized an annual lecture, followed by discussion, in Arondéus’ honor.

She was everything the Nazis hated: half Jewish, activist lesbian, and a woman who held a man’s job: the conductor of a national chamber orchestra. She was the first woman in Europe to hold such a position. She even performed a weekly show on Dutch National Radio. When the Nazis took over, she lost her job immediately.

So, she turned her talents to forging personal documents for Jews and others wanted by the Gestapo.

The bombing of the public records office was her idea, and the group was quite excited about it. But the men would not let her participate, as it was “men’s work.” After the failure of the plot and then the betrayal of the group to the Nazis, Frieda had to impersonate a man for months until she could walk through Belgium and then France, where the French Underground helped her get to Switzerland (via an Alps crossing on foot). She eventually came to the United States.

Choreographer, poet, novelist and dancer with the Nederlandsch Ballet, Karel was a marked man, even before the Nazis arrived. The Gestapo wanted him on charges of antifascism and communism in 1941, so he fled to Germany, where he worked as a translator and streetcar conductor. But the discovery of his intentional sabotage meant he fled back to Netherlands.

Upon his return in 1943, he took up arms with Raad van Verzet (Council of Resistance). Among other things, they staged a daring raid to liberate Truus van Everdingen, the wife of a resistance man. Shortly afterward, he and his compatriots were betrayed. He was shot the same day he was arrested.

But no one knew his story for quite some time, because the Nazis employed a directive called Nacht und Nebel (Night and Fog). This unwholesome technique “disappeared” someone (desaparecidos) which meant no one knew what happened to them. Were they alive, needing medical care, or on a transport to some camp…?

A born athlete, de Jonge rowed for Netherlands in the 1936 Olympics. He then entered the military as war began to seem more and more likely. Later, he was released to work for Bataafse Petroleum Maatschappij (Shell Oil) in the Dutch Antilles. An English speaker, the government in exile recalled him to train in London with the crack British Intelligence office.

Once the invasion took place, he was inserted into Netherlands to set up a reliable spy network. Unfortunately, three months into the ops, De Jonge was taken into custody. He and 47 others were sent to concentration camps, where most did not survive, including de Jonge.