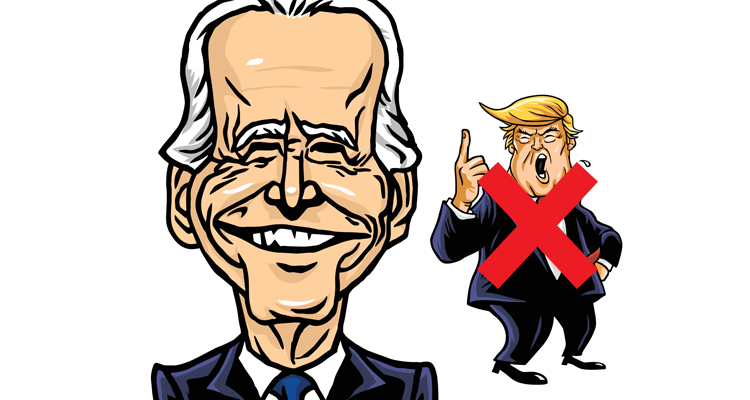 It’s over. Four long years of anxiety, sadness, anger and helplessness have finally come to a close.

When I went to bed on election night this year, I had an aching feeling that it would turn out like it did four years earlier with Hillary Clinton. Would I wake up the next morning to news that America had chosen a hateful, racist and uneducated buffoon as our president for the next four years? Would I finally have to execute my plan to move to another country for my own mental health?

I’ve been in an abusive relationship with a narcissist before, and the months of lying, confusion and complete psychological warfare did a number on me until I finally escaped and avoided him like the plague. How was I going to practice these self-preservation skills I learned through years of therapy with the president of my own country? The only solution seemed to be that we would move far away and embrace another country that had leaders and laws that protected us and who stood for all residents no matter what side of the political aisle they fell.

Finally falling into an alcohol-induced sleep, I dreamt of the last words I heard from the newscasters reminding me that the results in battleground states were too close to call due to thousands of uncounted mail-in ballots. I had read a handful of articles warning us of a #45 landslide. It made sense that most of the votes cast on election day were from DJT supporters, since the strategic propaganda coming out of the Whitehouse was that mail-in votes wouldn’t be counted and that voting in person wasn’t risky because COVID-19 was a Democratic hoax.

When I woke up after a few short hours of sleep, I turned on the television to see a shift slowly starting to happen that supported this theory. Little by little, the numbers started to change, and slowly but surely red states turned purple and then eventually blue. The next four days consisted of a slow burn of realization that America may have finally done the right thing. The silent majority had finally spoken, and we were sending a very loud and clear message that we have had enough.

It was a long, drawn out, daily process to get the clear blue results we were hoping for. I think all of us wished the process could have gone quicker, however my sick sadomasochist side got a kick out of knowing that the Hater-in-Chief was sitting somewhere in the White House being tortured by his rapidly shrinking lead day after day after day. I found great joy that when Georgia finally turned blue for the first time in 28 years, it also turned #45’s face into a bright, deep red. It made that final call for Joe Biden as President-elect that much sweeter.

Every day my shoulders get lighter and my Facebook feed gets brighter as the feeling of safety, security and sincere optimism returns to my daily life. Textbook research of true narcissism has proven that we shouldn’t be shocked that #45 is refusing to concede and is claiming the entire election process was rigged (even though Homeland Security has stated it was the most secure election in modern day history). It should come to no surprise that DJT is still trying to force himself on us even after America has clearly said NO. Every day that he and his Republican enablers actively try to destroy American democracy by refusing a peaceful transfer of power only gives us another reason to encourage Georgia voters to support Jon Ossoff and Reverend Warnock for the U.S. Senate run off on January 5th.

Electing them both will give President Joe Biden the power to finally take back America from the dark depths of hate, despair and division created by DJT.

I encourage you all to bask in the light that Georgia helped to determine the presidential race, but rest up well, because we still have work to do to see the Narcissist-in-Chief finally fall. Let’s send him off with a message that is loud and clear: his hate, intolerance and un-American values are no longer welcomed here. Get involved! Let’s remind the man who has made our country almost unrecognizable that “no” really means no and finally end this nightmare once and for all.