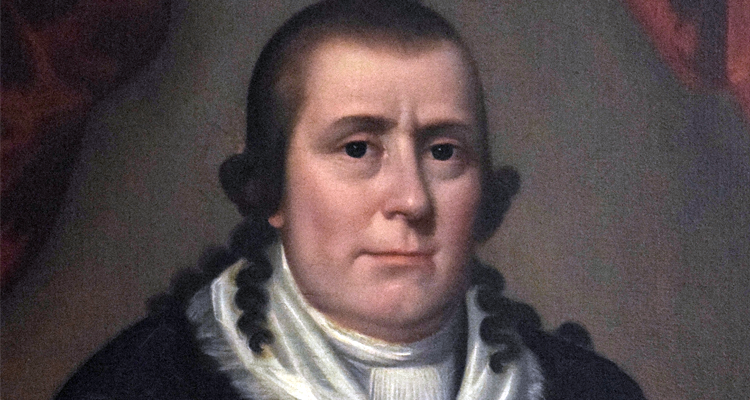 You wouldn’t think that Colonial America could present to history a “prophetess” (term used during their life), reborn from a frivolous and “gay” woman into a messianic leader who showed tens of thousands the Word of God.

In the colonial state of Rhode Island, Jemima Wilkinson appeared in 1752 as the seventh child born into an ordinary Quaker farming family. When Jemima was 12, her mother died giving birth to the twelfth child.

Jemima grew into an attractive, vibrant woman, preferring dancing, clothes, and the company of horses to the charms of meeting a man and having children.

When she was 23 or so, her sister Patience gave birth to an “illegitimate” child. As was customary, the entire family was shunned, and they were disinvited from their Friends (Quaker) meeting.

Not long after, Jemima suffered a four-day brutal bout with typhoid fever. The former Jemima Wilkinson, according to eyewitness accounts, “rose from the dead, like our Lord.” She had been a handsome woman, with startlingly black eyes and black hair long and flowing — and now, when they rode astride a horse, they were garbed in preacher-style robes, extremely daring and unconventional for someone regarded as female in that age.

The change was so fully transformative that they declared a change of (non)gender, and a new name to accompany the change: Public Universal Friend. They would not answer to their birth name, nor female pronouns. Nor would they wear any item of female clothing. And they proclaimed that messages and miracles came through them from Jesus Christ.

More importantly, others saw and felt the miraculous transformation of the former Jemima. Ezra Stiles, president of Yale and influential public intellectual, recounted “she died and is no more Jemima Wilkinson. But upon her restoration, which was sudden, the person of Jesus Christ came forth and now appears in her body with all the miraculous powers of the Messiah.”

It’s important to understand that this time period became known as the end of the first “Great Awakening” that took hold in the colonies (and then States). Among the shifts in consciousness was the idea that one’s immortal soul was at stake, and people fervently followed individual preachers, including itinerant preachers who rode from towns to townships to outdoor places people met to worship.

The Friend cut quite the figure, riding in with their long hair flowing, wearing preacher coverings, riding boots and men’s breeches, exhorting with a forceful and appealing voice and countenance.

And they would exhort and provide the firm but persuasive word of God on Free Will and the possibility of Universal Salvation, on how to live and create miracles from the laying on of hands. Preaching throughout southern New England, they espoused the equality of all races: white, Black, Native, which meant manumission of slaves and upholding treaties and the equality of the sexes.

Also, knowing the difficulties women have with childbirth and its repercussions, it is unsurprising that they advocated (voluntary) celibacy.

The Public Universal Friend had their followers, known as Universal Friends, purchase land in western New York state and build a township, New Jerusalem (later, Jerusalem), where everyone owned the land together. The Friend’s example did not sit well with many influential men: a woman who dressed as a man, who promoted radical ideas such as abolition and equality of the sexes, equality with the formerly enslaved (who would need work and lodgings and a church), and women not having to marry or listen to a man as head of the household.

Yet Universal Friends knew: “There is neither male nor female in Christ” (Galatians 3:28). Many women, single and not, inhabited the township. When the local Sheriff and his assistant rode to the main house to arrest Public Universal Friend for the crime of Blasphemy (quite serious at the time), the 40 women in the house and environs pulled the men off their horses, tore their clothes off them, and sent them on their way.