Gay politicos praised Lesser this morning after he delivered the invocation.

Joan Garner, a lesbian member of the Fulton County Commission, posted “Rabbi, what inspiring words this morning at the State of the City Breakfast. Thank you!” to Lesser's Facebook page earlier this morning.

Openly gay Atlanta City Councilmember Alex Wan sent out a Tweet during Lesser's invocation with a photo of the rabbi addressing the crowd. “Go Josh!” the Tweet read. 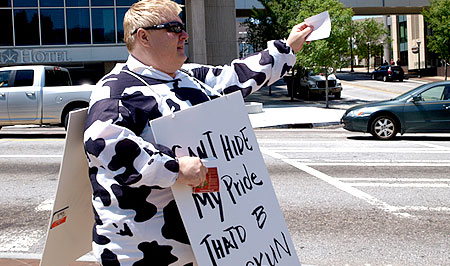 Four people — two dressed in cow costumes wearing sandwich boards that read “Moor equality” and “What’s your beef wif gay people?” — showed up at the corner of Centennial Park across from CNN to protest the Chick-fil-A Leadercast taking place at the nearby Georgia World Congress Center.

While the protest was scheduled from noon to 3 p.m., it ended at 1 p.m. because organizers had to return to work.

The small group of Queer Justice League and GetEQUAL GA supporters handed out “coupons” to passersby stating, “Reserve your free Bigot-fil-A Deluxe” with a list of some of the Atlanta-based fast-food restaurant’s anti-gay donations, including $1,000 to the Family Research Council, $5,000 to the Alliance Defense Fund and $15,000 to Serving Marriages Inc.

The Queer Justice League, a local LGBT action advocacy organization, announced plans to protest an upcoming leadership conference held by Chick-fil-A at the Georgia World Congress Center on Friday, May 6. The planned protest/demonstration is spurred by corporate donations to anti-gay groups from the fast food chain.

According to spokesperson Art Izzard, QJL will demonstrate outside of the GWCC and hand out literature to attendees.

“We feel if Chick-fil-A really wants to 'talk the talk' for leadership and change they should 'walk the walk' and adopt a corporate policy that protects all their employees from discrimination regardless of the legal requirements of a specific jurisdiction,” Izzard said in a press release.