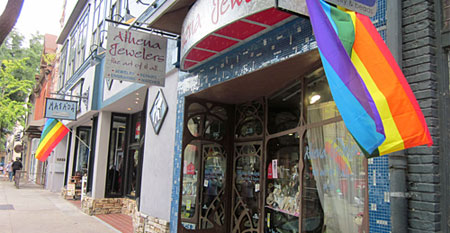 Gay rights activists in Athens are signing on to participate in this weekend's Worldwide LGBT Civil Rights marches, joining dozens of cities from across the country -- and world -- in an effort to raise awareness of ongoing LGBT issues.

The march is being organized by Athens Pride and GLOBES, the University of Georgia LGBT faculty organization, Our Hope MCC, Amnesty International at UGA, Lambda Alliance and sapph.fire.

Organizers hope to kick off the march from Lay Park to the famed UGA arch at noon. Speakers for the event include Athens Mayor Nancy Denson, Athens Pride chair Mike Chadwick and congressional candidate Tim Riley.

Newly elected lesbian state Rep. Keisha Waites (D-Atlanta) has been keeping herself busy in the Republican-controlled General Assembly since taking office last month by introducing resolutions to recognize friends and supporters over the years.

However, one resolution specifically wanting to recognize the Young Democrats at UGA as well as the university's gay-rights group Lambda Alliance and Ally Outreach was voted down — but not because it was pro-gay but rather because it was pro-Democrat, according to a Tuesday story by the Associated Press.

"Ceremonial resolutions are typically approved unanimously without debate. But this time, House Majority Leader Larry O'Neal, a Republican, successfully pressed to get the Democratic resolution removed from the pile. It was then rejected in a lopsided 32-104 vote," the AP reported.

"It's a political resolution that looks like the entire House is commending a particular political candidate and political philosophy," O'Neal told the AP. "We've got an election season coming up and I didn't want the other side running around with a resolution adopted by the entire House — Republicans and Democrats and independents — saying that we're commending and supporting Barack Obama, for instance, for president."

Athens Pride and the University of Georgia's LGBT faculty/staff organization, GLOBES, recently announced the 14th annual Athens Pride Picnic and Potluck will be held Saturday, May 1.

The picnic will be held at Lake Herrick Pavilion in the UGA Intramural Fields near the Ramsey Student Center from 1-4 p.m.

According to organizers, the picnic celebrates the university’s lesbian, gay, bisexual, transgender, or questioning staff, faculty, and students and allies.

The public is invited. Organizers ask that participants bring a potluck dish (no glassware) to the festivities.

Each year at the Martin Luther King Jr. March and Rally, LGBT representatives are asked to speak.

This year, Tracy Elliott, executive director of AID Atlanta; and Anneliese Singh, founder of the Georgia Safe Schools Coalition and assistant professor at UGA, will address the crowd at the rally.

The march and rally will be on Jan. 17, MLK's birthday and takes place after the annual Bayard Rustin/Audre Lorde breakfast at Saint Mark United Methodist Church.