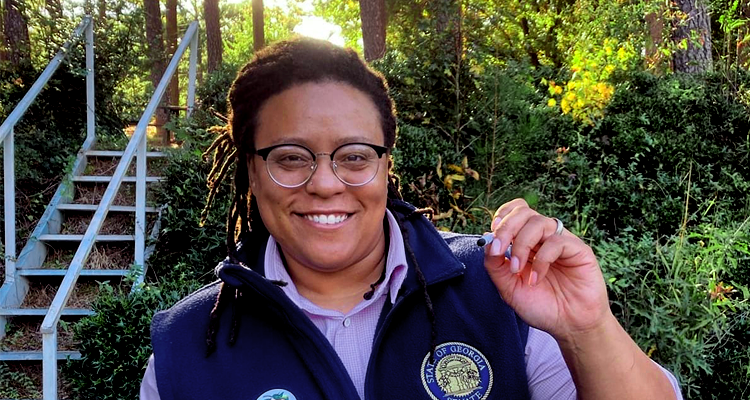 Georgia’s Only Queer State Senator is Urging People to Vote

State Senator Kim Jackson made history in January 2021 when she became the first openly LGBTQ state senator in Georgia. Now, she’s calling on queer people and allies to vote and get involved in the political process.

Jackson was the first out priest of color to be ordained in the Episcopal Diocese of Atlanta and represents Stone Mountain, Clarkston, Tucker, and Lilburn.

“It’s really difficult to encapsulate what it means to make history,” Jackson told Georgia Voice. “I am always inspired and grateful for young queer youth who come up to me.”

This feeling of warmth is accompanied by the weight of representing the community, Jackson explained. The need for LGBTQ representation in state legislatures is growing as states across the country propose and pass anti-LGBTQ laws.

Jackson explained what it’s like working with Republican colleagues in the legislature.

“As an LGBTQ person, the interpersonal relationships have been great,” Jackson said. “Nobody has said anything to my face. While Republicans may not say anything to my face about my identity, they worked really hard to pass anti-trans legislation.”

She talked about the disappointment of watching colleagues she considers friends, people who she calls on in times of need, actively work to pass discrimination against her community. Jackson expressed that Governor Kemp himself spearheaded the law by telling Republican legislators on the last day of the session that they needed to prioritize banning trans student-athletes.

It was after this when Republicans tacked the anti-trans statement onto the critical race theory bill, HB 1084

In direct contrast, gubernatorial candidate Stacey Abrams supports the rights of trans students to play on sports teams in alignment with their gender identity. As with most cases in modern U.S. politics, the Republican and Democrat candidates are split directly down the middle on LGBTQ issues.

In 2019, Abrams publicly condemned the Religious Freedom Restoration Act, which would have legalized discrimination against LGBTQ people on the basis of religion. Kemp said he would sign the bill into law, but he didn’t get the chance.

Governor Kemp has publicly condemned same-sex marriage and voted for a bill that would have banned it in Georgia when he was a state representative. Abrams has called for gay marriage to be codified into law.

In a response to being endorsed by the Human Rights Campaign, Abrams released a statement saying her campaign aims to reduce hate crimes and provide mental health and healthcare resources for queer people. In September, Kemp spoke at a conference hosted by the Family Research Council, which is designated as an anti-LGBTQ hate group by the Southern Poverty Law Center. In 2019, Kemp rejected expanding Medicaid eligibility to cover working-class Georgians living with HIV.

Also in 2019, Kemp signed a bill into law banning abortion after six weeks with some exceptions. That law is now in effect in Georgia. The Abrams campaign released a plan for reproductive healthcare that includes repealing Kemp’s abortion ban and funding rural underserved communities that lack OBGYNs, among other things.

Republican-led Voter ID laws, like SB 202 that passed in Georgia last year, make it harder to vote from home using an absentee ballot. Jackson noted that this negatively impacts some trans people who prefer to vote from home because their government ID might not match their identity. Abrams is perhaps best known for her strong stance against voter suppression laws and slammed the law as “Jim Crow 2.0.”

This year’s Harvard Youth Study found that 51 percent of people under 30 think the Republican Party cares more about “the interests of the elite” than of the voters and that 39 percent felt the same way about the Democratic Party. A Gallup Poll from last year found that 65 percent of Democrats held positive views of Socialism, while only 52 percent held positive views of capitalism.

As U.S. politics rapidly change, several young voters will likely feel the Democratic Party isn’t progressive enough for them, a sentiment that seems to have become more mainstream since the 2016 election cycle.

“I have a lot of empathy for people that feel [the Democratic Party] isn’t progressive enough, but the alternative will cause great harm to our community,” Jackson said. “I want to be clear that the only party on the ballot that will protect and care for queer youth in Georgia is the Democratic Party. I’m urging our queer friends to show up and vote like your future depends on it, because it does.”

Early voting runs now through November 4 before Election Day on November 8. Find your polling location and other voting information at mvp.sos.ga.gov.