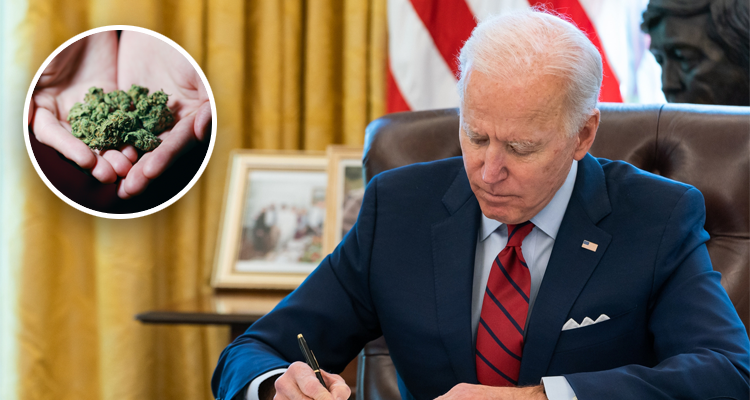 The Biden Pardon: Marijuana and the Midterm Election

On October 6, President Joe Biden pardoned the offense of simple marijuana possession for citizens and permanent residents of the U.S. Just short of federal decriminalization, as he promised in his campaign, Biden’s announcement has caught the attention of crucial voting demographics.

The White House announced the pardon just weeks before the midterm election cycle. Following the controversial student loan forgiveness plan Biden announced in August, this decision seems to be an attempt to revive the attention and support of Black, Latino, and young voters. The announcement does little to quell attacks from Republican-leaning platforms claiming Democrats are “soft on crime” amid rising crime rates.

Just weeks before the midterm elections, former President Obama is expected to visit Atlanta on October 28 for U.S. Senator Raphael Warnock, gubernatorial candidate Stacey Abrams, and other Democratic Party nominees. The 2022 general election will be Georgia’s first election cycle under Senate Bill 202, passed following Trump’s 2020 election fraud allegations, which requires a driver’s license or valid ID number on absentee ballots instead of only a birth date and signature. The number of drop boxes for absentee ballots was restricted under the bill, and the period in which to request an absentee ballot was shortened.

According to Georgia Secretary of State officer Mike Hassinger, Georgia experienced the worst case of voter suppression, especially among Black voters, in 2020. Voters are encouraged to vote in person during early voting to avoid absentee ballots being thrown out due to the new guidelines.

Marijuana is not likely to make waves during Georgia’s midterm elections, despite the announcement of Biden’s pardon and. Issues like abortion and gun control have been prioritized in campaigns and debates this cycle, especially in Georgia.

Outside Georgia, five states will have recreational marijuana use on midterm ballots. Arkansas, Maryland, Missouri, North Dakota, and South Dakota will potentially join the other 16 states and Washington D.C. that have legalized recreational use. Due to Republican opposition, federal legislation in the Senate has not passed.

The president encouraged other state governors to issue similar pardons, which would offer clemency to many individuals convicted of marijuana possession at the state level. The Los Angeles Times described the pardon as “offering categorical relief” to “a class of people deserving of relief.” Abrams also applauded Biden and stated she would do the same if elected.

The pardon will not remove charges from records. That can only be done by expunging individual cases. States most likely to sympathize with Biden’s plea have already taken steps toward expunging simple marijuana convictions in legalized states.

The Marshall Project reports that at least 6,500 people with prior convictions of simple marijuana possession and an unknown number in Washington, D.C, may benefit from the pardon. The pardon does not extend to those found guilty of intent to distribute or apply to those with other felony charges on their records.

While Biden expressed the goal to reduce the disproportionate number of Black citizens arrested and convicted of marijuana charges, despite their rates of marijuana use being equal to white Americans, the pardon will do little to remedy this. According to Nina Patel, Southern Poverty Law Center’s Senior Policy Counsel for Decarceration and Criminal Legal System reform, the re- or de-classification of marijuana would help to reduce the number of arrests and racial profiling, as well as the post-conviction poverty experienced by many.

Marijuana is considered a Schedule I drug under the Controlled Substances Act. This classification considers the drug not currently accepted for medical use with a high potential for abuse. Schedule I classifications include heroin, LSD, peyote, and MDMA (ecstasy).

When convicted of a felony and upon release, individuals are required to indicate their felony status on job and housing applications. If declassified and expunged, simple marijuana offenses would no longer create barriers for people seeking housing and employment. Potentially 40,000 American lives could be freed, for a drug that two-thirds of the population believe should be legalized.