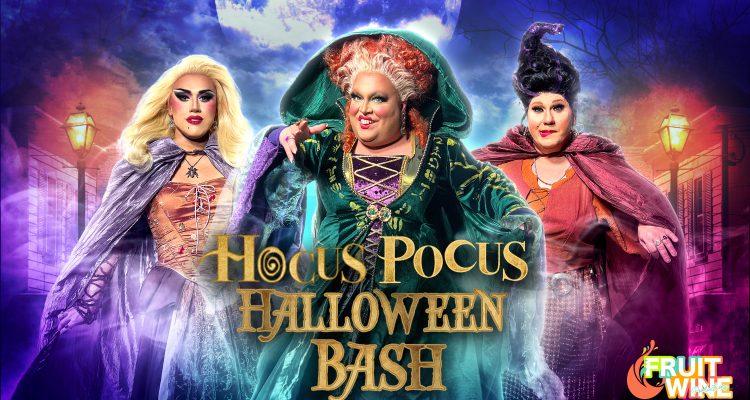 (From left) MR MS Adrian, Ginger Minj, and Gidget Galore bring the Sanderson sisters to life in a brand new story at Out Front Theatre on September 23 / Courtesy image

Ginger plays a drag queen version of Winifred Sanderson alongside Kornbread as Mary and Kahmora Black as Sarah. The three come face to face with the Sanderson sisters, and in the words of Ginger, “hilarity ensues.”

Ginger said that the experience was “surreal.”

“We’re dressed like these iconic characters, and we’re about to be two feet away from the amazing women who made these characters so iconic,” Ginger told Georgia Voice. “What do we do? What do we say? They didn’t give us a chance to do or say anything. This was maybe two or three weeks after ‘All Stars 6’ ended, and I walk on and Bette Midler goes, ‘You were robbed!’ She comes up to me, Kathy goes up to Kornbread, Sarah Jessica Parker goes up to Kamora, and they just start individually complimenting us about our careers and the things we’ve done and accomplished. They were fangirling over us in a way that was surreal and very disarming. We didn’t have the opportunity to get nervous around them.”

“The end of that week, the last shot we were a part of, we’re standing on the lawn, and someone screams, ‘One, two, three, fly!’ and the three of them just take off flying over our heads,” Ginger continued. “I just started crying. I was like, ‘Oh my god, eight-year-old me is just living their best life and dying right now all at the same time.’”

Alongside the “Hocus Pocus 2” release, Ginger will also be releasing a cover of the iconic track “I Put a Spell on You,” which you can presave here, along with a music video. The song will be a fresh spin on the classic, catered specifically to fellow drag performers.

“The music video is everything you expect in a totally new way,” she continued. “It’s almost like a mini movie, I don’t even want to call it a music video. It has all the pieces that you love and a couple of new things that are gonna make you go, ‘Oh yassss queen!’”

In regard to her upcoming “Hocus Pocus” themed tour, fans actually have Midler to thank.

“It all came about because right before we wrapped, Bette Midler came to me and said, ‘I like the way you do me, I would like to see you take this and run with it,’” Ginger recalled. “I was like, I don’t want to disappoint Bette Midler!”

What’s the show about? In the words of Ginger, “about an hour!” The show will blend pieces from the first and second movies together to tell a fully brand-new story. MR MS Adrian and Gidget Galore will join Ginger as Sarah and Mary, respectively.

“The Sanderson sisters have somehow come back, they find themselves in the modern world dealing with modern technology, and we sing songs that run the gamut, from Broadway show tunes to ‘WAP’ – if you’ve ever wanted to hear the Sanderson sisters sing ‘WAP,’ this is your opportunity,” Ginger said. “We have not made it through a single rehearsal without crying from laughter.”

Tickets for the Hocus Pocus Halloween Bash at Out Front Theatre can be purchased at outfrontheatre.com. The show starts at 8pm and includes a costume contest with a $500 prize. VIP tickets include a complimentary cocktail, autographed photo, and a meet and greet after the show.

Fans will get more of the Halloween queen herself on October 1 as the “Huluween Dragstravaganza” drops on Hulu, hosted by Ginger and Monet X Change. Also keep an eye out for Ginger’s upcoming book “Southern Pride Sass,” coming out next year.