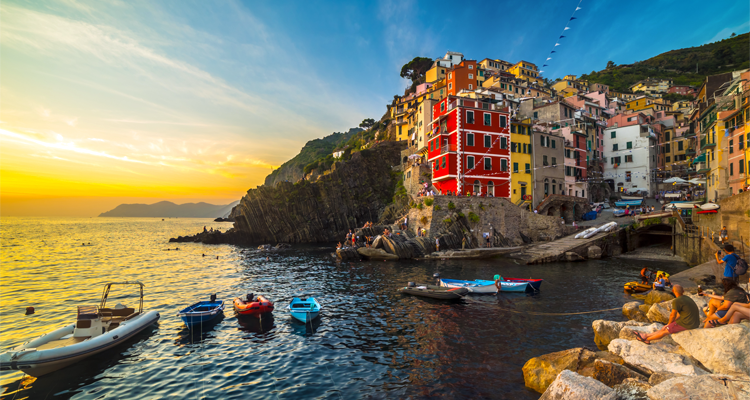 The thing about Italy — besides the pasta, the beauty of the men and landscape, and the occasionally frustrating disorganization of the Italians — is the sensuality of the place that subsumes everything. The expressiveness of its people, with their gesticulating even when talking on the phone, reveals a passion for living life to the fullest that inspires one to pause and take stock of one’s own priorities. Whether it is savoring the delight of a freshly baked pesto focaccia at lunch in a standing-room-only focacceria or appreciating the lithe cappuccino-colored bodies of young men walking back from a day at the beach, the Italian Riviera teases the senses.

Dotting the coastline of the Ligurian Sea east of the port of Genoa are the five ancient villages that make up the Cinque Terre. Improbably perched on the steep cliffsides that plunge into the azure waters of the Mediterranean, these picturesque towns began as tiny harbors for fishermen and hamlets for the farmers who tended their terraced vineyards that step up the surrounding hillsides. The tiny towns were originally connected only by a shepherd’s path that has since been expanded and developed into a more modern hiker’s crosscut through the forest that is today a protected national park. Stunning landscapes of the sea on one hand and vineyards on the other greet the adventurer. For those less inclined to make the hour-long trek from village to village, there is the train, which comes regularly and makes a whistle-stop tour as it passes from Levanto to La Spezia. But the best way to navigate back and forth between the towns is via boat; there is a ferry that provides a shuttle each hour and a day pass is relatively inexpensive.

While the Cinque Terre villages are overwhelmed by tourists during the July and August vacation months, things settle down considerably by early autumn. With temperatures exceeding ninety degrees and little access to air conditioning aside from one’s hotel room, the best time to visit these charming seaside jewels is off-peak season — there are fewer tourists, but the sea remains warm and crystal clear. Fresh seafood daily in the many family-owned restaurants along with the local white wine in plentiful supply quickly becomes a new routine, with lazy evenings after a long day of dozing under a parasol at the beach habit-forming. The Cinque Terre offer a relaxed alternative to the equally breathtaking Amalfi coast in Southern Italy.

During my stay, I had the sensation of stepping into a gay literary treasure trove. As I walked the narrow streets shaded by the mustard and ochre-hued buildings, I was transported to the world of Thomas Mann’s “A Death In Venice” as I surreptitiously glimpsed beautiful young men, often shirtless, standing together in small groups laughing and regaling one another with their exploits. Or while hiking the country path linking the villages, I saw my own living and breathing Elio from “Call Me By Your Name” riding his bike to Monterosso. The languid giddiness brought on by the heat, the wine, and overwhelming physical beauty constantly fuels inspiration for the creative soul.

The Cinque Terre are not, however, a classic gay destination in the same category as Capri, for instance. These are small towns that have changed little from generation to generation. There are no big global retail chains or luxury boutiques selling Italian leather and fashion goods, and the internet is hit or miss. Instead, one is transported back to a simpler time, forced to disconnect from the outside world and enjoy each moment of la dolce vita.

For those seeking a bit more of a raucous gay scene, Milan is the natural gateway to Cinque Terre and offers everything a gay traveler could want in terms of nightlife, fashion, and excitement. While staying in Milan, the logical center of gravity is in the city center, near the old fort of the Castello Sforzesco. The subway or street trams provide easy access to the chic Brera district, as well as quick jaunts to the gay neighborhood near the Porto Venezia or to the lively Navigli district near the university. Don’t forget to grab an Aperol Spritz at the grandiose Galleria Vittorio Emanuele II overlooking the intricately spired cathedral of the Duomo. Flying in and out of Milan with a three or four day stay in Cinque Terre during early autumn is a perfect excursion. Ciao bello ragazzo!