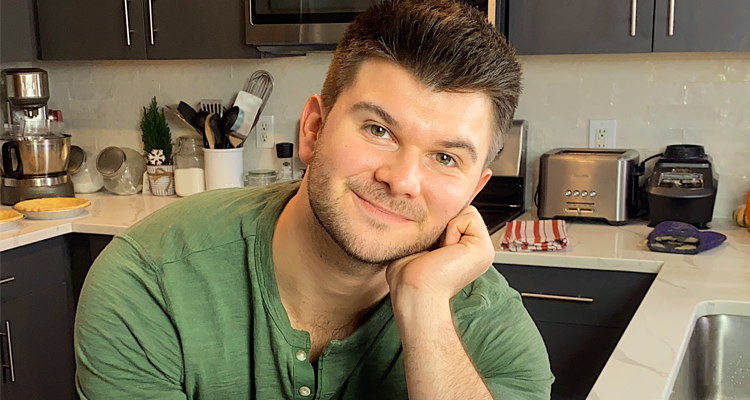 Oh, Honey! Bake it with AJ is Just Getting Started

For as long as he can remember, AJ DeDiego has found peace through baking. His mother, a professional baker and caterer, inspired his love of baking from an early age. Since his early childhood, AJ has been surrounded by his mother’s baked goods and pastries. His first attempt at baking was inspired by “Barefoot Contessa.” One day, after he got home from school, he saw Ina Garten making profiteroles on the TV.

“I was shockingly drawn to it, and I’ll never forget it,” he said.

With a handwritten recipe, AJ made profiteroles and never looked back.

“It became my therapy,” he said. “In high school, I had problems, depression, and coming to terms with myself, and I discovered baking rescued me.”

AJ is self-taught in both business and baking, and he shares his love for baking and easy-to-follow recipes on his website, on Instagram, and at TikTok. He has grown over 16,000 followers across the two social media platforms since 2020, published a cookbook, and participated as a contestant on the “Halloween Baking Championship” on Food Network. Still, this success comes after years of work.

It was in college, where AJ obtained a bachelor’s degree in Architecture, when he started a YouTube channel.

“[My YouTube channel] started everything I have now,” he said. “I didn’t know much about food; I just knew I loved it.”

On the channel, he shares baking tips and recipes for various desserts and pastries, with many gluten-free, keto, and vegan recipes. At first, though, the YouTube channel was hard to balance while working multiple jobs after graduation.

In his first year out of college, AJ got a job at Sprinkles Cupcakes, despite having no culinary experience. While most of his friends were still partying after graduation, AJ says he “would wake up at 3:30 a.m., make hundreds of cupcakes by 8, and I worked weekends.”

While working part time at Sprinkles, he got another part-time position at a high-end kitchen supply store and started a wish list of baking equipment, but he says he was very depressed during this time because he could not dedicate much time to his channel and baking.

The need for more income required AJ to find a full-time job, which would limit his time in the kitchen even more; however, a full-time position offered enough income that AJ could eventually invest in his passion.

“I always try to err on the side of positivity, even when it’s really hard to,” he said. One year into his full-time position as a flight attendant with Delta, the COVID-19 pandemic hit.

With a one-year leave of absence ahead, AJ dived headfirst into baking, something he hadn’t done since working full time. With the right equipment, money for ingredients, and more free time than ever, “it was like starting over on better terms … I thought, ‘I can do this.'”

AJ stayed positive during the pandemic and focused on his passion for baking, wondering how to turn it into a full-time career. It was a risk he was willing to take, he says, because “if you’re always in your comfort zone, you’re doing something wrong.”

AJ has been busy since beginning his business and launching an online storefront in January 2021. There, he offers handmade dessert mixes that simply need oil and eggs. In person, he sells his mixes at pop-up tables inside Williams Sonoma at Ponce City Market.

As a one-person show, AJ has done everything himself for two years — from making the mixes to shipping them nationwide while maintaining a solid social media presence. He hasn’t slowed down, either; he wrote a cookbook, “You Can Bake Too!” with recipes for “easy and impressive desserts.” It’s available on his website, bakeitwithaj.com.

AJ celebrates his many accomplishments over the last two years: publishing his cookbook, expanding his online storefront with merch and kitchen tools, making s’mores cookies on “Good Day Atlanta,” and appearing as a contestant in this year’s “Halloween Baking Championship” on Food Network — an experience he says was “intimidating, but I never allowed a moment to second-guess myself.”

His small business has become his sole focus, sharing his passion for baking as priority number one, followed by expanding Bake it with AJ to a commercial space in Atlanta. What started with profiteroles has become a booming business far beyond his wildest expectations. “[Baking] is something I love. It saved me in dark times, and I trusted myself enough to go somewhere with it.”