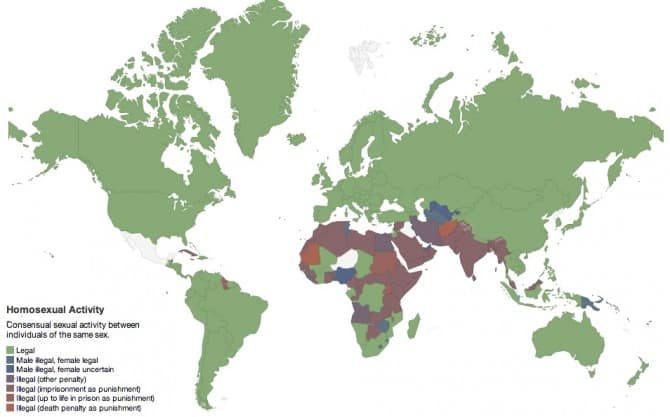 With the worldwide uproar over Russia’s “gay propaganda” law recently, it’s become clear that the LGBT community (and straight allies) are starting to take more of a global perspective on gay rights. Just in time, Equaldex, a new graphics-rich source for getting information on LGBT rights here in the US and around the world, has launched and it’s pretty impressive.

Equaldex is like a more attractive Wikipedia for LGBT rights. Want to know where same-sex marriage is legal? How about gay adoption? Open military service? What are the LGBT employment and housing discrimination laws in various states and countries? Jumping around the site gives you a quick reference point.

The site is dominated by an interactive world map, but a quick spin around gives access to a master timeline of LGBT rights, surveys, individual country pages with more detailed data, etc.

Equaldex is the brainchild of web developer Dan Leveille, an openly gay tech guru living in West Hollywood. He was inspired to create the crowdsourced web application in 2009, when several US states were considering changes in their same-sex marriage laws and he realized how cumbersome it was to find one comprehensive source to keep up with the changes—and show them in a visually appealing way.

The information is crowdsourced just like Wikipedia’s, and they have a detailed process of incorporating new information from users according to Leveille.

“Each edit that’s made to Equaldex is required to include reputable sources. Other editors are then encouraged to mark the accuracy of each edit,” he tells GA Voice. “When an editor marks information as inaccurate, they provide details about why it’s inaccurate. From there, a moderator will review and make necessary changes.”

Leveille acknowledges that due to the site being so new, there will be “some inaccuracies,” but that as more users take part, the information will become increasingly more accurate.

And while Equaldex’s current crop of LGBT rights information applies specifically to laws, eventually Leveille wants the site to be more than that.

“In the future, I want Equaldex to become a go-to resource for everything related to the LGBT movement.”