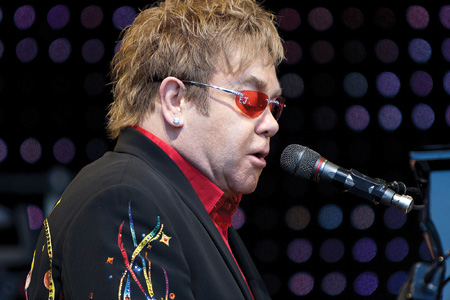 The THATcamp Feminisms South is a two day feminism “unconference” for anyone working at the intersection of feminism, the humanities, and technology. 5 p.m. at the Emory University Library Research Commons, http://feminismssouth2013.thatcamp.org

The art work of Tony Jackson, combining an American abstract expressive and Japanese narrative aesthetic, is on display from 6 – 9 p.m. at the Mister Center, www.mistercenter.org

After entertainer Destiny Brooks crowns Mr. Gay Cobb County 2013 at 9 p.m., stick around for “Uncensored,” a variety show filmed each week before a live audience with Brooks herself. Arrive at 10 p.m. to be part of the TV audience; the show starts at 11 p.m. at LeBuzz, www.thenewlebuzz.com

Edie Cheezburger presents The Other Show on Fridays. Doors open at 8:30 p.m., show at 9:30 p.m. at Jungle, www.jungleclubatlanta.com

Is it a dance party or performance art? Actually, it’s both. Bedlam Presents stages CirqueDeCabaret, a night featuring acts from aerialist Melissa Re, activist Chandler Bearden and many more, 10:30 p.m. – 3 a.m. at Jungle, www.jungeclubatlanta.com

Get ready for great alterna-grass as the women of Roxie Watson return to Eddie’s Attic. 7 p.m., www.eddiesattic.com

Hosted by Knomie Moore and Ally Yankadic, the Armorettes Follies benefits the AIDS Vaccine 200/Emory Vaccine Center from 8 -10 p.m. at the
Heretic, www.hereticatlanta.com

Grab your green for a St. Patty’s Glow Party, with lesbian speed dating on the newly finished patio, at 8 p.m. at My Sister’s Room, www.mysistersroom.com

DJ Escape returns to spin at 10 p.m. at the Heretic, www.hereticatlanta.com

Get your pancakes on as Occupy Our Home Atlanta hosts a brunch to support their housing justice movement. 11 a.m. – 2 p.m., 404 Glen Iris, Atlanta, GA, 30308, www.occupyourhomesatl.org

Join the Health Initiative and SAGE Atlanta, a group for LGBT seniors, for Chair Yoga every Monday through May 6. 10 a.m. at the Phillip Rush Center. www.sageatl.org

Wanna be the next big drag thing? Diva Drag University continues with a diva mentoring a new queen every week and preparing her for the upcoming Atlanta Rising Diva 2013 Pageant. 10:30 p.m. at LeBuzz, www.thenewlebuzz.com

Tuesdays, unwind with a sing-along with pianist David Reeb at 8 p.m. at Mixx, www.mixxatlanta.com

Every Tuesday, sing out at Mary-oke starting at 9 p.m. at Mary’s, www.marysatlanta.com

Attorney Jessica Young discusses the importance of wills for gay couples and singles at a Georgia Benefits Counsel presentation. 7:30 p.m. at the Unitarian Universalist Church, www.georgiabenefitscounsel.org

SAGE Atlanta hosts its weekly meeting, with different events and guests each week , 11 a.m. at the Phillip Rush Center, www.sageatl.org

Bring plenty of business cards to the gay Atlanta Executive Network’s Mix and Mingle, sponsored by Bill Kaelin Marketing from 6:30 – 8:30 p.m. at the Spice Market of the Atlanta W Midtown, www.aen.org

The HRC Pre-Dinner Reception will whet your appetite for the big event on May 4. 7 – 9 p.m. at the Margaret Mitchell House, www.atlantahrcdinner.org

The GoodLife Awards ATL honors those in different communities who have committed to striving for excellence. 7 p.m. at the Georgian Terrace, http://allevents.in/Atlanta/The-GoodLife-Awards-ATL/

The Sweet and Sleazy Dessert Speakeasy, featuring chocolate and other decadent offerings, is a benefit for the Atlanta Harm Reduction Center. 7:30 p.m. to midnight at the home of Amanda Plumb, www.atlantaharmreduction.org

Claudia Moss hosts an evening of motivational speakers, mini makeovers and food as part of Lift Up Atlanta’s Sisters of Motivational Empowerment Workshop from 1 – 4 p.m. at the Phillip Rush Center, www.liftupatlanta.org

Some camp, and much glam, highlights Dixie Does Drag, helping lead up to Dixie Invitational Bowling tournament. 7 – 9 p.m. at Jungle, www.jungleatlanta.com

Rachel Maddow brings her wit and intelligence to the ATL for a national tour on behalf of her paperback edition of “Drift: The Unmooring of American Military Power,” sponsored by A Capella Books and the Decatur Book Festival. 8 p.m. at the Atlanta Symphony, www.aso.org

Kick off the beginning of spring with Emerald Isles, a concert by the Atlanta Freedom Bands, 8 – 9:30 p.m. at the Druid Hills United Methodist Church www.atlantafreedombands.com

Augusta’s Metropolitan Community Church of Our Redeemer, part of the LGBT-founded MCC denomination, celebrates its 25th anniversary. Saturday events include a noon potluck, followed by a workshop at 1 p.m. with Rev. Elder Dr. Nancy Wilson, Moderator of MCC worldwide, both at the church. Saturday evening features a 6 p.m. dinner at the Partridge Inn. Wilson then preaches for the Sunday service at 11 a.m. at MCC of Our Redeemer.

The Emory Hope Clinic and The Center for Black Equity collaborate for a community night of networking and education, with host Funky Dineva. 6 – 9 p.m. at 595 North Event Center, www.hopeclinic.emory.edu

You’ll still be partying for Saturday night, but it will technically be Sunday morning as Carioca brings DJ Sin Morera to Xion, beginning at 3 a.m. www.cariocaproductions.com

Bring plenty of spirit to “Testify for Love: Light the Way to Justice,” a pep rally in advance of the Supreme Court’s hearing over marriage equality. 7:30 – 9:30 p.m. at the Georgia State Capitol, http://on.fb.me/Y5Kcs4

Angelique Burke presents the second part of her radical relationship series “Me, Myself and I: Experiencing a Love Affair with Myself” from 7:30 – 9 p.m. at Charis Books, www.charisbooksandmore.com

Georgia Equality and Lambda Legal team up for a town hall meeting to discuss the day’s Supreme Court hearing on the Defense of Marriage Act, with lawyers present to analyze the case. 6:30 – 8 p.m. at the Phillip Rush Center, www.georgiaequality.org

Watch recaps of the Supreme Court hearings on DOMA and Prop 8 at United For Marriage Watch. Mention that you are there for the event and 10 percent of your dinner bill will be donated to Georgia Equality. 6-10 p.m. at 10th & Piedmont. http://on.fb.me/16m42pD

Enjoy three songwriters in the round: Amy Andrews, Kyshona Armstrong and The Skipperdees at 8 p.m. at the Red Clay Theatre,  www.eddieowenpresents.com

In the Life Atlanta, which sponsors the annual Labor Day Black Pride weekend, hosts Network after Work from 6:30 – 10:30 p.m. at Fins Atlanta, www.inthelifeatl.com

Party with Impact: 20 years of Positive Impact is a night honoring the two decades of work done by the HIV agency. 7 – 10 p.m., The Wimbish House, www.positiveimpact-atl.org