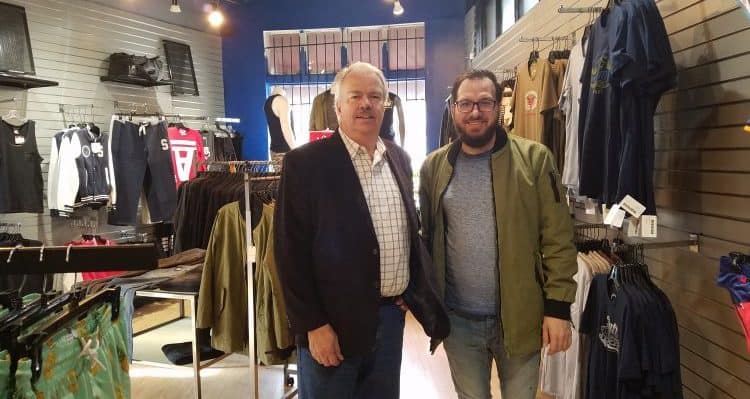 Boy Next Door Menswear, a staple of gay Atlanta fashion for more than three decades, is under new ownership and armed with plenty of plans for the future. The store, which describes itself as a menswear boutique, carries a full range of mens’ fashions from dress wear to casual wear, swimsuits to dress shirts and more than a few styles of underwear, too.

Bill Garner, Boy Next Door’s new owner, is an Atlanta native whose family reaches back more than 200 years in the region. He and his husband Ira, who he married in 2016 after being together for 16 years, were longtime customers of the store themselves. Bill tells stories of coming to the store since its opening back in 1980 – and he’s quick to say he plans on honoring its legacy.

“When I learned through friends that the store was available, I was excited by the opportunity. It’s always been a great store and has evolved over time. The store has a long history in the Atlanta community and has evolved with the times. We will continue to embrace the many customers and friends of Boy Next door who have always been there while also expanding to keep pace with the growth and changes in Atlanta,” Garner said.

Plenty of cosmetic changes are already underway, including fresh paint and a new look. Garner isn’t looking to change everything, but he’s certainly excited to capitalize on his own history with the store and the fact that he’s a local.

“We want to assure our customers that they will continue to to receive personal care and attention,” he said. “Now, with local ownership, it will get some additional loving care.”

Garner is quick to point out that it’s the store’s hometown nature and strong relationships with its customers that help Boy Next Door stand out against the competition.

“We are very proud of the personal relationships we have with our customers and we reward frequent shoppers through a loyalty program,” he said.

That attention to detail isn’t just a result of opening a boutique store in a tight-knit neighborhood. Garner is effusive about his staff and their passion for helping shoppers find the right fashions for the right moment, whether it’s a formal evening or a tropical cruise.

“The store manager, Rocky, and his staff are a terrific team,” he said. “Rocky, Tompall, Kyle and Michael all have a keen interest in fashion trends and they enjoy helping with selection, fits, colors and looks that are best for each individual. They are brand experts and always willing to consult and offer suggestions.”

In a time when “shop local” isn’t just a hobby but an ideology, Boy Next Door is able to bring new fashions and looks to cater to Atlanta’s gay community in a way that the larger, corporate stores can’t.

“As an independent boutique, we focus on designers that are unique and amazing,” Garner said. “A lot of thought goes into selecting the best fresh looks and trending styles. We carefully select boutique brands that are best in design and quality.”

It certainly doesn’t hurt that Boy Next Door is one of the few stores to stock swimwear and beachwear year-round, which Garner plans to continue.

“Our target customer is a man who is a trendsetter, not a follower, who wants to look his best while he is on the go, confidently living life as he chooses,” he said.

Boy Next Door plans on bringing the designers of some of its most beloved brands to the store to meet its customers. Famed underwear designer Andrew Christian begins the series with a book signing in April. And of course, because no Andrew Christian event is complete without ab-laden boys in underwear, he’ll be bringing a model with him, too. Future brand designer guests include 2EROS, BWET and SUPAWEAR.

Part of Boy Next Door’s legacy is its contribution to the larger Atlanta LGBT community. It’s often a destination store for tourists coming to town for Atlanta Pride and other events, which makes Garner incredibly proud.

He describes Boy Next Door as “part of both the history and the future of the Atlanta LGBT community. Atlanta is one of the few cities with an active community with restaurants, bars, parks and friendships that span decades. We enjoy the diversity within the LGBT community and are pleased with the cooperation among the multiple special interest groups. We welcome everyone to the store – gay, straight, men, women, couples, new to the community, established or just starting out. We are open to all. My husband and I are proud to call this community home.”