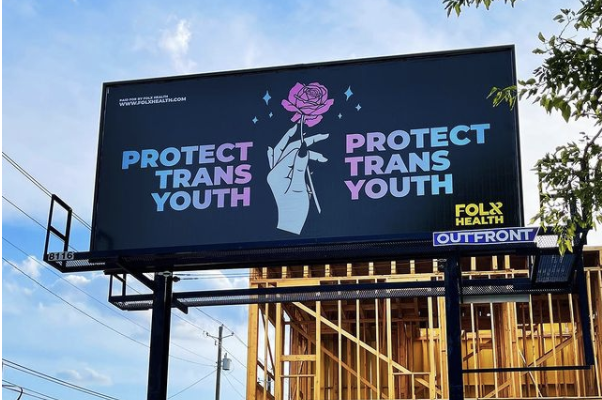 Atlantans might see a large billboard reading, “Protect Trans Youth” in town this summer. FOLX Health is running the billboard as part of its “Taking Up Space” campaign during a time in which trans rights are being debated in legislatures across the country. The company is also running similar billboards in Little Rock, Arkansas and Austin, Texas, two other states where trans rights are being threatened by lawmakers.

FOLX Health is a telehealth startup that focuses on queer and trans healthcare, providing services such as HRT and PrEP in 31 states across the US. Georgia Voice spoke to Rocco Kayiatos, the company’s VP of Marketing, about the billboard campaign and the brand’s mission at large.

“FOLX Health is the first and only LGBTQIA+ digitally native health platform created by and for the Trans and Queer community, providing a new and accessible resource for healthcare,” Kayiatos said. “The traditional healthcare system consists of disjointed providers who don’t understand the LGBTQIA+’s community health needs and contains endless government hurdles, leaving millions of people to defend their bodies, sexual choices, families, and goals for themselves.”

To Kayiatos, creating space for others is paramount.

“As a man of trans experience – one that has straight and cis passing privilege – I often think about how I occupy space, how can I be a better ally, how can I create more space for others who came before me to create the space that I occupy with more ease,” he said. “I think about the interconnectedness of the queer and trans legacy of space-makers and want to make sure I follow in their footsteps, creating more light to shine on the path we are all carving together.”

The “Taking Up Space” campaign as a whole certainly meets some of these goals. It includes a short film as well as a hashtag for various members of the LGBTQ community to use on social media. And on top of the virtual space claimed by participants and their stories, the billboards take up literal space, prominently displaying a message intended to provide support for the trans community.

“Trans people, especially trans kids, need to see and hear that their lives are valuable,” Kayiatos said. “It is important for organizations to share this message over and over to ensure that everyone understands that trans youth are youth and deserve our protection.”

FOLX Health hopes to use these billboards as more than simple advertisements, seeking a reach and an impact that goes far beyond selling the products it provides. Not only does FOLX hope to guide members of the LGBTQ community toward affirming and understanding healthcare, but it also hopes to spread the message that trans youth matter with these billboards.

“With each of our billboards, we want the message to be heard, felt and integrated into people’s daily lives,” Kayiatos said. “We want everyone to understand the value of trans lives and provide visibility for the community. We hope that trans people see these billboards and feel seen, loved and understand that their lives matter.”

Kayiatos hopes that people recognize that “these billboards go beyond just a marketing campaign” and that they make a lasting impact on the communities in which they have been placed.