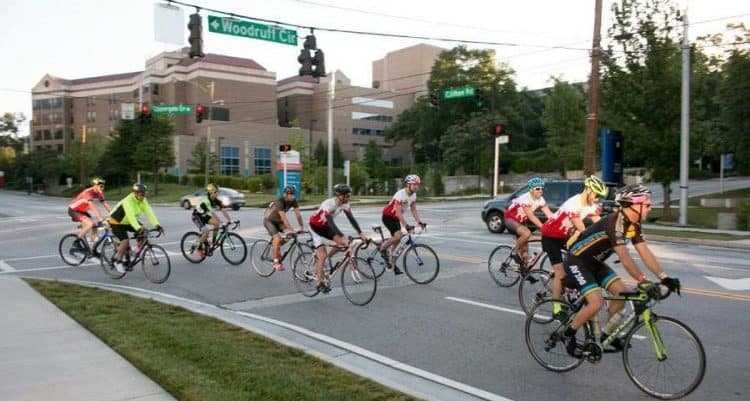 It’s time to get on your bikes and ride.

This weekend, more than 100 cyclists take to the streets for a 200-mile bike ride benefitting HIV and AIDS research in Atlanta.

“We’re 30-plus years into this HIV/AIDS epidemic and we still don’t have a cure. I think it’s very important that we keep the funding and we give them whatever we can give them so they can continue doing what they’re doing. We are so close to getting the vaccine and it’s happening right here in Atlanta,” said Scott Drinkard, president of the Action Cycling Atlanta Board of Directors.

His organization puts on the AIDS Vaccine 200 each year. Though Drinkard didn’t reveal the exact route for 2017, he said it would parallel Interstate 20 and snake through Decatur, Stone Mountain and the Georgia countryside.

“I have seen places and I have seen areas that I swear I never knew existed,” he said. “It’s just great being out there on the road and not worrying about the city. It’s a great weekend. You don’t even realize you’re doing hills.”

Festivities begin Friday night with a kickoff meal at the Emory School of Medicine, featuring researchers and fellows working on the AIDS vaccine.

“Some of the dollars we help raise actually pay for the salaries of some of the folks doing the research,” said Jonathan Karron, marketing chair for the organization. “They share with us an update on the research that they’re doing and some of the clinical trials and successes they’re having, and setbacks. It helps us connect much more with the dollars we’re raising and what the impact is.”

The next morning, cyclists ride to Rock Eagle 4-H Camp in Eatonton, almost 100 miles on the nose from Emory. That night, they’re treated to a meal, massages and reflection on the lives affected by the disease.

“People share their stories about why they actually ride. It’s a somber moment to share their story. We also have a riderless bike. We take a bike without a rider as a symbolic gesture because we’re riding for those who can’t ride,” Karron said.

Sunday morning, riders leave the camp and bike back to Decatur, where a police escort brings the whole group back to Emory together.

“It was actually founded because a bunch of folks went and did the AIDS ride in Europe and had an amazing experience, but were fundraising to support charity [and] after the ride realized very few of their dollars actually went to the nonprofits because there were such high operating costs,” Karron said.

The group came back to Atlanta and decided to do their own version, where all the money raised went to a nonprofit. Sponsorships cover all the overhead costs to put on the Atlanta event.

The Emory Vaccine Clinic was selected as the original beneficiary of the ride’s funds, and over the last few years cyclists were able to split their fundraising dollars with other community organizations that support HIV and AIDS research and education.

“We’ve got a lot of good research going on,” cyclist and Emory University employee Amanda Watson said. “That’s where a lot of this stuff is happening, so we can have an impact locally.”

Watson volunteered for four years before deciding to get on her bike and ride in 2017.

“It’s just a really good group of people. We’re all going to be tired and riding for 200 miles. I suspect we’ll all try to enjoy ourselves while doing it,” she said. “We stop every 15 to 20 miles and refill drinks, get snacks.”

She said the distance is a little intimidating, but her goal is to do as much as she can.

Karron said the 200-mile distance shouldn’t discourage riders — there are plenty of people who relay the distance together, or who ride as much as they can before hopping on one of the support vehicles that follows cyclists along the route.

To participate, cyclists must commit to raising at least $500. That can be done in a plethora of ways. Karron said in the past, riders solicited donations via email and social media, held fundraising events and even this year hosted Dixie Longate, an entertainer who dresses in drag to sell Tupperware.

“It’s one of those things that I get chills every time I talk about it,” he said. “I will stay with this ‘til we’re done. It just captured me.”