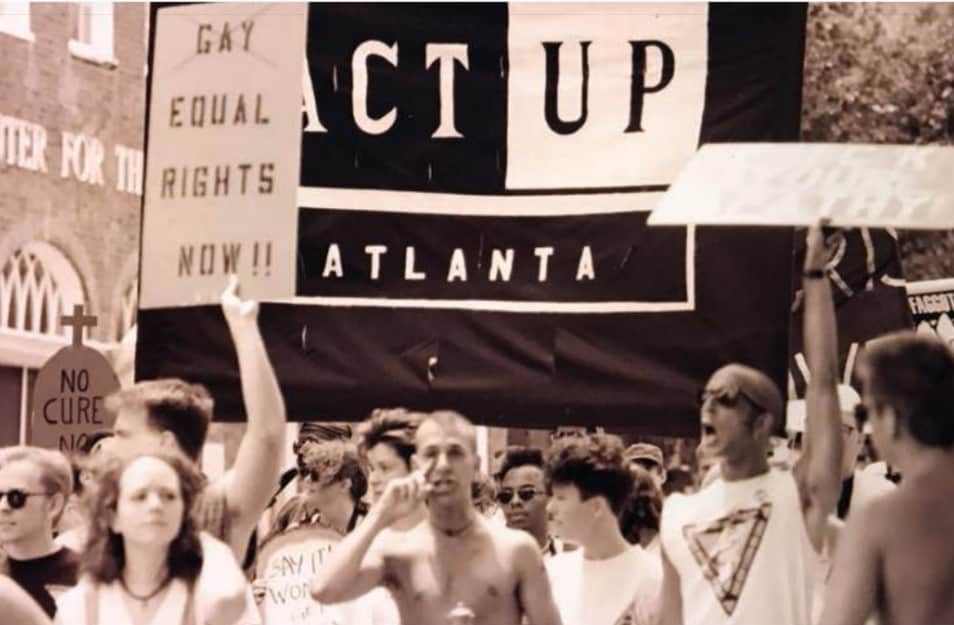 “I was there in 1971, but I had just graduated from high school and was really nervous. I watched and waited in Piedmont Park until the march arrived. Not a lot of people. I regret not having joined at the start. I have since marched about 10 times in Atlanta Pride.”
-John A. Leopard

“1989. There were a mere 13,000 marchers in the whole event, yet we felt empowered … even with armed guards and chains and lock on the First Baptist Church on Peachtree, while across the street Saint Mark welcomed marchers with water.”
-Gre Chanda

“Last year. I had just come out, and my mother completely stopped talking to me. I went with all my siblings, my dad and my stepmom. It made me feel amazing to see the community, and to get to enjoy that with the family that accepted me.”
-Courtney Boutwell

“1982. We all gathered near the corner of Peachtree Street and Forrest Avenue, now called Ralph McGill Boulevard. There were maybe 500 of us. No corporate sponsors. No floats. No politicians. Just a few hundred of us brave men and women. We marched down Peachtree to the steps of the State Capitol. Speeches. Pride. Protesters. Police. I was 20 years old. We’ve come a long way baby, and still got a long way to go.”
-Lenny Berman

“Shaun Alex getting lost and peeing in a bush holding hands with a stranger I had just met and then becoming good friends.”
-Bryant Couvillon

“I moved to Atlanta in the summer of 1978 and [it was] my first Pride parade ever since I moved from a very small southern town that was not gay friendly. Since I had a 3’x5′ size gay flag, I walked in the front of the parade along side of a gay friend of mine that carried the US Flag. We walked together side-by-side. We were not many then, yet it was important. My Georgia Tech co-workers on the Monday afterwards said they saw me on TV and I expected hell from them. Instead it was support, joy and happiness from them. My first Pride parade!”
-George Smedberg

“1996 when The Olympics came to Atlanta! It looked like over 300,000 people attended. Most fun I’ve ever had! The Indigo Girls performed and Mrs. Coretta Scott King was a guest speaker.”
-Angelia Love Henderson

“Volunteered first aid as I had just finished EMT school. Worked under Dr Roth. Was a blast.”
-Andrew Martz

“My First Atlanta Pride was 2016. That’s because I relocated from Chicago Sept. 8. A friend of mine who works for UPS asked if I wanted to March in the parade. Of course I said yes and the rest is history! I felt this was the way to be introduced to the Atlanta gay community and I really loved it!”
-Glenn Bernard

“It must have been 1990. On Peachtree Street, there used to be a Baptist church directly across the street from Saint Mark Methodist Church and we were marching between the two. I was nervous anyway, but I really got scared when I saw the signs and heard the chants from the people in front of the Baptist church. They definitely were angry we were there. I looked to the right and saw another crowd in front of Saint Mark. A woman came running straight to me from the sidewalk and I braced myself for whatever she had in mind to do, but as she got close enough for me to hear what she was screaming, I realized she only wanted to invite me to Saint Mark. She said ‘Jesus loves you and you are welcome at our church any time!’ I burst into tears as I took the flier from her hand.”
-Margaret Ruth Mitchell

“Meeting Chasity Bono and seeing Montel Williams and Rupaul. It was my first Pride in 1996. What a star-struck day.”
-Day Landseadel

“My first Pride was in 2003. A few of us queers drove down to Atlanta from Gainesville for the parade. I had no idea how many LGBT people were in Atlanta alone! And it was so hot! I can’t tell you how glad I was when Pride was rescheduled for October a few years later. About halfway through the parade, I got bored and went to check out the vendors. I bought my first Pride souvenirs: a keychain and an embroidered T-shirt. I still have them, faded and ripped as they are.”
-Dale Jackson

“My friend Todd Green. He had VIP invitations to all the clubs and parties in 1990 and we went to them all.”
-Dixon R Smith

“Being in the PFLAG group in the parade … a long time ago!”
-Mary Kolcum Warwick

“1987. Not my first Pride parade but it was the first for my partner, now wife. Susan worked for DeKalb County Schools so she marched wearing a huge sun hat and large dark sunglasses, so afraid that a parent or teacher would recognize her from the news coverage and end her career. But she marched and I was so proud of her. Still am.”
-Nancy Wilkinson

“I was 16 and it was 1986. My grandmother saw me marching with the Armorettes in a bright yellow sun hat and marching dress.”
-Kelly Mathison-Voltz

“My girlfriend and I went to Pride and set up our tent in the lawn. We left our tent and went and walked the market. When we returned, I could tell our tent had been moved. As anyone that has been to Pride knows, you can’t stake your tents and wind is a problem. Two guys came running up to us to tell us that there was a gust of wind that blew our tent down the lawn and they chased after it, drug it back and tied it to our cooler for us. This is my go-to story when I explain to people why Pride is important to me. There is just such community and love. It is the one weekend a year I can just go and be with my people and be surrounded by love and happiness. You need a paper towel? Here I’ve got plenty. Need help putting up your tent? I’ve got arms to help. One time a stroller started rolling down the hill with kids on board and someone reacted quickly and grabbed it. I have experienced countless incidents like these at Pride and it’s why I go.”
-Dallas Colla

“Mine was 1978. I was 7-years-old marching with my uncles, cousins and aunts. It was a great time had by all. I have been marching and supporting since that time. We used to gather at Forrest Avenue and Peachtree Street. Family fun.”
-Charlton Singleton

“The first that I remember was in 1981. Everyone gathered in the park at 10th and Charles Allen. Ron Beazley had just opened The Atlanta Balloonery (at 14th and West Peachtree) and so he brought a tank of helium and 1000 lavender balloons, which we proceeded to inflate and give out. Then we marched down 10th to Peachtree and continued south on Peachtree with 1000 lavender balloons waving in the air to the Georgia State Capital where several gay leaders made short speeches, after which we all released our balloons into the air. Little did we know what madness was in store for us all and how many would be gone far too soon from the plague.”
-Gary Dixon

“2008. Just came out and my mom stopped talking to me. PFLAG had a booth where you could get a hug from a mom or dad. There was a line for people waiting to be held by an accepting parent. I got choked up wondering if that would be me one day.”
-Shannon Hames

“My first Pride, 2013, made tears well up in my eyes. I didn’t see a community, I saw a huge gathering of family that supports each other. I felt proud to be part of this family.”
-Robert E. Dukes

“This will be my first Atlanta pride.”
-Tia Burton

“I am a school counselor. I am 40 years old. My training was and is always about being an advocate, an upstander and an ally. Those terms weren’t used when I was in grad school, but the message certainly was there and it has always stuck with me. A few short years ago, my co counselor and I were approached by a middle school student to see if it was “OK” to start a GSA in our middle school. This grade seven kiddo also told us “GSA” was outdated in name and would like it to be promoted as the “Rainbow Club” for LGBTQ+ and allies. We received immediate support from admin. The Rainbow Club, now known officially as LGBTQ+ is thriving. Last year, our middle school kiddos asked if we could be officially represented as a school at Pride in Atlanta. As a school, we embraced this. Last year was our first year at Pride. We did our best. We created T-shirts, bought every flag we could when we arrived. We even had a banner. We marched at Pride alongside Angel Action with our kiddos, parents, staff and faculty. I worried about the ‘freedom of speech’ corner and my middle and high school kiddos. How would the hate speech impact them? I could not have been more happy for the community of Angel Action Atlanta and the crowd that embraced us. They recognized immediately a young crowd marching and cheered us on, protected us and loved us. I am proud to say we are marching again this year, larger and louder. “
-Lanie Cox

“I went to my first Atlanta Pride three years ago with friends from work and it felt amazing. I had always felt kinda out of place in the gay community, but at Pride I felt accepted with open arms. I have been every year since and will continue to go every year.”
-Christopher Lee Lovett

“I was marching with PFLAG ATL and the crowd was going wild! I really felt the love! Then our group came upon ‘the haters.’ Luckily for us, the Pansy Patrol was out doing their thing, helping to create a safe space for the LGBTQ community through a non-violent, proactive act of love. I was so moved by their presence that I took my PFLAG sign and joined them. It was a life-changing event. Now I look forward to working with Thom and the rest of the pansies every year!”
-Deb Wise

“It was a typical hot October day, I signed up to volunteer with HRC’s booth and gathered friends and family to come out, not knowing what to expect for my first Pride. Everyone was so welcoming. It was one of the greatest days I’ve experienced in my lifetime. The park was full of laughter, and love, and Pride. It’s become one of my favorite memories and I look forward to it every year now.”
-Joey Layne Andrews