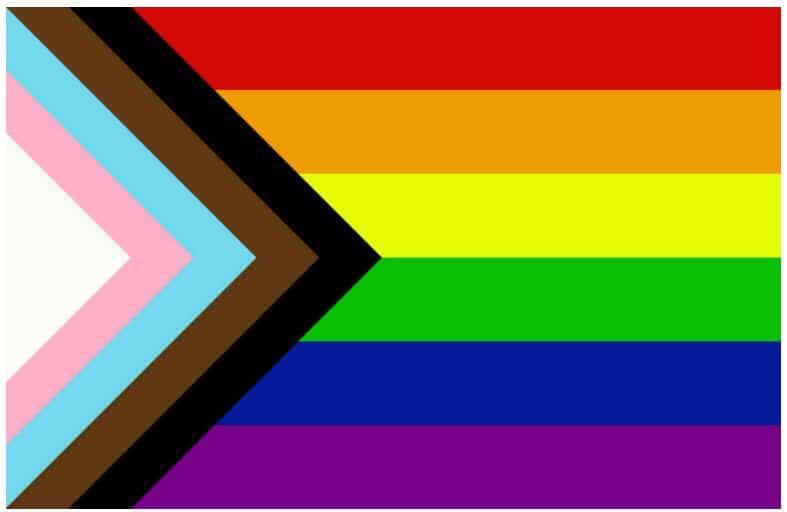 A suggested redesigned of the famous LGBTQ Pride flag is drawing fanfare and funds in equal amounts. The new Pride Flag, if adopted, would celebrate “inclusion and progression,” according to the artist, Daniel Quasar.

Quasar is a Portland, Oregon artist, who prefers the xe/xem/xyr pronouns. Quasar’s design remixes the original sextet of colors premiered by original rainbow flag designer Gilbert Baker. Quasar’s flag also employs brown and black stripes in the composition. The brown-black stripes were suggested as possible additions to the Pride flag – symbolizing the important role of people of color in the LGBTQ community.

Additionally, the Quasar flag features a right-facing trans flag, symbolizing progress and advancement (while also symbolizing that there is a long way to go).

In interviews, Quasar stated that the purpose of the new flag was not to supplant or replace the original Pride flag.

Rather, the Quasar flag was designed to highlight a larger, more accepting community.

On the project’s Kickstarter page, Quasar wrote that

“When the Pride flag was recreated in the last year to include both black/brown stripes as well as the trans stripes included this year, I wanted to see if there could be more emphasis in the design of the flag to give it more meaning. The initial idea was important because I felt like I could bring something to the table when it came to the way the flag was shifting within the community. I am a designer and I wanted to make a change where I saw there was an opportunity. A positive change, in my mind at least.”

In another interview, Quasar said: “We need to always keep progress moving forward in all aspects of our community.”